Surfing YouTube & bingeing on Netflix this holiday? CWR's Chan unwraps the hidden dangers of our runaway data use for our planet 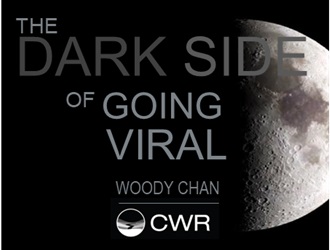 Every byte of data requires energy & water to generate & transfer, from data centres to cell towers to our devices. As the internet grows, so does its carbon & water footprint
Despacito's carbon footprint on YouTube adds up to the annual emissions of 100,000 taxis, with >400 Olympic swimming pools of water used; but just one day of Netflix globally triples that
Our rapidly expanding internet & cloud is widening our emissions gap & needs an urgent rethink; start by bingeing on medium quality & download instead of stream!

This holiday season – as you lie on your couch bingeing on Netflix after Christmas dinner, or start a long online gaming session with your friends – we have worrying news. Every time we use data, we are adding to carbon emissions and using water. So as COP24 rounds off in Katowice we look out-of-the-box at our trending digital lifestyle to see where we can cut emissions and save water.

Every byte of data requires energy to generate and transfer, from data centres to cell towers to our devices. As the internet boomed over the past decade, so has its energy consumption and carbon footprint.

As the internet boomed over the past decade, so has its energy consumption & carbon footprint

Take the song “Despacito” as an example, which has been played more than 5 billion times globally on YouTube.  According to the Financial Times, googling the song activates between six and eight data centres around the world, which together deliver a link to information about that pop song within a fraction of a second. Based on the current composition of the world’s electricity production, and the level of emissions from the average data centre, “Despacito”’s carbon footprint is roughly the equivalent of the annual emissions of about 100,000 taxis.

It’s not just carbon. Building on the numbers above, we estimate that the 5+ billion views have led to 4-125 million m3 of water being withdrawn due to power generation (large range due to differences in cooling tech*). At the higher range, this is the equivalent of more than 400 Olympic-sized swimming pools. This is before taking into account the water consumed at data centres on-site for cooling purposes, which can be substantial.

All these worrying numbers are only for one video on one platform – we haven’t even crunched the numbers for the likes of “Gangnam Style” and other viral videos. So what can we do? Simply streaming the song on Spotify without watching the music video can already cut the carbon footprint by a quarter. Even better? Download the song and play it from your device.

The numbers for Netflix are also alarming, given its binge-friendly features and its longer-duration films & TV shows compared to YouTube.

In 2017, Netflix members around the world watched more than 140 million hours per day. Based on calculations from an ACEEE study from 2012**, this translates to roughly 2.2 TWh of power use from data centres to devices (assuming HD streaming). For comparison, 2.2TWh is almost three times the power use & carbon footprint of “Despacito” and equivalent to the monthly electricity use of the whole of Ireland – all this just from the world bingeing on Netflix for one day.

Just like YouTube, watching Netflix is also water intensive, even on an individual level. We estimate that if you are watching Netflix on HD for four hours in Australia, where the economy still largely runs on coal, you would be using an entire bathtub of water.

… plus you can use less data & save money!

So again, what can be done? Merely by watching Netflix on medium quality instead of HD could save more than 75% of carbon and water. What’s more, this has the added benefit of using less data and saving money!

Beyond YouTube and Netflix, our internet and “cloud” are growing at a rapid pace. The ICT sector, including our smartphones and other devices, could consume up to 20% of global electricity by 2025. China will be a major growth area – internet traffic in China will grow 3.7-fold from 2016 to 2021 and by 2021, the gigabyte equivalent of all movies ever made will cross China’s IP networks every 6 minutes. All this will require gigantic amounts of power and by extension, carbon and water.

Going viral and becoming “Instagram famous” may be the new lifestyle going forward but it has a “dark side” as it adds more gigatonnes of carbon dioxide into our atmosphere. It’s not just streaming; our addiction to fast fashion is making things worse. Instead of closing our emissions gap, we actually increased our carbon emissions in 2017 and we are not on track to keep global temperatures to below 2°C, let alone 1.5°C. Even data centre industry experts are becoming concerned, as we found recently at the 9th Annual Data Centre Dynamics (DCD) Conference in Hong Kong.

All this means we have to urgently rethink our out-of-control data economy. Downloading songs instead of streaming and watching at lower qualities will help but are there other solutions? What are brands like Google and Apple doing? How about renewable energy? We don’t have the answers now but stay tuned for next year!

Author: Woody Chan
Woody Chan leads corporate social responsibility and sustainability initiatives at foodpanda, strengthening its commitment to grow sustainably with its ecosystem of riders, merchants, and consumers. As an advocate for environmental sustainability, Woody has also participated in various speaking engagements, from TEDx talks and university seminars to industry forums and panels.
Read more from Woody Chan →
« previous
To Tea Or Not – Black, Green Or Milk?