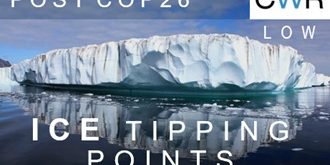 Where Are We On Ice Tipping Points Post COP26?

What state is the cryosphere in? Did COP26 help? CWR’s Dr. Low shares key takeaways from the latest report The cryosphere is in a dire state and yet the world remains complacent even after the COP26 meeting which has sets us on track for 2.4°C warming by 2100
Already at today’s warming of 1.2°C we have triggered irreversible tipping points & locked in 2-3 meters of SLR; once 2°C is passed, we lose large chunks of mountain glaciers
To avoid permanent “cryosphere collapse” we need a decade of urgent action or risk even greater SLR, the melting of Asia’s water source & mass extinction

Our world is on track for 2.4°C warming by 2100 as our 2030 targets still fall short even after the COP26 meeting according to Climate Action Tracker (CAT). That’s still far above the 2°C limit that the world should stay well below, if not 1.5°C.

Clearly there is still a “false sense of complacency” that we can allow temperatures to rise for just a bit longer to prioritise today’s economic growth over our future. But what many may not know is that at our snail’s pace of policy implementation we are pushing the cryosphere – Earth’s snow and ice regions – into abrupt or irreversible change that worsens sea level rise (SLR), extreme weather, permafrost thaw, marine acidification, and mass extinctions of marine species.

We cannot negotiate with the melting point of ice…

In November 2021,the International Cryosphere Climate Initiative (ICCI) released the “State of the Cryosphere 2021” report (SOC 2021) that summarises changes happening in the cryosphere as well as the potential devastating impacts that will occur once we trigger certain tipping points. The SOC 2021 report was reviewed and supported by nearly 50 leading cryosphere scientists, and over half of them are IPCC authors.

…most of these would be triggered even by 2°C so ‘we cannot negotiate with the melting point of ice’ & must remain close to 1.5°C

These cryosphere scientists warned that without more ambitious commitments or Nationally Determined Contributions (NDCs), we will trigger cryosphere changes that will be “permanent on all human timescales” in which the impacts are “global and overwhelming in scale”. Moreover, most of these permanent changes would be triggered even by 2°C. So, the key message is clear – ‘we cannot negotiate with the melting point of ice’ and must remain close to 1.5°C.

What’s more worrying is that the realisation of the dire state of the cryosphere has yet to penetrate the highest levels of government and industry, let alone the general public. During a COP26 meeting, a group of cryosphere scientists gathered at the ICCI’s Cryosphere Pavilion to present the latest findings on cryosphere changes and why it is so vulnerable to global warming. But sadly, these videos have yet to reach a wider audience with only < 50 views online at the time of writing this article. If you have missed them, you can watch them here.

The SOC 2021 clearly shows why we must act urgently to keep global temperatures below 2°C, if not 1.5°C. because if we don’t the loss and damage from losing our cryosphere are beyond our imagination. The main findings from the report have been summarised at the end of this article.

Already at today’s warming of 1.2°C, we have already locked-in 2-3m of SLR and the IPCC-AR6 report warns that this level of SLR cannot be ruled out by as early as 2100. Even with today’s most optimistic scenario of 1.8°C, permafrost thaw will add CO2 and methane emissions totalling around 150-200 GT CO2 by 2100; this is similar to the emissions of Canada today. Why does this matter? Carbon emissions from permafrost thaw, which is not fully accounted for in global emission budgets, will greatly reduce our carbon budget to remain below 1.5°C or 2°C.

Once 2°C is passed we lose large chunks of mountain glaciers; ~3°C the global weather pattern will become extremely unpredictable

Once 2°C is passed, we will lose large chunks of our mountain glaciers. The highest mountains such as the Himalayas, which are the water towers of Asia that provide water supplies for 1 in 2 Asians,  may halve or shrink to a third of its current size by 2300. When temperatures approach 3°C, the Atlantic Meridional Overturning Circulation (AMOC) – which acts as a motor for currents in the North Atlantic and is vital in regulating weather, will shut down and cause “severe and unpredictable disturbances to global weather pattern”. This level of warming is in line with a recent Nature survey, in which many living IPCC authors expect “the world to warm by at least 3°C by the end of the century”.

Our current emissions path is driving us to “cryosphere collapse”…

Allowing the temperature to pass 4°C-5°C by 2100 by following our current emissions path will result in rapid and essentially permanent “cryosphere collapse”, causing extreme losses and significant damages for many generations. West Antarctic Ice Sheet will collapse with 2m of SLR possible by 2100 and 5m by 2150. Our oceans will become extremely corrosive and cause mass extinction of marine species – we will never see wild cod, herring and salmon on our dinner plate again.

We need a decade of urgent action…

Clearly, these ice tipping points are too risky to bet against. The only way to slow and avert these negative impacts is to stay close to 1.5°C or below 2°C. However, we only have less than a decade to act – we must decarbonise deeper and faster by 2030. Otherwise, we are on track to trigger these adverse impacts as the findings in the SOC 2021 report make clear.

Below are the impacts we are locking in at different scenarios according to the SOC 2021 report. Also check out how these scenarios will be triggered by various warming projections according to the latest estimates from Climate Action Tracker (CAT) and which IPCC AR6’s SSPs they correspond to.

Author: Chien Tat Low
Low has extensive inter-disciplinary research experience, which although wide-ranging, focuses on identifying hotspots to facilitate better planning. At CWR, Low uses spatial modelling and statistical analysis as well as remote sensing, cartography, and geo-statistics to map and assess water risks. In addition, he helps manage CWR’s extensive network of contributors and partners. CWR is Low’s first foray outside academia and he hopes to apply his 12 years of scientific know-how toward enhancing the understanding of water risk in Asia, including spatial temporal variabilities of anthropogenic and natural factors on water resources. Previously, Low was a postdoctoral fellow at the University of Hong Kong where he devised methodologies to measure and benchmark the quality of urban life in an Asian context. As a certified GIS Professional, he also taught GIS and spatial analysis modules there. Low’s research on urban, human and environmental health is published in 11 prominent international peer-reviewed journals; he has also written a chapter in a book on managing environmental hazards. His PhD thesis on place effect on human well-being was prize-winning. Low is currently the reviewer editor for the journal “Frontiers in Environmental Informatics” and also reviews other international journals such as “Applied Geography”.
Read more from Chien Tat Low →
« previous
3 First Steps To Protect HK From Rising Seas

Next »
Are We More or Less Water Secure Post COP26?
Related Posts
8 Pollutants In The Ocean That Can Kill You
4 Ways To Get To Zero Chemical Pollution In The Ocean
2021 State of Ecology & Environment Report Review
SIWW 2022 – 3 Key Takeaways
Water Leaders Summit 2022 – Key Takeaways
Key Takeaways From Futureproofing Cities To Avoid Atlantis
The Latest anay