What ‘Xi’s Thought’ Means For Water

CWR's Hu dives into Xi's speech at China's 19th National Congress: what lies ahead for water & the environment? On 18 October 2017, China’s president Xi Jinping delivered a 3.5-hour-long speech at the 19th National Congress of the Communist Party of China (full English version here). One of the most important messages is the emphasis on the harmony between environment and economic development. One newspaper counted 89 mentions of the word ‘Environment’, compared to 70 times for ‘Economy’. Xi is determined to be the steward for China’s environment. This is probably the strongest message from a government leader, since Premier Li Keqiang’s declaration of ‘War on Pollution’ in early 2014. So, what does Xi’s Thought mean for water? We share 3 points below:

In Xi’s speech, there is no mention of a specific GDP target. But this doesn’t mean economic development is no longer important. Xi clearly stated, “Development is the underpinning and the key for solving all our country’s problems”. To meet the 2020 target of doubling GDP from the 2010 level, an average growth rate of at least 6.3% would be expected for 2018-2020. The previous 13FYP sets an annual average target of 6.5%. Judging from the country’s performance in the last three quarters of 2017 (i.e. 6.8%-6.9%), we seem on track.

…to put it simply, China wants to use less water & discharge less pollution to generate GDP

What Xi wants for his country is more than high GDP figures. He calls for ‘sound development’ that is “innovative, coordinated, green, and open” and “is for everyone”. Back in 1992, Deng Xiaoping defined the country’s principal contradiction as the conflict between ‘rising needs for material & cultural goods’ and ‘backward productivity’. This helped China open up its market and focus on GDP growth. By enshrining his Thought into the CPC’s constitution alongside Mao’s and Deng’s, Xi acknowledged the ‘unbalanced and inadequate development’ and hopes to meet ‘people’s ever-growing needs for a better life’ by moving away from the current resource-and-pollution intensive growth model.
By moving away from sole focus on GDP growth, Xi hopes to reduce the country’s ecological and environmental ‘footprints’ whilst continuing growing the economy. To put it simply, China wants to use less water and discharge less pollution to generate GDP.
Already, water use and wastewater discharge per unit GDP (constant 2004 price) have been steadily falling (see below chart). By 2020, water use per unit GDP is expected to fall by 23% from the 2015 level. Pollution levels also needs to fall to meet water quality targets and ensure the health of the ecological environment. Similar targets are also set for air emissions and energy. All of these mean no more ‘Business as Usual’. 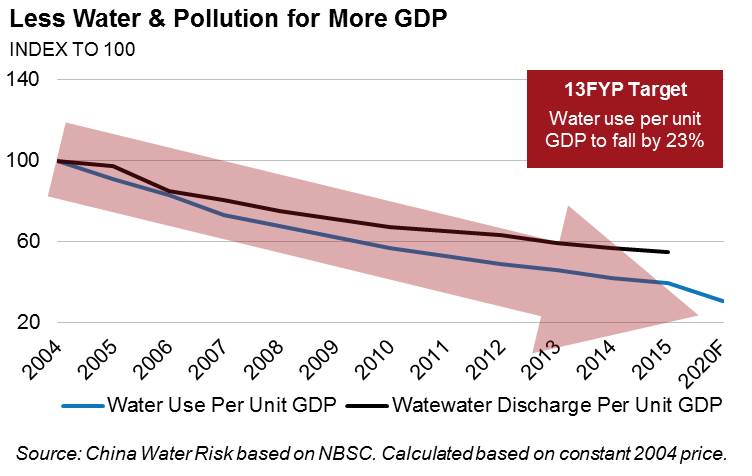 Industries are deemed to change. The broad strategy to lead China’s ‘industrial revolution’ is ‘Made in China 2025’. Since its initiation in 2015, detailed action plans and investment have been made. For instance, in a recent Ministry of Industry and Information Technology (MIIT) guiding document, 174 prioritised key technologies are identified, including 25 related to energy saving and environmental protection.
Xi thinks efforts can be made on two fronts: on the supply side, the government needs to help Chinese industries move up to the medium-high end of the global value chain and to “foster a number of world-class advanced manufacturing clusters”; and on the demand side, innovation in supply chain, sharing economy and low carbon technology as well as high-end consumption are encouraged to create new engines for future growth.

For businesses and investors, opportunities lie in both new industries that are being promoted by the government, and also technological solutions that can help traditional industries transition to the next stage. For 2017 alone, the MIIT aims to provide up to RMB39.3 billion financial support for 25 types of projects in four key areas, from innovation capacity building, better supply chain coordination, cross-industry service platform to an insurance program for the first batch of critical new materials.

Representing over 42% of China’s population and GDP, it is no surprise that the government is focusing on the Yangtze River Economic Belt (YREB) in its attempt to seek new pathways for green development. In one of Xi’s ‘14 Points’, he stressed that the government “will facilitate the development of the Yangtze Economic Belt by promoting well-coordinated environmental conservation and avoiding excessive development”.
Xi’s emphasis on more balanced & harmonious development is more than a slogan. Throughout his political career, his thinking of environment and economy has been rather consistent. From 2002 to early 2007, Xi used to be the CPC secretary of Zhejiang province. During that period, Zhejiang saw rapid economic growth but also rising pollution concerns. In various occasions, he compared ‘clean water and lush mountains’ to ‘gold and silver’. In early 2007, before moving on to his next role in Shanghai, he attributed Zhejiang’s economic success to “scientific development philosophy” and “optimisation of industry mix”. He never saw ‘dirty’ money from polluting industries as key drivers for the economy. Actions laid out in the ‘Water Ten Plan’ and YREB-specific policies including the ‘YREB Development Plan’ are trickling down to the local level.  In a recent media briefing (which we review here), China’s new Environmental Minister Li Ganjie confirmed that provincial-level ‘Ecological Red Lines’ will be set for all the 11 YREB provinces and municipalities by the end of 2017. By the end of 2018, according to a new action plan to tackle pollution in key river basins during 2016-2020, companies along the Yangtze River in key polluting industries (such as chemicals, textile dyeing, heavy metals and hazardous waste etc.) will need to conduct environmental risk assessments.
Given the significant shares of production located in the YREB (see graph above), 2016 and 2017 have been extremely tough for some companies that struggle to comply with more stringent environmental regulations. The next 2-3 years will only become more difficult if no changes are made.

Note: This year, building on the previous joint brief, we worked with MEP FECO on a second YREB policy brief. We took a deeper look at the water-nomics performance of each province, and even compared all the key industries of a selected province. We expect to publish it by early next year. So watch out for our newsletter updates.

Whether it is changing its economic mix to deliver optimum results on both economy and environment, or looking at the planning of industries at a river basin, China is trying to adopt a more holistic approach in managing both. In his speech, Xi puts pollution prevention and control at the same importance as ‘major risks’ and ‘poverty alleviation’ in order to earn “people’s approval”.

Since 2014, from the overarching ‘Water Ten Plan’, amendments of the Environmental Protection Law, to the promotion of the ‘River Chief’ system, the government’s determination to tackle pollution is evident. In 2016, environmental authorities issued over 124,000 punishments to pollution violations with total fines reaching RMB6.63 billion, 28% and 56% up from the previous years respectively. Entering 2017, actions continue to be stepped up: for daily fines alone, the MEP reported a 57% increase in number of cases during January-September compared to the same period of 2016, and total daily fines amounted to over RMB960 million.

Other than bigger ‘sticks’, China is also using measures from EIA reform, water resource tax to permit systems, to rein in pollution. To hold polluters accountable, Xi called for improvement in credibility assessment systems and ‘mandatory release of environmental information’. With regards to Pollution Discharge Permits, a national platform has been set up to offer real-time status of permits under assessment and approved. Each company is assigned with a unique 18-digit number, acting as both a business registration number and a social creditability number. With this number or the company name, the public can check all the violation records (including pollution violation) associated with that company in the new ‘Credit China’ online platform.
Moreover, a new top-level body is proposed to manage state-owned natural resource assets and the environment. Although there’s still not much detail on how the new governing body will look like, a breakthrough in the current ‘nine dragons managing water’ situation may well come true.

For water, a holistic approach also means looking at water from ‘mountain top to the sea’. However, climate change has led to melting glaciers in the source regions of many key rivers in China. Water resource management has been recognised as an important part of climate adaptation efforts in China, as shown in the latest NDRC report on ‘China’s Policies and Actions for Addressing Climate Change’.
From Davos to the 19th National Congress, Xi assured the world that China is commited to lead in climate actions. From cutting overcapacity in coal (>150 million tonnes in 2017), renewable energy investment, green bonds to electronic vehicles, China has indeed proven its leading role.
However, as shown in CWR report on rare earth mining, due to China’s dominance in rare earths and the existence of black markets, China’s water and soil has suffered from serious pollution to meet the global appetite for these critical raw materials. The ‘war on pollution’ will bring inevitable changes to the global supply chain, if the low carbon industries cannot clean up their sourcing.

Moreover, climate adaptation finance is still lacking, especially with limited private sector participation and investment. Private financing only accounted for 7% of all the investment on water resources projects in 2016. Thanks to recent promotion of PPP, private investment was up by 126% from 2015 to 2016. But, more can be done, given the huge sum required to build water & climate-resilient infrastructure.
The natural and economic linkages between climate and water means that, only by joining actions on both fronts can we build a ‘Beautiful China’ even if the tide rises up in the future.

Author: Feng Hu
Having previously led CWR’s work on water-nomics, Feng now sits on our advisory panel to help us push the conversation on integrating water considerations in planning sustainable transition and mobilising finance toward climate and water resilience. Feng currently works on ESG advisory at a regional financial institution. Prior to that, Feng worked as Sustainable Finance Research Manager APAC at V.E, part of Moody’s ESG Solutions. During his time at CWR, he initiated and led projects for CWR including the joint policy briefs with China’s Foreign Economic Cooperation Office of the Ministry of Environmental Protection on the water-nomics of the Yangtze River Economic Belt. Feng expanded the water-nomics conversation beyond China by co-authoring CWR’s seminal report “No Water No Growth – Does Asia Have Enough Water To Develop?”. He has given talks on water-nomics and other water issues at international conferences, academic symposiums, corporate trainings and investor forums. Previously, Feng also sat on the Technical Working Group of the Initiative for Climate Action Transparency (ICAT) and worked as a senior carbon auditor on various types of climate change mitigation projects across Asia and Africa. Feng holds two MSc degrees – one in Finance (Economic Policy) from SOAS University of London and the other in Sustainable Resource Management from Technical University of Munich – and a BSc degree in Environmental Science from Zhejiang University.
Read more from Feng Hu →
« previous
5 Facts About The Tarim River

Next »
Green Development For A Beautiful China
Related Posts
High Flying Carbon Emissions – Rethink Your Next Trip
Tis The Season To Be Worried: Our Online Habits
Fast & Furious: Online Shopping’s toxic ways
Will MTR Sink With The Polar Express?
8 Empty Promises & Hypocrisies – An Asian Perspective on COP26
Are We More or Less Water Secure Post COP26?
The Latest anay