Water Treaties – A Question of Rights Conspicuous absence of a legally binding international treaty to govern shared water resources
Abundance of bilateral and multilateral treaties with the exception of China
Laos, Thailand, Vietnam, Cambodia, Pakistan and Bangladesh all have water dependency ratios >40

In February 2012, China Water Risk provided an overview of potential geopolitical risk in relation to the transboundary nature of some of Asia’s main water arteries, many of which are sourced in the Tibetan Plateau. See Geopolitical Risks: Transboundary Rivers. The article focused largely on China and the proliferation of dams in the upper reaches of its shared rivers in South and South East Asia. A brief look at the issue however quickly raises the question of governance; that is water treaties. What are they, where are they in place and are they effective?

According to the UN, over 90 per cent of the world’s population lives in countries that share water basins. Globally, there are some 263 transboundary lake and river basins covering nearly one half of the Earth’s land surface and accounting for an estimated 60 per cent of global freshwater ﬂow1. In addition, about two billion people worldwide depend on groundwater, which includes approximately 300 transboundary aquifer systems.2

The importance of transboundary waters to individual states is embodied in the interdependencies created by such shared resources and this cannot be understated; now more then ever, as access to freshwater supplies globally face increasing challenges including skyrocketing demand, climate change, over and inefficient use of water resources and pollution.

What is perhaps surprising, is that despite the extent of shared water resources globally and there obvious importance, there are no international legally binding treaties in force today.  Existing treaties take the form of bilalteral or multilateral agreements usually to provide governance in relation to a particular river basin.

In Asia, where water availability per capita is the lowest globally and declining, the situation is acute.  With over 50 percent of the world’s population and rising, and about 27 percent of its freshwater water resources, South and South East Asia for example face increasing pressure on already scarce supplies due to economic development, rapid urbanization and population growth. A quick look at some of the main river basins in this region (expanding on February’s article), reveal the extent to which these valuable resources are shared. 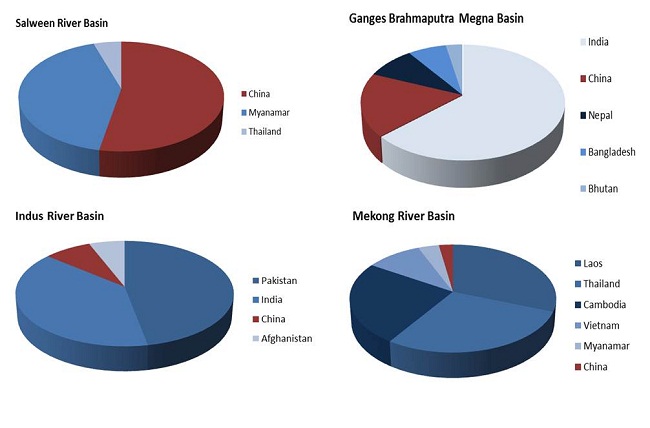 There are currently two main international treaties that provide principles for the governance of transboundary waters: the 1997 UN Convention on the Non-Navigational Uses of International Watercourses and the 2004 Berlin Rules. The UN Convention is by and large based on the International Law Association’s (ILA) 1966 Helsinki Rules3. As a framework convention, it provides the principles and rules that may be applied to suit the characteristics of specific international watercourses, which can then be further developed through protocols. Two important premises are: the principles of equitable and reasonable utilisation of shared watercourses; and the obligation to do no harm.

Through academic discussion, analysis of wording in the articles and case law, the latter principle is considered as subordinate to the former and is4 thus postulated as one of the reasons why the treaty has failed to gain sufficient signatories to enter into force5. At the time of writing there were 24 parties in varying states of ratification, acceptance, approval or accession, 35 instruments of ratification or accession are needed for the Convention to enter into force. No South and South East Asian countries are either a party to, or signatory to the convention.

The UN reports however, that in part because of its provenance, the Convention is widely viewed as a codification of customary international law with respect to at least three of the obligations it embodies, namely: i) equitable and reasonable utilization; ii) prevention of significant harm; and iii) prior notification of planned measures. These and other provisions of the Convention have, the UN indicates, influenced the negotiation of treaties concerning international watercourses.

In 2004, the ILA introduced the Berlin Rules on Water Resources, which goes beyond the UN Convention and the earlier Helsinki Rules. As legal scholar Salman M A Salman notes6, whereas the Helsinki Rules and the UN Convention establish and emphasize the right of each riparian state to a reasonable and equitable share in the beneﬁcial uses of the waters of an international drainage basin, the Berlin Rules emphasize the ‘obligation’ to manage the shared watercourse in an equitable and reasonable manner7. Importantly the principle of doing no harm, which was considered subordinate to the principles of equitable and reasonable utilization in the UN Convention, is worded in articles of Rules, such that it is importantly considered of equal standing.

In Europe, the water treaty landscape is a little different in large part due to the 1992 UNECE Convention on the Protection and Use of Transboundary Watercourses and International Lakes (Water Convention). The UNECE convention is also a framework convention and is intended as a key instrument for developing co-operation on the management and protection of transboundary waters relevant to UNECE member states8. It has been the basis for adoption of many bilateral and multilateral agreements, such that its success has convinced its Parties to adopt an amendment opening it up for accession by all United Nations Member States, not just UNECE states.

Bilateral and multilateral treaties in abundance

Since 1948, over 300 international water agreements have been signed,9,10 however, as Salman notes , with the exception of some rivers in Europe, none of the major basins in the world are governed by an agreement encompassing all states with interests11. Indeed about two thirds of the world’s 263 international river basins, plus transboundary aquifer systems, lack any type of cooperative management framework12. Clearly, an alarming state of affairs given the importance of water to us all.

Furthermore, although the UN Convention defines a watercourse as including groundwater hydrologically connected with surface water, the transboundary nature of many of the world’s aquifers, and our dependency on them for water supplies has to date been all but forgotten.

As a result, managing transboundary waterways is ultimately left to individual countries and states to make agreements with their neighbours. The obvious problem with this approach is the exclusion of some countries which may potentially be affected. As renowned water expert Peter Gleick points out13, the majority of such treaties are bilateral, thus many affected states may not be a party to specific treaty agreements.

The Treaty’s that do exist cover a range of issues including flood control, hydroelectricity, industrial uses, navigation, pollution and fishing, only 37% are estimated to address water allocation14. Furthermore experts suggest that key requirements are frequently omitted15.

In the region, of 27 treaties (Table 1 and 2) have been signed since 1954, covering a range of issues and various commitment periods in relation to the Indus, GBM and Mekong River basins, of which China has been signatory to only two. China’s main water treaties are/have been with Russia, Mongolia, North Korea and Kazakhstan (Table 2).

In addition to the treaties themsleves, globally, there are well over 30 transboundary water management organsiations, relativley few however are in Asia, which is home to the Mekong River Commission (Cambodia, Laos Thailand and Vietnam) , the Indus River Commission between (India and Pakistan) and the Joint Rivers Commission (India and Bangladesh).

It’s easy to speculate why China has not generally entered into water agreements with its southern neighbours, despite the international waters in its domain. Indeed, China is reportedly reluctant to even allow these downstream riparian states access to inspect its upstream water projects on international rivers18. A look at water dependency ratios, that is the extent to which a country depend on external water resouces, make for interesting reading. Clearly, although China faces a water crisis at home, it is not reliant on its neighbours for water supplies, in the same way that many of its neighbours are. A first glance at the issue of water treaties in the region, thus seem to indicate that there is little political will in China to enter into equitable water sharing agreements. This may or may mote be true, however the issue is undoubtedly complex; neighboring states are themselves often in conflict with each other over shared water resources and climate change and transboundary aquifers add a whole new dimension to the problem.

China’s lack of presence in bilateral and multilateral treaties in South and South East Asia is nevertheless another elephant in the room along with the damming of shared water resources – watch out for more on these issues in coming months.

3The Helsinki Rules were introduced by the International Law Association in 1966, providing a code of conduct with respect to the uses of waters of international

5The Convention shall enter into force on the ninetieth day following the date of deposit of the thirty-fifth instrument of ratification, acceptance, approval or accession with the Secretary-General of the United Nations

Author: China Water Risk
We believe regardless of whether we care for the environment that water risks affect us all – as investors, businesses and individuals. Water risks are fundamental to future decision making and growth patterns in global economies. Water scarcity has emerged as a critical sustainability issue for China's economy and since water powers the economy, we aim to highlight these risks inherent in each sector. In addition, we write about current trends in the global water industry, analyze changes occurring both regionally and globally, as well as providing explanations on the new technologies that are revolutionizing this industry.
Read more from China Water Risk →
« previous
Government Issues Stark Warning

Next »
Winsway: Where are the Water Risks?
Related Posts
8 Pollutants In The Ocean That Can Kill You
4 Ways To Get To Zero Chemical Pollution In The Ocean
2021 State of Ecology & Environment Report Review
SIWW 2022 – 3 Key Takeaways
Water Leaders Summit 2022 – Key Takeaways
Key Takeaways From Futureproofing Cities To Avoid Atlantis
The Latest anay