The recent publication of the Intergovernmental Panel on Climate Change AR5 report put climate change and its impacts back in the spotlight. Its key takeaways: increasing atmospheric & oceanic temperatures; global glacier mass loss and rising sea levels. A report by the Chinese Academy of Sciences in May 2014 confirms that glaciers in the Qinghai-Tibet Plateau have shrunk by 15% over the last 30 years. This is China’s largest source of surface freshwater reserves. 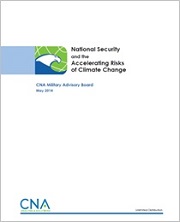 Given these significant risks, one would think that there would be more action to mitigate them and ensure resource security but “there is climate change fatigue”, as Samuel Kwong, Vice Chairman of the Chartered Institute of Water and Environment Managers (CIWEM) in Hong Kong said at the CIWEM conference in Hong Kong last month.
This ‘fatigue’ may soon get a new breath of life with the recently published report  by 15 retired US Generals and 1 retired British Navy Admiral (the “Generals”) who comprise  the CNA Military Advisory Board. The report, “National Security and the Accelerating Risks of Climate Change”, highlights the risks posed to national security by climate change.
Risks raised reflect the black swan risks identified by China Water Risk (CWR) (get the big picture here). The report also goes beyond the ‘siloed’ carbon view of climate change, looking at water security, food security, energy security and national security.
The US is not the only country looking into these risks and their interlinkages, China is as well.

China is acting to avoid these black swan risks by ensuring sufficient water. The State Council announced that 172 water conservation projects to be launched before 2020, increasing water supply by 80 billion m³ per annum. This is to ensure that water demand in 2020 will be met. Moreover, these projects will also save 26 billion m³ of agriculture water through expanding irrigation and increasing irrigation efficiency, ensuring enough water for food production and thus food security.
In addition, new conservation fee standards will be levied on Chinese businesses (both state-owned and private), ranging from RMB 2.00 – 2.50 depending on location. Also, the Ministry of Land resources will be increasing geological environment monitoring activities and supervision, particularly in underground & mine geological environments.
Most recently, the “Action Plan on Energy Saving and Low Carbon Development for 2014-2015”  published on 26 May 2014 calls for cutback in excess capacity in the steel sector by 15 million tonnes and cement by 100 million tonnes by the end of 2015. Both energy & water intensive sectors as well as highly polluting (air & water).
All of these actions move China towards a more water secure future making military action less likely.
Back to the Generals and their report, here is what they have to say:

Climate change: now a “catalyst for instability & conflict”, rather than a “threat multiplier” previously

In the first report in 2007 (by the then CNA Military Advisory Board), climate change was classified as a ‘threat multiplier”. In 2014, climate change is now a “catalyst for instability and conflict”.
Why has this shift occurred?

“climate change, once considered an issue for a distant future has moved firmly into the present”

One reason is that the climate change timeline has accelerated and the world was not expecting that. We are already seeing climate change impacts, such as extreme weather, which is resulting in food shortages, mass migration and more. For more on climate change’s impact to farming, food & communities see here. As the Generals say, “climate change, once considered an issue for a distant future has moved firmly into the present.”

Another cause for this shift is rapid and increasing global urbanisation. The US National Intelligence Council expects that global population growth by 2030 will result in food demand increasing 30% and energy demand by 50%. These growing demands will further stress already limited resources, constrain development and increase competition among agriculture & energy production. This increased competition will mean securing raw materials, such as water & land, will be crucial. The pursuit of and how these finite resources (water, food & energy) will be managed between countries poses security threats. There are no current substitutes for these resources and without them human sustenance is at risk so, ensuring their security is of paramount importance to countries. 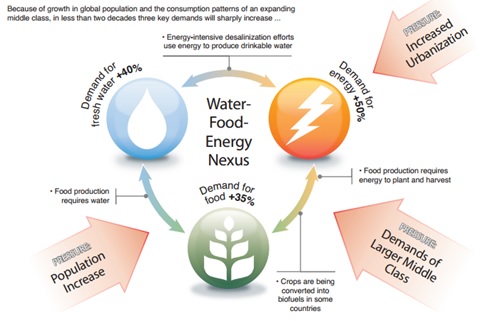 The Generals highlighted four key risk areas: economic, social, military and infrastructure. The military has a role and vested interest in all of these areas.

According to the 2014 US National Climate Assessment, “The observed warming and other climatic changes are triggering wide-ranging impacts in every groin of our country and throughout our economy…” The Generals add that most of the US economic sectors as well as international trade will be affected.  CWR has written about China’s climate and weather impacts on global trade here and here.

The projected impacts of climate change will stress social support systems such as first responders, increasing the use of military and private sector support.

The impacts of climate change are going to strain military forces in the coming decades. Already the military is used to respond to extreme weather incidents and as the frequency of incidents increases, due to climate change, more military resources will be required.

This will affect baseline readiness.

The report also highlights that these threats are not limited to US soil. US military response to extreme weather events will also increase in frequency abroad, further straining military resources. “Climate change impacts transcend international borders and geographic areas of responsibility”, says the report.

In Asia, there are tensions between China and India over the Brahmaputra River and South East Asian countries over the Mekong River (more on transboundary & third pole risks here and water rights here). These issues are on Asian minds and were discussed at the AIDF Water Security Summit 2014. The key is to avoid trigger points, which could escalate such tensions into conflict, such as water wars.

Critical infrastructure is vital to ensure physical safety, the economy and everyday life. In the US, critical infrastructure (such as bridges, roads & power generating facilities) is at risk from the impacts of climate change, in particular extreme weather (droughts, flood & extreme heat). Rebuilding damaged infrastructure comes at great economic cost and is time & resource consuming.  For example hurricane Sandy that hit the US in 2013 caused an estimated USD 50 billion in damage, including 650,000 damaged or destroyed homes and left more than 8 million people without power.

The report also highlighted that US infrastructure risk is not just domestic but also abroad. General Paul J. kern, USA (Ret.) points out, “We should also be looking at out overseas installations, particularly facilities in Japan along the coast,” he adds “One of my concerns is that we get so focused on the continental United States that we don’t look outside our borders”.

Asia has 15 of the world’s 20 largest urban areas (see map below) and most of them are on the coast or in low lying areas. Rising sea levels means these 15 cities are very vulnerable to infrastructure damage. This could impact the US through supply chain disruption, economic losses and aid deployment. In order to mitigate these infrastructure related risks the Generals recommend more cross sector collaboration between the government and the private sector as most of the US’ critical infrastructure is privately owned.

According to the report, actions by the US and the international community have been insufficient to adapt to climate change challenges. Moreover, the Generals warn that when thinking about climate change “we must guard against a failure of imagination.”
The report makes six recommendations:

In the US, the report has already had an impact. Pentagon officials said the report would affect military policy. “The department certainly agrees that climate change is having an impact on national security, whether by increasing global instability, by opening the Arctic or by increasing sea level and storm surge near our coastal installations,” John Conger, the Pentagon’s deputy under secretary of defense for installations and environment, said in a statement.
“We are actively integrating climate considerations across the full spectrum of our activities to ensure a ready and resilient force.”

China – long way to go to in climate change adaptation

To limit these costs, China must implement adaptive climate change policies in its 13th Five Year Plan, for which planning starts soon. However, Xu Yinlong (a member of the Scientific Steering Committee leading the UNEP’s Programme of Research on Climate Change Vulnerability, Impacts and Adaptation) said there is still no clear understanding of what adaptation to climate change is in China.

Pursuit of clean energy could trigger geopolitical risks with dam building, which could damage watersheds and exacerbate water scarcity

As mentioned previously, China is trying to tackle pollution. The failure of which could result in social unrest given that 86.8% are concerned about food safety and drinking water.  On top of this, smog persists and China needs to consider how it expands its energy production capacity which is currently highly water intensive. A switch to cleaner hydro could cause geopolitical tensions with neighbouring countries. As it is, China is already looking to increase its hydropower capacity from 216GW in 2010 to 568GW in 2030. Not only would this damage watersheds and exacerbate water scarcity (more on rivers & dams  here), many of these dams will be constructed in the Qinghai-Tibet plateau where the glaciers are shrinking. Moreover, many of the dams on the plateau are also located in zones with a moderate to very high level of seismic hazard (more on earthquakes & dams here).

Multilateral engagement across countries is necessary

Climate change does not necessarily lead to conflict. As General Keith J. Stalder says, ‘Because of the interconnectedness of the threat, however, climate change affords the United States the opportunity to engage with other nations”.

“[climate change] has no concept of what a border is”

The Chinese government is pursuing multiple stratagems to avoid such conflict. Indeed the shrinking of the glaciers in China’s largest surface freshwater reserves, the Qinghai-Tibet Plateau by 8,000km2  is concerning – an area equivalent to 11.5 Singapores. This not only affects the 250 million people in China who directly rely on the meltwater but also up to 500 million people in South Asia. This is not China’s issue alone. There is opportunity for multilateral engagements, which would be at least a start in a regional climate change strategy.
“Climate change is a complex & multi-decade challenge”, as Michael Chertoff (Former Secretary of Homeland Security) & Leon Panetta (Former Secretary of Defense) say in the report. It remains to be seen if the world will be able to successfully manage climate change and avoid conflict.

Author: Dawn McGregor
Dawn leads CWR’s work to help corporates navigate increasingly disruptive & material risks from water & climate threats, as well as transitional risks in the supply chain arising from new regulations in China. Here, Dawn engages extensively with the global fashion industry delivering on-ground workshops in China to keynotes and strategic input at European HQs. She has written at length on the end of dirty and thirsty fast fashion and her report to overcome gaps between brands and manufacturers for a clean and circular future inspired the industry to create a new wastewater tool. Dawn also works closely with the property and tourism sectors where she not only conducts strategic assessments of their exposure but builds collective action toward resilience via closed door working groups and invite-only events. Having helped build CWR, Dawn is a frequent keynote, panellist & moderator at events, including being twice selected as the lead-rapporteur at World Water Week. Her articles are cited in various industry publications including the UN’s ‘World Without Water’. Dawn previously worked in a global investment bank assessing geo-political risk, crisis management and business resiliency. She was born and bred in Hong Kong and has lived in France, England, Singapore and Beijing.
Read more from Dawn McGregor →
« previous
Dams in Earthquake Zones