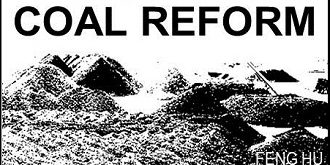 Coal is often blamed for the black smog lingering over Beijing. Since China declared war on pollution, regulations have been put in place to solve air pollution from burning coal. But what will actually drive coal reform is water. The government knows this and coal reform is needed to protect limited water resources.

Over 50% of industrial water is used in coal and related industries. Moreover, coal and coal-related industries such as thermal power, mining, steel, cement and chemical have all been singled out by the MEP amongst the 16 highly polluting industries. Given six out of these 16 industries are related to coal, it is not difficult to see why the War on Pollution means a coal clean-up. Moreover, a recent MEP study revealed the external environmental cost of coal in 2010 to be RMB555.54 billion. This is 2.3x of the total environmental protection expense and a quarter of coal industrial output value in 2010. The MWR’ Water-for-Coal Plan issued on 17 December 2013 pertains to the development of large scale coal bases in China and includes:

Up to 83% of China’s coal lies in water scarce and water stressed regions. As such, the government is promoting clean coal production and wants to increase the coal mine water utilization rate up to 75% by 2015 according to the Energy Development 12FYP.

Water use must be within provincial quotas

China’s top four coal mining provinces (Inner Mongolia, Shanxi, Shaanxi and Henan) produced 2.64 billion tonnes or 72% of coal production in 2012. 24 bathtubs of water are required to produce one tonne of coal yet these four provinces only have 3.9 – 28.1 bathtubs per person per day (see how thirsty coal is here)

Coal-fired power plants need large amounts of water for cooling. The Water-for-Coal Plan wants to promote air-cooling technology in power generation in water scarce regions and reduce the annual water consumption per million kW of coal-fired power installed capacity down to 2.52 million m3 or 0.1 m3 per second per million kW.

Differentiation between surface and groundwater use

Stricter use of surface water and prohibited use of groundwater is expected with the exception of mine drainage . In China, 95% of coal is mined underground and an estimated 1m3 of groundwater reserves are destroyed per tonne of coal mined. In the North China Plain, over 70% of deep and shallow groundwater is polluted.

Implementation of water efficiency measures for newly built coal-fired power plants with a “first save water, then use water mentality”

Implementation of water efficiency measures for development of coal bases

In July 2014, the Ministry of Industry & Information Technology ordered a list of companies in several polluting industries to replace/upgrade their outdated equipment and shed excess production capacity by the end of September 2014. 44 coking and 381 cement factories were named. Those not on the list but also with outdated equipment or excess capacity are expected to do the same by the end 2014.

On 17 July 2014, MEP issued the Notice on Environmental Impact Assessment of Coal-Electricity Base. It requires water resources capacity assessments based on water resources demand and allocation among all the main industries in coal-electricity bases (see our review on China’s EIA reform here)

Considering the 14 largest coal bases account for more than 90% of total coal production, this limits ways of big miners to find sufficient water for their coal production.

By the end of 12FYP, coal production will be up to 4 billion tonnes. To achieve this target, the coal industry has to adopt water-efficient measures and technologies as set out by the plan. 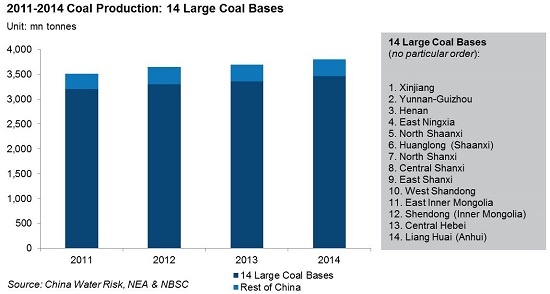 Meanwhile, the coal-to-chemical industry also faces challenges to expand because of limited water resources. According to a notice issued by NEA on 22 July 2014, China plans to ban coal-to-gas projects with annual production below 2 billion m3 and coal-to-oil projects with annual production below 1 million tonnes.
For projects above the permitted scale, location selection needs to consider water resources availability, and they are not allowed to compete for domestic, agriculture and ecological water use.

He further explained that the coal-to-gas process needs 7 m3 of water per 1,000 m3 of gas, and currently most coal-to-gas projects are located in water-scarce northwestern regions, putting great pressure on water and the environment.

Perhaps this is why Datang International Power Generation sold its coal-to-chemical and coal-to-gas operations back to their parent.

In addition to highlight water use and water efficiency, the Water-for-Coal plan also includes water pollution control for coal bases & coal-fired power plants through the treatment of wastewater & mine drainage. Therefore it is actually helping the coal industry to hold the “three red lines” in managing limited water resources.

Since Premier Li Keqiang declared war on pollution, more stringent regulations and monitoring efforts are being put in place.

It’s not going to be cheap to pollute anymore.

Just recently 10 coal-fired power plants without proper desulfurization operations were charged with big fines totaling RMB 519 million, according to a joint announcement by the MEP and NDRC in July 2014.

Once the amended Environmental Protection Law is put in force in January 2015, new “sticks” such as unlimited daily fines and criminal sentences for non-compliant companies will make pollution even more costly.

Those who cannot afford to clean up, and those that are difficult to monitor – especially small coal mines – will simply face shutdown. The government is trying to speed up such consolidation processes. On 12 May 2014, 12 central government bodies including the MEP, NDRC, MLR, MoF & NEA et al jointly issued a Circular on Stepping Up Efforts to Shut Down Small Backward Coal Mines, aiming to close down 2,000 small & “backward” coal mines across the country by the end of 2015.

On top of this, the government is signaling the phasing out of coal in certain regions. Beijing is taking the lead and has enforced the use of cleaner low-sulfur coal across all industries since 1 August 2014 according to its new local standard on coal products. It also announced the ban of coal use in its six main districts by 2020.

At the national level, State Council’s Energy Saving and Low Carbon Development for 2014-2015 Action Plan aims to abolish 0.2 million tonnes of steam coal-fired boilers and slow down coal consumption in Beijing, Tianjin, the Yangtze River Delta region and the Pearl River Delta region to return to 2012 levels. Moreover, NDRC just amended the Measures for the Supervision and Administration of Coal Trading on 30 July 2014 to ban the sale & import of inferior coal with high ash and sulfur content from 1 Sep 2014.

However, although coal is under fire on all fronts, it is here to stay. And the government has shown the way forward with the “Circular Economy Development Strategies and Action Plan” which covers nine industries including coal and coal-related industries such as power, steel, chemicals and construction.

As Mr. Wu Xinxiong, director of the National Energy Administration, stated in a national meeting on 13FYP Energy Development in June 2014, coal will continue to be China’s No.1 energy source for a long period, and the keystone for energy security is clean and high-efficient utilization of coal.

Given currently 66% of total power installed capacity comes from coal, it seems that we will hit the 12FYP target of reducing coal’s share to 65%. By 2050 the government plans to drop coal’s share down to 43%. However, despite the decrease in share, demand for coal will continue to increase in absolute terms. China’s coal imports increased significantly over the last ten years: coal import in 2013 is 17x of that in 2004.

Coal will continue to be China’s No.1 energy source for a long period, and the keystone for energy security is clean and high-efficient utilization of coal. Other than being water intensive and causing water pollution, coal also has climate change and air pollution implications. But can developing non-fossil fuels help to break the water constraint in China’s future energy development?

If we look at the available options, such as hydro (see “Avoiding Hydro Wars“), gas (see “Hydraulic Fracturing: Lessons from the US”) and nuclear (see “Inland Provinces: Nuclear At Crossroads”), they are also highly water-reliant. The key factor in China’s energy mix is actually water.

The government thinks the way forward is to develop a circular economy. For the coal industry, the key points are:

It is clear that coal is here to stay and will remain as the keystone of China’s energy security. The government knows this, and with limited water resources, coal reform is inevitable. Thus to move forward, there is no other choice but to develop a circular economy. Maybe it is time for corporates in coal & coal related industries to have a water strategy.

Author: Feng Hu
Having previously led CWR’s work on water-nomics, Feng now sits on our advisory panel to help us push the conversation on integrating water considerations in planning sustainable transition and mobilising finance toward climate and water resilience. Feng currently works on ESG advisory at a regional financial institution. Prior to that, Feng worked as Sustainable Finance Research Manager APAC at V.E, part of Moody’s ESG Solutions. During his time at CWR, he initiated and led projects for CWR including the joint policy briefs with China’s Foreign Economic Cooperation Office of the Ministry of Environmental Protection on the water-nomics of the Yangtze River Economic Belt. Feng expanded the water-nomics conversation beyond China by co-authoring CWR’s seminal report “No Water No Growth – Does Asia Have Enough Water To Develop?”. He has given talks on water-nomics and other water issues at international conferences, academic symposiums, corporate trainings and investor forums. Previously, Feng also sat on the Technical Working Group of the Initiative for Climate Action Transparency (ICAT) and worked as a senior carbon auditor on various types of climate change mitigation projects across Asia and Africa. Feng holds two MSc degrees – one in Finance (Economic Policy) from SOAS University of London and the other in Sustainable Resource Management from Technical University of Munich – and a BSc degree in Environmental Science from Zhejiang University.
Read more from Feng Hu →
« previous
Alleviating Water Scarcity in Cuba