Tough choices lie ahead in power expansion with limited water. Get a comprehensive overview in our latest report China could add 2TW of power by 2050 of which 1.2TW is water-reliant; clearly implications for water & climate
Getting the right power mix, controlling water for agriculture & coal and curbing energy demand are key
The stakes are high with hidden water risks and melting glaciers threatening Asia's watersheds

The report explores strategies towards water and energy security in China as well as provides an overview of water risk exposure across China’s power landscape.

Below is the overview from the report.
Click here for the full report. China’s waterscape is changing. Water risks in China, be they physical, economic or regulatory, have great social-economic impact and are well recognized.  China Water Risk (CWR) has encouraged a comprehensive view of such water risks since our launch in October 2011 with the aim of increasing the understanding and thereby the mitigation of such risks.

CWR believes that water cannot be considered alone, that an unsiloed approach to the challenges China faces relative to water is critical. Thus water and energy has of necessity been a key area of focus.

We can no longer ignore that rapid industrialization and rising affluence, along with an increasingly complex water-energy nexus, has put mounting pressure on the supply of water.

93% of power generation in China is water-reliant
Meanwhile, water scarce provinces (similar water resources to the Middle East) generate around half of China’s GDP

Today, power generation is the largest user of industrial water. In fact, 93% of power generation in China is water-reliant. In short, no water = no power and vice versa as we require power to clean, transport and distribute water.

Moreover, China’s water resources, arable land and energy reserves are mismatched: many of the nation’s large coal mines lie next to the North China Plain, the country’s agricultural heartland. Many of these areas also have limited water.

In China, water scarce provinces (with water resources similar to the Middle East) generate nearly half of China’s GDP, almost 40% of total agricultural output value and hold over half of China’s ensured coal reserves.

Rampant pollution has also exacerbated water scarcity and brought about concerns over soil pollution and food safety. It is inevitable that there will be conflicting needs for limited water in the future. Despite this staggering expansion, China’s per capita installed capacity will only rise to 2.6kW by 2050 which although in line with Japan’s 2.3kW/capita in 2012, is far below that of the US of 3.4kW/capita for the same year.

Can China manage this magnitude of power expansion with limited water resources? The power sector’s water risk exposure is great. Coal is currently China’s vanguard fuel yet public concern over air pollution has led to official commitments to reduce reliance on coal. However, despite the fact that coal’s share of total installed capacity is forecasted to fall below 50% by 2050, China is still looking at a significant expansion in its coal-fired fleet in absolute terms.

Already water used in coal extraction and production as well as coal-related industries including coal-fired power generation is estimated to account for over half of industrial water use in China.

Concerns over whether China has the water to extract and produce coal to meet these ambitious targets have been raised. The Ministry of Water Resources has even issued a Water-for-Coal Plan limiting the development of large coal bases subject to regional water availability.

We seek to address these water risks in this report by building on our two previous groundbreaking report collaborations with HSBC and CLSA on power generation and coal mining respectively. In addition, we have included water risk exposure profiles for coal-fired power generation, hydropower and nuclear power. Hidden and little talked about water risks brought on by aggressive wind and solar power expansion as well as other renewables are also detailed.

Water in China also increasingly is interlinked with climate issues. The rise of extreme weather events exacerbates water scarcity and divergent trends in water use and resources indicate a thirstier future:

With around three-quarters of China’s electricity generated by coal, electricity generation in China is affecting water resources not just through direct water use but indirectly through climate change impact as a result of carbon emissions.

Getting the power mix right by balancing water use, carbon emissions and their electricity generation capabilities is imperative. Achieving economic growth, social stability and ecosystem integrity is a fine balancing act for the government.

Unfortunately, climate solutions in energy such as carbon capture and storage may not be available to China due to their large water requirements and carbon-friendly, hydropower, bioenergy and concentrated solar power all require water to generate power. Meanwhile some water supply solutions such as desalination and water diversion are power intensive.

“There are no one-size-fits-all solutions …
…China will do whatever it takes to ensure water security, because only with this comes energy and food security.”

There are no one-size-fits-all solutions to China’s water-energy-climate nexus. More importantly, China’s energy choices do not only impact global climate change but affect water availability for Asia: more coal could accelerate glacial melt and more hydropower could lead to water wars given the region’s transboundary water resources including the Brahmaputra, the Mekong, the Salween and the Indus rivers.

Trade-offs between electricity generation, climate & water need to be examined holistically. Given these challenges as well as the rise in competition for water resources between energy & food, this report explores strategies towards water and energy security in China with climate & food security in mind.

Multiple strategies adopted can be grouped into a three-prong approach

No country can afford a water supply crisis let alone a food and energy crisis. China will do whatever it takes to ensure water security, because only with this comes energy and food security.

Multiple strategies will have to be adopted simultaneously across a broad spectrum of sectors. Already there are many such policies in place. In this report, we have grouped these strategies into a broad three-prong approach to facilitate understanding. Each of these “strategy-prongs” are detailed in a separate chapter. 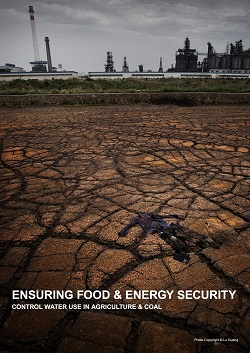 It  is important to note here that these strategies will not just impact the power sector.Industrial exposure is also significant with Chinese industry driving 85% of China’s electricity consumption. Direct exposure of China’s industrial backbone to water scarcity and pollution coupled with indirect exposure through water-reliant electricity consumption means a double whammy for multiple industries.

Steel and cement sectors which are power intensive and require coking coal as input should pay particular attention. Consequently, there are serious implications for business continuity. Investors and providers of long-term capital to industry are particularly exposed to such risks.

China’s energy mix is evolving. Already China has plans to shift its energy sources away from coal and hydropower towards less water-reliant power such as wind and solar. Water-reliant power is projected to fall from 93% to 72% by 2050. However, the magnitude of China’s power expansion still means +1.2TW of water-reliant power, equivalent to 4x the total installed capacity of Japan.

“Water-reliant power is projected to fall from 93% to 72% by 2050.
However, the magnitude of China’s power expansion still means +1.2TW of water-reliant power…
… equivalent to 4x the total installed capacity of Japan.” Nevertheless, an energy secure future in China includes the ability to supply electricity without having to rely on other countries for fuel. As such, coal will remain the vanguard due to the country’s vast coal reserves, pointing to the need to prioritise improvement and investment in water use along the whole coal chain. Also, mixed views on the availability of water for coal in China indicate the need for more disclosure and transparency in large coal bases.

On the other hand, nuclear, although carbon-friendly, is at a crossroad due to water contamination fears brought on by inland nuclear power expansion in densely populated areas such as the Yangtze River basin.

Finally, wind and solar will dominate renewable growth but improper treatment and illegal discharge of toxic wastewater and radioactive waste from rare earths required in their manufacture bring hidden water risks for important watersheds in China. The Yellow River which feeds the North and the Dongjiang River, which supplies water to important cities such as Guangzhou, Shenzhen and Hong Kong are particularly exposed to such threats.

Clearly current mining practices in rare earth ores as well as rare earths production need to be addressed, but this is not just China’s problem as “made in China” supplies the global movement for a renewable future.

In 2012, China accounted for 90% of global rare earths production; thus reliance on China is unavoidable. Japan and the US are China’s largest trading partners. The global rare earths and renewable industries need to reinvent themselves. China’s trading partners should bear some responsibility and work with China to find ways to minimise potentially disastrous impacts on China’s key watersheds.

In the most aggressive expansion scenario of wind capacity for China alone, the accumulative wastewater generated by the increased demand in rare earths could rise by 20x.

There are clear water risks for China and by extension for all of us. Tough choices lie ahead on the road towards a water and energy secure China. In reality, dispersed authority and overlapping responsibilities may hamper the right choices for water, energy and climate. Navigating China’s water energy nexus is complex and implementing strategies to address it, a long uphill battle. We hope this report helps facilitate understanding of these challenges and their global consequences.

The stakes are high, glaciers are melting and there are global ramifications
It’s time to start productive conversations to find solutions

With glaciers in the Qinghai-Tibetan Plateau shrinking 15% over the last three decades, the stakes are high. The future of China’s energy mix doesn’t just impact China; it has regional watershed implications and global climate ramifications. It is time to start productive conversations to find solutions for Asia’s water-energy-climate nexus. As the upstream riparian, China will no doubt play the central role in regional water security.

Can it ensure water & energy security whilst keeping climate change in check and at the same time side-step transboundary conflict? It’s time to take a closer look.

Author: Debra Tan
Debra heads the CWR team and has steered the CWR brand from idea to a leader in the water risk conversation globally. Reports she has written for and with financial institutions analyzing the impact of water risks on the Power, Mining, Agricultural and Textiles industries have been considered groundbreaking and instrumental in understanding not just China’s but future global water challenges. One of these led the fashion industry to nominate CWR as a finalist for the Global Leadership Awards in Sustainable Apparel; another is helping to build consensus toward water risk valuation. Debra is a prolific speaker on water risk delivering keynotes, participating in panel discussions at water prize seminars, numerous investor & industry conferences as well as G2G and academic forums. Before venturing into “water”, she worked in finance, spending over a decade as a chartered accountant and investment banker specializing in M&A and strategic advisory. Debra left banking to pursue her interest in photography and also ran and organized philanthropic and luxury holidays for a small but global private members travel network She has lived and worked in Beijing, HK, KL, London, New York and Singapore and spends her spare time exploring glaciers in Asia.
Read more from Debra Tan →
« previous
Balancing Water For Agri & Coal