The cloud uses more energy than we think; in 2012 cloud computing consumed more electricity than India generated
China is already heavily reliant on coal and yet, it's cloud infrastructure is set to grow sizeably = use more water
Business unusual methods will help drive greener growth but ultimately individual use drives cloud power

We think we are not using that much power; we think we’re being environmentally conscious by accessing emails in the cloud rather than printing them; and we think we’re using fewer resources by listening to music online instead of buying CDs. It’s easy for the average mobile device user to assume that whatever power their device draws from the wall during charging is the only power it uses until it’s charged again. Two hours’ worth of electricity could power phone calls, web-browsing, email-checking, video-viewing and music-streaming for up to 24 hours.

The truth is that wireless or cloud computing is more energy intensive than we think and we know that power requires water to generate. The daily charging of a device is just a fraction of the total energy used. There is the energy needed to manufacture the hardware and then there is the less tangible energy used by the wireless communication networks, which send data back and forth, and the data centres, which store, route and process information.

Our increasingly paperless economy, this supposedly ‘green’ way of doing business, could be anything but in its consumption of energy. According to Greenpeace International’s report “How Clean is Your Cloud”, cloud computing consumes 623 TWh of electricity annually, which is greater than the entire electricity generated in India. The existence of clouds is not energy intensive in itself, it is the frequency with which data is accessed in the cloud that drives up energy use. Simply put, the more you access data the more energy you use. According to Baliga et al’s “Green Cloud Computing: Balancing Energy in Processing, Storage and Transport” there is a point at which accessing cloud data becomes more energy intensive than data from local servers or hard drives. After this point, the increase in energy consumption is exponential (see graph). Although the energy efficiency of data centres and personal devices have improved significantly, our reliance and addiction to surfing the net and cloud usage will surely increase.

China is now the largest market for smartphone use and yet in China in 2012 only 42.30 people out of every 100 were using the internet, compared to 81.03 people in the United States

China is now the largest market for smartphone use. Its mobile communication and cloud computing infrastructure is booming, with homegrown tech brands Huawei, Alibaba, Lenovo, ZTE, Coolpad, Xiaomi, China Telecom and Oppo expanding their operations and becoming major regional players. However, (according to the World Bank)  in China in 2012 only 42.30 people out of every 100 were using the internet, compared to 81.03 people in the United States. It appears that China ‘s cloud has much more room to grow. Globally, coal accounts for around 40% of electricity generation and is forecast (according to the International Energy Agency) to supply 50% of the growth in world demand over the next 20 years. This predominance of coal has resulted in discussions about coal-powered clouds.  In 2012, Greenpeace released a report “How Clean is Your Cloud”, which shows that Apple is the most coal reliant company (see graph). 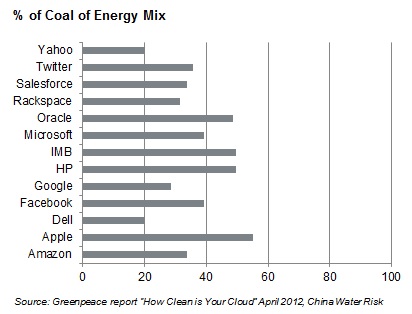 “China’s power is expected to grow from 0.97 TW in 2010 to 2.47 TW in 2030. This is equivalent to adding more power than the combined installed power generation capacity of the US, the UK and Australia today.”

China’s cloud infrastructure is still in its infancy compared with much of the rest of the world. But China’s power is expected to grow from 0.97 TW in 2010 to 2.47 TW in 2030. This is equivalent to adding more power than the combined installed power generation capacity of the US, the UK and Australia today.  The majority of this power will come from coal and  requires water to generate. This means that making cloud infrastructure energy efficient is a critical necessity. Coal is central to China’s energy policy. China is making efforts to curb carbon emissions by cutting reliance on coal from around 70% to 65% by 2017. Yet, China’s coal-fired capacity is expected to increase by ~450GW. For more on power and water see “No Water, No Power”.

Li Jie, a senior engineer of Telecommunication Research with the Institute of Ministry of Industry and Information Technology, predicts the processing capacity of China’s data centres will increase seven to 10 times in the next five years. Foreign & local tech companies such asHuawei, China Telecom, and Alibaba are all investing in cloud computing mega centres. Zero2IPO Research Center, a Chinese research institution, predicts China’s cloud computing market will grow at an annual rate of 50% in the next few years and will reach more than RMB 13.6bn by the end of 2015. TechNavio’s analysts forecast the Data Center market in China to grow at a CAGR of 19.17% over the period 2012-2016.

The good news is that companies are beginning to seriously look at renewables to power their data centres. Apple claims it has already achieved 100% renewable energy at all its data centres, while Google and Facebook have initiated plans to build 100% renewable centres of their own.

“…it is not as simple as moving away from coal alternatives such as gas, nuclear and hydro as each has its own set of serious implications.”

Unfortunately, it is not as simple as moving away from coal alternatives such as gas, nuclear and hydro as each has its own set of serious implications. There are worries globally on the impact of water aquifers from hydraulic fracking for shale gas. Recently, 19 Chinese NGOs published a report saying that hydropower stations significantly damage China’s rivers. China’s 20,000 big dams are not only disrupting river flow causing transboundary river basins to fragment but could be changing ecosystems and endangering biodiversity. Moreover, China’s hydropower expansions may bring about more geo-political tensions with neighbouring countries as transboundary rivers such as the Upper Mekong, Salween and the Brahmaputra will be dammed.
Meanwhile, China is exploring other simpler initiatives. In August 2013, a data centre in Beijing installed dual compressor technology, which achieved a 38% saving in annual electricity costs. Furthermore, China is pioneering the running of its data centres at higher temperatures, which saves energy and water. There are more ways to ensure efficient water use such as sealing data centres to prevent temperature fluctuation, using economizer mode on air conditioning units and using recycled water.

“China should follow this path of business unusual… before the cloud becomes too thirsty to handle.”

China should follow this path of business unusual, establishing greener data centres before the cloud becomes too thirsty to handle. The graph below from the Accenture report “Data Center Energy Forecast” (based on a US EPA report to congress on sever and data center energy efficiency in 2007) shows different scenarios. Clearly, business unusual is the way to go.

“…it comes down to us and our surfing habits… think before you surf!”

But eventually it comes down to us and our surfing habits. In this digital age, we are using much more power than we think, as demonstrated by our smartphone use. The more we access data, check our emails, listen to music and watch online videos, the more cloud power we use. On this World Water Day, when we are supposed to consider water and energy, think before you surf!

Author: Madeleine Ross
Madeleine is a freelance journalist. She volunteered at China Water Risk for a short time. Madeleine has worked as a media journalist at B&T Magazine and FremantleMedia Australia where she did print, video and online reporting. Madeleine has also done numerous other projects and internships including the Sydney Film Festival and independent short films. Madeleine is from Australia where she attended the University of Sydney.
Read more from Madeleine Ross →
« previous
The War on Water Pollution