“Converting coal to natural gas, however, is an extremely water-intensive process. One cubic meter of SNG requires 6 to 10 litres of freshwater to produce.”

The Plan aims to reduce particulate matter in the North China Plain by 25% and reduce coal’s share of the national energy mix to 65% by 2017. One of the plan’s key recommendations is to replace coal with cleaner natural gas, including synthetic natural gas (Syngas/SNG) converted from coal. Converting coal to natural gas, however, is an extremely water-intensive process. One cubic metre of SNG requires 6 to 10 litres (1.58-2.6 gallons) of freshwater to produce.
So in an attempt to control urban air pollution in the east, China might jeopardize its water supplies elsewhere.
Using WRI’s Aqueduct Water Risk Atlas, we overlaid the locations of these approved SNG plants on our water stress maps to assess the potential water risks and found the following:

As of September 2013, the Chinese government approved 18 large-scale SNG plants with a total capacity of 75.1 billion m3 of natural gas per year (see table below for the full project list). SNG plants require water for cooling, production, and to remove contaminants post-production.

China’s proposed SNG plants, most of them located in arid and semi-arid regions in Xinjiang and Inner Mongolia, together will consume a total of 500 to 700 million m3 of freshwater annually at full operating capacity. That’s almost 20% of the region’s total industrial water use in 2011. The plants would therefore significantly exacerbate stress in areas already experiencing chronic water shortages.
In short, over 76% of the proposed SNG capacity will face high or extremely high baseline water stress, meaning each of the locations either competes with many other users for limited available water supplies, or has very little water available at all (see map below).

Eleven of the approved plants, eight from Xinjiang Province and three from Inner Mongolia are located in catchments that do not have major reservoirs. They also face medium to high or high risk from seasonal variability. So, in the dry season, those plants may have to reduce production capacity or experience temporary outages due to the lack of resilience in water supply (see map below). Under a memorandum of understanding with the Inner Mongolia Government, Beijing will become the first Chinese city powered by SNG, receiving at least 4 billion m3 of SNG annually. This production would consume more than 32 billion litres of freshwater, enough to meet 1 million Inner Mongolians’ domestic needs for an entire year.

SNG development around the city of Ordos illustrates how these water-intensive plants can disrupt regional water security. In the middle of the Mu Us Desert, Ordos’ booming coal-to-gas bases face severe competition for water between domestic and industrial users.
Ordos’ five approved SNG plants will need approximately 140 million m3 of freshwater annually, which is around 10% of Ordos’ total water supply, or 40% of the region’s industrial water use as of 2011. Once these SNG plants are completed, they could further disrupt water supplies for farmers, herders and other industries. The government will have to decide whether alleviating air pollution from major cities in the North China Plain to more remote areas such as Inner Mongolia and Xinjiang – where most of the SNG plants are – is worth it. Additionally, since water risks will likely disrupt SNG production and new plants would further strain already stressed water resources, the national government must engage with the nation’s water authorities. The Ministry of Water Resources and Ministry of Environmental Protection are good places to start. Meanwhile, water authorities should consider tightening caps on industrial water withdrawal and water pollutant discharge or introducing stricter local environmental standards in high water-risk areas.
Over the long term, China should prioritize energy projects that face fewer environmental risks, especially from water and greenhouse gas emissions. Only then will China more successfully manage its conflict between economic growth and resource demands and find lasting energy security. 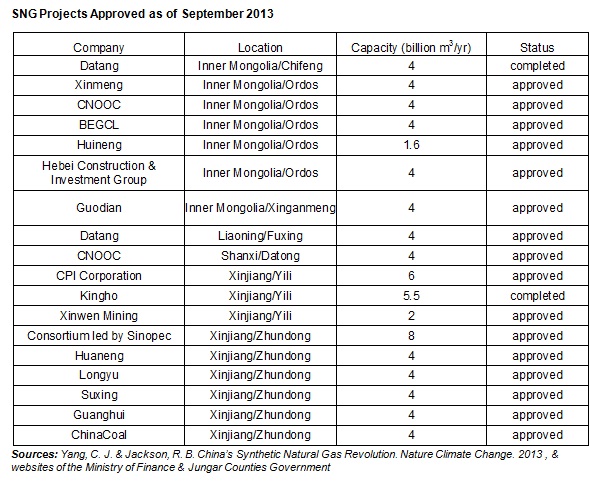 Author: Tien Shiao
Tien Shiao joined the Pacific Institute in 2016. She is a Senior Research Associate for the Corporate Sustainability team and has ten years of experience in corporate sustainability, stakeholder engagement, and water risk and stewardship. Tien’s work focuses on innovative solutions for corporate water challenges, encompassing corporate disclosure frameworks and impact metrics. Tien received a B.S. in Civil and Environmental Engineering from the University of Michigan – Ann Arbor and a Master’s degree in Environmental Management from the Yale School of Forestry and Environmental Studies. She is fluent in English and Mandarin.
Read more from Tien Shiao →

Author: Tianyi Luo
Tianyi is a Research Assistant in the Markets & Enterprise Program. He works on Aqueduct framework application, water-energy nexus analysis, and map generation and design. Tianyi also assists in Aqueduct tool development and database management. Prior to joining WRI, Tianyi worked as a research assistant developing satellite based model for evapotranspiration estimation, and supporting the work of water diplomacy and global cholera outbreak database. He also interned at HUISHANG GROUP in China assisting construction supervision and engineering design evaluation. Tianyi holds a M.S. in environmental and water resources engineering from Tufts University, and a B.E. in water supply and drainage engineering from Hefei University of Technology in China. Tianyi enjoys playing basketball in Virginia Highlands Park and painting in his apartment in Pentagon City.
Read more from Tianyi Luo →

Author: William Hua Wen
William is an Associate at the China Office of the World Resources Institute. As a member of the China Water Team, he supports WRI’s efforts to balance the water-energy nexus and to reduce carbon footprint in the urban water system. William also contributes to the Eliminating Eutrophication initiative to advance cost-effective and market-based approaches to reducing nutrient pollution. William earned a bachelor's degree in Environmental Engineering and a master's degree in Environmental Chemistry from the Southwest University of China. He previously worked for the Chongqing Environmental Protection Bureau where he assisted with the government efforts to improve water quality of the Three Gorges Reservoir.
Read more from William Hua Wen →
« previous
Underground Shifts: Subsidence Review

Next »
Irrigation: Big Gains in Small Farms
Related Posts
8 Pollutants In The Ocean That Can Kill You
4 Ways To Get To Zero Chemical Pollution In The Ocean
2021 State of Ecology & Environment Report Review
SIWW 2022 – 3 Key Takeaways
Water Leaders Summit 2022 – Key Takeaways
Key Takeaways From Futureproofing Cities To Avoid Atlantis
The Latest anay