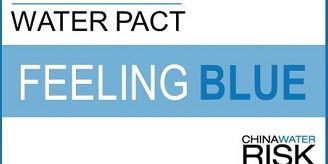 COP 21 saw the rise of water on the climate agenda but we are still feeling blue. CWR's McGregor expands Water identified as most vulnerable sector but majority of action still on carbon; focus on adaptation is growing
290 Pact coalition (nations, orgs & funding agencies) to strengthen adaptation in basins of rivers, lakes & aquifers
China to improve polluted Hai River; but no mention of key upper watersheds in Pact leaves us feeling blue

There is recognition that water will both affect and be affected by climate change regardless to what degree global temperature rise is capped at. Water was identified as the most vulnerable sector in the Intended Nationally Determined Contributions (INDCs); see more in our on-ground COP21 takeaways here. Also, there is no doubt that the situation is urgent.
However, strategies to manage climate challenges have predominantly focused on mitigation, with adaptation sitting on the side-lines. Moreover, the strategies tend to focus on carbon, energy and renewables with little on water. This is changing.

The Paris Pact is a good start
But naturally as a water organisation, we would have liked to see more on water – especially on upper watersheds

On 2 December 2015 (during COP 21), the ‘Paris Pact on Water and Climate Change Adaptation’ was announced. We are pleased to see the Pact as it is a good start and shows that water is on the rise at COP – important for securing finance. It’s worth noting here that adaptation and mitigation measures need to focus on freshwater (i.e. key upper watersheds) as much as sea-level rise. This was missing in the Pact.
There are also other positive water-related initiatives like the Business Alliance for Water and Climate Change, the Megacities Coalition on Water, Delta Coalition and Adaptation of the West African coastal areas. Naturally though, as a water organisation we would have liked to see more concrete action on water.
We would also have liked water to be mentioned in the Paris Agreement adopted by the 196 parties of the UN Framework Convention on Climate Change. And we aren’t the only ones, “As water is such an important element in climate adaptation I cannot understand why it is not specifically mentioned in the agreement” said Peter Glas, chair of the Dutch Water Authorities.

The Pact – what does it entail?

A 290 strong broad coalition of nations, river basin organisations (including cross-border), business & civil society and funding agencies are engaged in the Pact. The Pact, led by the International Network of Basins Organisations (INBO) is a commitment to strengthen adaption to climate change in the basins of rivers, lakes and aquifers. There are four main actions (see here for details in each action):

China commits to improve the polluted Hai River Basin – should it do more?

We are glad to see a commitment by China but would have hoped for more.
The Hai River is the most polluted of China’s seven major rivers, with the most Grade V water (worst pollution grade), according to China’s Ministry of Environmental Protection State of Environment Report 2014.  This is not surprising given that the Hai River at some point flows through Beijing, Tianjin and Hebei – key industrial provinces. There has been minimal year-on-year improvement in the river. Between 2013 and 2014 the Hai River saw no change of Grade I-III water whilst 1.6% of water improved from Grade V+ to Grade IV-V. Large amounts of money have been put towards cleaning the Hai, which shows how difficult it is to clean-up a river.

Large amounts of money have seen minimal improvements in the quality of the Hai
Cleaning a river means more than treating water; need pollution regulations
Water Ten Plan should help It doesn’t do any good to just treat the water; one also needs to limit/prevent pollutants entering the water.
The Water Pollution Prevention and Control Action Plan (‘Water Ten’) was released last year. It sets various strict industry and agricultural standards that will change the way water is used and managed. Beijing, Tianjin and Hebei are identified as priority areas and face tight deadlines. There are definite implications for businesses in these areas in the next two to three years. Hopefully, the Water Ten along with other new regulations should bring better results for water.
For more on what COP21 means for China see our key takeaways here. Get the latest overview of green finance in China here and see who could be paying for what climate action here.
On a different note, we are also glad to see that India, a severely water-stressed country, also made a commitment. This and the other commitments are all good starts.

#ClimateIsWater – Paris Pact is only a start

During COP21 the water world tried to elevate water’s profile, it even had its own Twitter hashtag, #ClimateIsWater.
Discussion and commentary on climate and achieving the Sustainable Development Goals (SDGs) almost always includes something on water. The press release for the Pact is no exception, “Without improved water resources management, the progress towards poverty reduction targets, the achievement of the Sustainable Development Goals, and sustainable development in all its economic, social and environmental dimensions, will be jeopardized.”  Moreover, around 80% of countries INDCs include a water component. Yet, water still usually falls under carbon’s shadow. But at least there is the Pact.

However, for the Pact to be comprehensive it needed an element that focuses on mountains, and by mountains I mean key upper watersheds that are the sources of many of the world’s waterways. We hope that China and India as key countries of the Hindu-Kush Himalayas – which covers 8 countries,  is the source of 10 major rivers that feed 17 countries in Asia (1.35 billion Asians) – will turn their attention to protecting this critical watershed.
To help this happen the media needs to broaden its reporting on water and climate change. Water in climate change is not only sea-level rising and floods, which is features mostly in the news. Glaciers, freshwater, groundwater are all key water aspects that need more attention. Not only because they have not had much attention so far but because they are some of the most vulnerable water resources.
Now is not the time for starts but for action. It’s time to dive headfirst into water to alleviate any ‘blue’ feelings.

Author: Dawn McGregor
Dawn leads CWR’s work to help corporates navigate increasingly disruptive & material risks from water & climate threats, as well as transitional risks in the supply chain arising from new regulations in China. Here, Dawn engages extensively with the global fashion industry delivering on-ground workshops in China to keynotes and strategic input at European HQs. She has written at length on the end of dirty and thirsty fast fashion and her report to overcome gaps between brands and manufacturers for a clean and circular future inspired the industry to create a new wastewater tool. Dawn also works closely with the property and tourism sectors where she not only conducts strategic assessments of their exposure but builds collective action toward resilience via closed door working groups and invite-only events. Having helped build CWR, Dawn is a frequent keynote, panellist & moderator at events, including being twice selected as the lead-rapporteur at World Water Week. Her articles are cited in various industry publications including the UN’s ‘World Without Water’. Dawn previously worked in a global investment bank assessing geo-political risk, crisis management and business resiliency. She was born and bred in Hong Kong and has lived in France, England, Singapore and Beijing.
Read more from Dawn McGregor →
« previous
Brands To Buy Over Christmas?