Naturally occurring arsenic is a problem in parts of Cambodia, India & China and poses a threat for health
Kanchan Arsenic Filter (KAF) field tests show >95% removal with no subsequent increase in concentration
Disposal of arsenic waste post remediation is an issue but simple solutions are available for developing countries

Arsenic poisoning also known as arsenicosis occurs when a person’s body contains greater than normal levels of arsenic, a semi-metallic element. The naturally occurring presence of arsenic in groundwater is a major problem in parts of Cambodia, India and China that affects millions of rural people.
These countries have rivers that flow from major mountain ranges that carry large volumes of sediment and arsenic is carried in these sediments, which are deposited in riverbanks and floodplains. The arsenic is released from the sediments and dissolves into groundwater aquifers. These contaminated waters are pumped to the surface by wells and consumed by the local population which causes arsenicosis. Arsenic use in and discharge from industry is another source of water contamination.

The “KAF Bio-Sand Filter” – how it works

The Kanchan Arsenic Filter (KAF) was developed to remove arsenic from drinking water by the Massachusetts Institute of Technology (MIT) and a Nepali NGO, Environment and Public Health Organization (ENPHO) based on 7 years of extensive inter-disciplinary laboratory and field studies in rural villages of Nepal (Ngai et al, 2006). This arsenic removal filter will remove arsenic from any source, be it natural or man-made. Basically, this design is effective anywhere there is arsenic contamination.
KAF has been designed to allow for a filter loading rate (flow rate per square meter of filter area) which has proven to be effective in laboratory and field tests. This filter loading rate has been determined to be not more than 600 litres/hour/square metre. 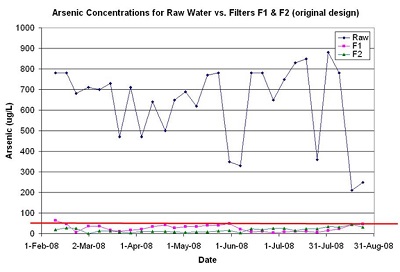 Kanchan Arsenic Filter (KAF) will remove arsenic from any source, be it natural or man-made and is effective anywhere there is arsenic contamination The phase 1 field testing results are positive for people living in rural Cambodia. The contaminated water in the field testing site contains high arsenic and phosphate levels, which must be lowered to less than 50 ppb to provide safe drinking water. KAF iron nails has been found highly effective.

Field tests show a 95-97% average removal percentage range
…in addition, there is no increase arsenic concentration over a 30 week period

The arsenic waste produced post-remediation raises further issues in developing countries. The disposal of arsenic waste is difficult because of leaching or loss of arsenic from waste can result in further contamination.

Adsorbent technology often results in the formation of arsenic-containing liquid-waste that requires a high standard of waste management for proper and safe disposal. Therefore adsorbents resulting in a solid waste, that is suitable for landfill, are preferable.
One such solid waste method suggests that arsenic remediation sludge be mixed with cow-dung so as to form methylate arsenic which then no longer poses a risk. This is similar to the use of sludge in brick making; mixing it with clay immobilises the arsenic.
Designing efficient, long lasting materials that do not require frequent regeneration (hence minimising the total volume of waste needed to be disposed of), is the best way to effectively tackle the issue of waste resulting from arsenic removal.

Arsenic and other heavy metals in China’s water & soil