Disruptions are abound as the march to a Beautiful China continues. CWR's Xu expands on how the paper industry is hit The new White Paper on the Yangtze River Economic Belt has shone a spotlight on polluting industries including paper; which is both dirty & thirsty yet China is the biggest producer globally
Due to tougher regulations such as the water resource tax reform & stricter enforcement, many provinces have experienced paper production cuts in 2018 e.g. Hebei suffered a decline of >30%
Despite improvements, the paper industry still accounts for 7.5% of China's industrial freshwater extraction & water reuse rate is still short of requirements; are there more disruptions ahead?

On 14 January 2020, the Supreme People’s Procuratorate published a white paper on the green development of the Yangtze River Economic Belt (YREB), which shows that in 2019, there are 7,084 people arrested for 4,336 environmental crimes, with an increase of 43.05% and 44.39% respectively compared to 2018. The white paper is not only a work summary of procuratorates, but also signals stricter enforcement in future. The YREB is clearly China’s economic powerhouse, accounting for 45% of China’s GDP and 43% of China’s population. The green development of the YREB is important to both China and the world. CWR has just published a scientific journal article on the water-nomics of the YREB. Unfortunately it is only in Chinese currently. However, most of the analysis can be found in our report here.

The YREB is the heartland of many important industries, out of which the paper industry is definitely one of the most polluting industries.

During Christmas, we published The Hidden Cost Of Our Christmas Cards & Crackers, in which we introduced how environmentally costly the paper industry is. China takes a large share in both global paper production and consumption. The shares could still go up given China’s increasing population, urbanisation and promising economy. This time we are going to discuss what China is doing to tackle paper industry pollution and balance between environment and economic development.

Ever since the ideas of ecological civilisation and Beautiful China were put on the table, economic growth is no longer prioritised and environmental capacity has become the first consideration in planning. The “Three Red Lines” for water, for instance, stipulate water use caps for each province by 2020 and 2030.

For the paper industry, the Chinese government has issued a series of policies to support the green transitioning as shown below. Besides, other comprehensive regulations/reforms have also impacted the paper industry. Below are the latest numbers for provincial paper production (only provinces with production over 1mn tonnes). It shows that many provinces have experienced production cuts in 2018 including Hebei, Henan, Tianjin and Shandong, which are all pilot provinces for the water resource tax reform.

In particular, Hebei suffered the greatest decline of 30.98%, which may be attributable to the high groundwater price in the water resource tax reform (enterprises in Hebei rely heavily on groundwater). 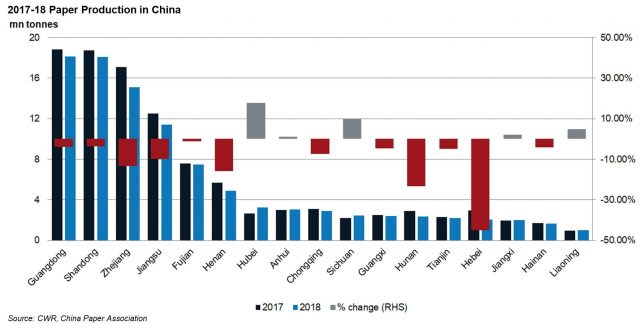 Clear improvement but more is needed…

Partly due to the tightening regulatory landscape, the environmental performances of paper enterprises have improved. During the 12FYP, both freshwater extraction and wastewater discharge have progressively declined and the discharge of main pollutants have either declined rapidly (COD, SO2) or remained stable (ammonia Nitrogen, NOX).

During the 12FYP, both freshwater extraction & wastewater discharge have progressively declined…

…discharge of main pollutants have either declined or stabilised However, the paper industry in 2015 accounted for 7.5% of China’s total industrial freshwater extraction

Elsewhere, the water reuse rate in the paper industry has increased from 44.6% (2005) to 75.5% (2015), yet there is still some distance from the lowest standard of 80% stipulated in the ‘Appraisal System for Cleaner Production – Pulp and Paper Industry’. Clearly more work is needed.

2020 is the final year of the 13FYP, and also the examination year for environmental targets. The paper industry, as a resource consuming and polluting industry, could potentially be the focus in water use efficiency improvement and pollution prevention, leading to a wave of regulatory shocks to the industry. There is still a long uphill journey for the green transitioning of the paper industry in China.

Author: Yuanchao Xu
Yuanchao uses his analytical proficiencies towards the assessment and visualization of water risks for China Water Risk. Prior to joining, Yuanchao was based in Europe completing the Erasmus Mundus Master Program where he specialsed in hydro-informatics and water management. He applied his skills in climate forecasting and water resource modelling to the EUPORIAS project with DHI (Danish Hydraulic Institute) which resulted in a conference paper on seasonal climate forecasting. Building on this work, he went on to develop hyfo, an open-source R programme for climate scientists and modellers to analyse and visualize data. Yuanchao’s bachelor degree was from the China Agricultural University where he specialized in heat energy and power engineering. During his time there, he also patented a testing instrument for hydraulic machinery. He has studied and worked in Beijing, Nice, Newcastle and Copenhagen.
Read more from Yuanchao Xu →
« previous
Green Clouds One Day