To save water resources China started to collect water resource fees in 1988. This government non-tax income is specifically used for water conservation. However, there are some problems regarding the fee. According to, Zili Cai, head of the Department of Property and Behaviour Taxation of the State Administration of Taxation these problems include the lack of people’s awareness of paying fees and the lack of mandatory collection measures among others.  He added that it’s necessary for the government to strengthen their control over water use through water taxation.

Recently, China launched a comprehensive reform on “resource fees to resource taxes”, with Hebei as the pilot province. On 9 May 2016, the ‘Interim Measures for the Pilot Reform of Water Resource Tax‘ (“Water Tax Interim Measures”) for Hebei province was issued by the Ministry of Finance (MoF), the State Administration of Taxation (SAT) and the Ministry of Water Resources (MWR). This is to replace the water resource fee system in place. The Water Tax Interim Measures is in force since 1 July 2016. Here are some points of note:

What is the difference between fees and taxes in China?

According to the explanation from the SAT, there are three main differences between fees and taxes:

From the above table we can see that fees and taxes are managed by different government bodies. It appears that taxes are standardised nationwide and are more flexible than fees. So why was Hebei province selected for the pilot?

According to an interview of experts in China Financial and Economic News, Hebei province was likely selected due to its water scarcity levels and industrial structure. 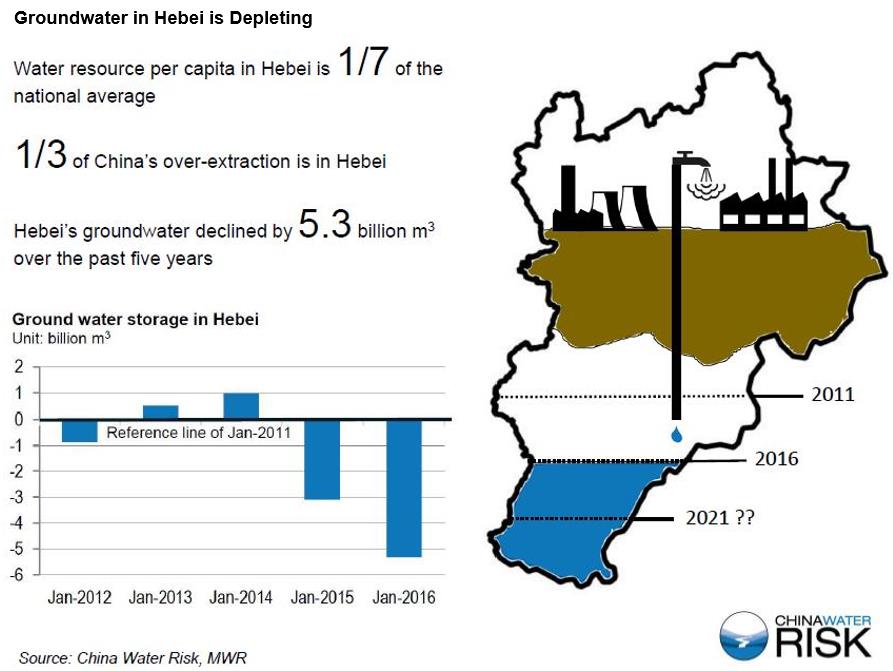 The government is trying to change this situation with the water resource tax.

The above regulations and the Water Tax Interim Measures have the following similarities:

And now for the main differences:

So what does the Water Tax Interim Measures mean?

The SAT says the normal industrial and domestic water use cost will remain the same as before. However, we can still gage some potential changes from the Water Tax Interim Measures.

Specific rates are still missing at the moment but the increased range for water resource tax rate indicates that companies in groundwater over-extracted and severely over-extracted regions could face costs.

High tax rates have a positive impact on water conservation

The Netherlands was the first country to start collecting water resource taxes, including a surface water pollution tax in 1970 and a groundwater tax in 1981. According to Chinese researchers1, with the introduction of the surface water pollution tax in the Netherlands, pollutant discharge decreased greatly. Most of the companies taking part in the research said their reduction was due to this tax. As for the Netherlands’ groundwater tax (EUR0.1785/m3), after its introduction both industrial and domestic water use decreased. Thus the researchers concluded that the tax effectively contributed to groundwater conservation.

Denmark has one of the highest water tax rates globally (EUR0.7/m3). About 99% of drinking water in Denmark come from groundwater. As part of the tax reform in 1994, water resource tax was enacted to secure water resources and avoid over-extraction. The tax has lowered domestic water use.2

As one of China’s most water-scarce provinces, Hebei is leading the way for the country’s new water resource tax, a stricter and more comprehensive measure. Although differences between the old fees and new taxes are not great at the moment, there are positive signals towards a stricter enforcement. On top of groundwater depletion, Hebei is also facing pollution which threatens groundwater. According to Chinese experts, 91% of Hebei province is located in the most polluted river basin in China, the Haihe Basin. With more specific measures and tax rates still to come, the water resource tax may be a solution for the groundwater woes in Hebei.

Author: Yuanchao Xu
Yuanchao uses his analytical proficiencies towards the assessment and visualization of water risks for China Water Risk. Prior to joining, Yuanchao was based in Europe completing the Erasmus Mundus Master Program where he specialsed in hydro-informatics and water management. He applied his skills in climate forecasting and water resource modelling to the EUPORIAS project with DHI (Danish Hydraulic Institute) which resulted in a conference paper on seasonal climate forecasting. Building on this work, he went on to develop hyfo, an open-source R programme for climate scientists and modellers to analyse and visualize data. Yuanchao’s bachelor degree was from the China Agricultural University where he specialized in heat energy and power engineering. During his time there, he also patented a testing instrument for hydraulic machinery. He has studied and worked in Beijing, Nice, Newcastle and Copenhagen.
Read more from Yuanchao Xu →
« previous
China’s Soil Ten