A green Covid-19 recovery is key. CWR's Xu deciphers the mixed signals on coal in China & shows why it stills need coal

Covid-19 has brought huge shocks to the already sagging global economy. Various countries have announced stimulus packages to tackle the downturn economy and high unemployment numbers but a big question here is what about green development? While some packages have mentioned green conditions it is still yet to be seen really how much of the world’s rebuilding and development will be green, especially how much of China’s given its global impact.

China’s 2020 coal consumption est. to be down to 3.8bn tonnes, better than target…

…yet there are mixed signals

Energy, coal are high on the agenda for green packages. China has set an ambitious goal towards ecological civilisation in its 13FYP for energy, targeting to control its coal consumption within 4.1bn tonnes and within 58% of the total energy consumption. It is estimated that in 2020, the last year of the 13FYP, China’s coal consumption will be 3.8bn tonnes, even outperforming the target.

However, there are mixed signals and questions on coal’s future in China, which we look at below.

China Dialogue has recently expressed concerns over the potential signal that China is going to have more coal in future, as China has downgraded the risk level in many regions according to the latest risk alert for coal power projects.

NEA downgraded risk level for coal projects across many regions

See less red in maps below

The risk alert is released yearly by the National Energy Agency (NEA) showing risks of coal power investments. It is also considered as a restraint on coal power projects, as that no new power projects will be approved if a region is marked with “high risk”. The risk level shown above is the overall risk, which includes three aspects: overcapacity risk, environmental risk and profitability risk. Although the overall risk seems to be downgraded, it is not the case for environmental risk. As presented below, for 2019-2021, 8 provinces are marked as red, while for 2022-2023, a more detailed city level restraint is given including over 80 cities from 10 provinces. Many cities in coal provinces such as Shanxi, Shaanxi and Shandong are still restricted for coal projects given their environmental capacity. Moreover, there are still many other restraints for regions even marked as green in the “traffic light system”.

Relaxing restraints could be to help expand power transmission…

The geographical mismatch of renewables and power consumption has long been an issue for China, resulting in large curtailment of renewables as well as heavy pollution in developed regions. Ultra-High Voltage (UHV) power transmission projects are considered as a solution, for the sake of both increasing utilisation of renewables and alleviate environmental pressure.

China has now built 20 UHV channels and become one of the most advanced countries in UHV. In the Central Economic Work Conference in 2018, UHV power transmission projects are included in the “new infrastructure” together with 5G, big data, AI, etc. According to Mao Weiming, Chairman of the State Grid, the confirmed investment for UHV projects in 2020 has reached RMB112.8bn. 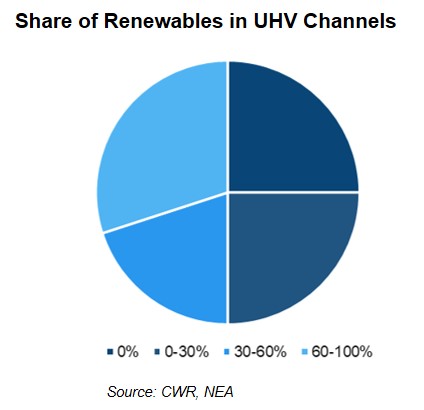 Comparatively, some renewables (e.g., wind/solar energy) have intermittent outputs thus stable sources, such as coal power, need to be bundled in the power transmission. As of 2019,  the share of renewables in the 20 existing UHV channels varies from 0-100% though on average is 52.4% (see chart on the right), out of which 6 UHV channels are 100% renewables. In May 2020, China just completed construction of a new UHV channel with an investment of USD3.17bn, which is also the first ever UHV channel designed particularly for renewables.

As Ye Chun, an energy expert, commented, renewables might be the main force in power transmission in future, but for now, coal power is still the principal source.

The loosening of restraints on coal does not mean a stall in China’s green development. Instead, the strict environmental requirements on newly built coal power capacities can promote the cleaner use of coal. Not to mention that most of the plans are for the power transmission and better utilisation of renewables. According to Bloomberg, China has invested USD904.3bn in renewable energy from 2004 to 2019, even larger than the global investment in power sector in 2018. Despite this, the issue is really how to take better advantage of existing capacities rather than building more.

…but green development still the focus of the 14FYP

Ecological targets have already been embedded in China’s millennium plan; they are nothing new. As outlined by Huang Runqiu, the Minister of Ecology and Environment, China is still facing severe environmental issues including heavy chemicals-based industrial structure and coal-based energy mix but ecological protection/green development is still the focus in the 14th FYP. Actually, the ‘General Plan for Key Projects on the Protection and Rehabilitation of Key National Ecological Systems (2021-2035)‘ recently published by NDRC and MNR has already set the scene for the next decade. In the foreseeable future, we can still expect more effort put in this field by China.

Author: Yuanchao Xu
Yuanchao uses his analytical proficiencies towards the assessment and visualization of water risks for China Water Risk. Prior to joining, Yuanchao was based in Europe completing the Erasmus Mundus Master Program where he specialsed in hydro-informatics and water management. He applied his skills in climate forecasting and water resource modelling to the EUPORIAS project with DHI (Danish Hydraulic Institute) which resulted in a conference paper on seasonal climate forecasting. Building on this work, he went on to develop hyfo, an open-source R programme for climate scientists and modellers to analyse and visualize data. Yuanchao’s bachelor degree was from the China Agricultural University where he specialized in heat energy and power engineering. During his time there, he also patented a testing instrument for hydraulic machinery. He has studied and worked in Beijing, Nice, Newcastle and Copenhagen.
Read more from Yuanchao Xu →
« previous
2019 State Of Ecology & Environment Report Review