China Nuclear: The Future is Unclear China has set plans for 58GW of nuclear by 2020 & possibly as much as 500GW by 2050 (though not clear)
Expansion plans raise water contamination fears especially with move to inland locations near the Yangtze River
Renewables could serve as alternative to inland nuclear but raise water risks; best to reduce electricity demand

Below is a teaser on the nuclear power chapter from the report. As of today, nuclear power is growing nowhere faster than in China. Indeed, China has ambitious nuclear expansion plans, with 58GW officially targeted in 2020 and some forecasts even anticipating 500GW in 2050. The underlying motivations of such an expansion are clear: feeding the growing hunger for power while reducing the reliance on coal and its air pollution. The carbon friendliness of nuclear power is another attractive feature. However, experts (see here and here) highlighted that inland nuclear is at crossroads due to water scarcity and contamination fears.

In the chapter on nuclear power in our report “TOWARDS A WATER & ENERGY SECURE CHINA – Tough choices ahead in power expansion with limited water resources” (referred to as “the report”) we explore other options such as energy savings and further development of renewables should be fully exploited before initiating such inland expansion of nuclear power. Chinese nuclear expansion plans, water related concerns and alternative scenarios are also detailed. Below are some of the key findings of our report.

No official target beyond 2020 signals future of nuclear is unclear

As of today, there is no official target beyond the the State Council’s objective to reach 58GW of operational capacity and 30GW under construction in 2020. In the longer term, nuclear installed capacity forecasts indicate 200GW in 2030 and range from 340GW to 500GW in 2050, representing from 19% to 28% of electricity consumed by then. 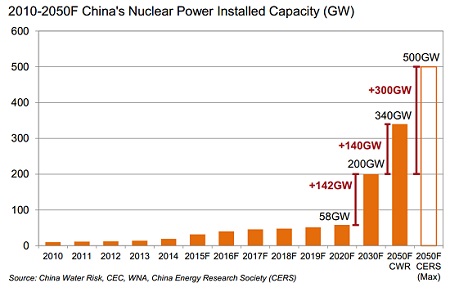 Concerns over water availability and water contamination may dampen China’s ambitious nuclear expansion plans. Nuclear power plants (NPPs) require a constant supply of water to cool down the reactor even after the power plant has been shut down. If not properly managed, the absence of such cooling capacity might result in reactor damage and the leakage of radioactive material.

Another concern is that nuclear power is thirstier than coal and gas. For a same amount of electricity generated, NPPs usually require significantly more water for cooling purposes than coal-fired power plants.

For these reasons, at the time of writing, only coastal NPPs have been constructed as they can use seawater for cooling and limit the risk of freshwater contamination. However, there are already some plans to move inland.

Nuclear expansion is about to move inland, with +28GW planned and +40GW proposed

Already 11 inland NPPs are in the pipeline, representing a total capacity of 28GW. While thre is more detail in our report, nine are located in the Yangtze river basin (see map below), raising significant water concerns. As per our report, the Yangtze River is relatively water rich. However, thre are other factors that should be considered:

On top of these 28GW of planned inland NPPs, already 40GW of inland NPPs have been proposed, further intensifying the concerns. Given that construction of these NPPs in the Yangtze River Basin is yet to start, we urge extreme caution while proceeding with such plans. Potential electricity generated from inland nuclear expansion should be seriously weighed against other alternatives.

In our report we explored several alternatives scenarios for the 28GW of already planned NPPs. We only considered renewables since replacing nuclear with coal or gas-fired power defeats the initial purposes (cleaner air & lower carbon emissions).

Our analysis shows the 28GW of inland nuclear power plant could be replaced by:
60GW of hydropower,
or 106GW of wind,
or 161GW of solar PV capacity Our results show that 28GW of nuclear power plant could be replaced by 60GW of hydropower, 106GW of wind, or 161GW of solar PV capacity.

These values are substantial for sure and might prove daunting. Yet, according to aggressive scenarios of renewables’ development, discussed in the report, this might not be too far-fetched. In the same report, we also analysed how much renewables would be required to avoid inland NPPs in case China was to reach 340GW of nuclear power installed capacity in 2050.

Other considerations remain, starting with the intermittent nature of renewables requiring additional thermal power for smoothing. Renewables also come with hidden water risks, like the water pollution caused by rare earth mining or the rise of geopolitical tensions due to the damming of transboundary rivers (see report chapters on hydropower and )other renewables.

However, this is just to replace 28GW of planned inland NPPS, let alone the base case scenario of 340GW and even more aggressive 500GW scenario. So what does nuclear’s future look like?

Nuclear power stands at a crossroad

Our analysis show altogether, the operating, planned and proposed NPPs have a total capacity of 192GW, just shy of the 200GW anticipated in 2030 by the NEA. However, when excluding inland NPPs, these only reach 124GW. For this reason, and given the lack of space on coastal areas, it is hard to conceive that China can reach these targets without inland expansion of nuclear power. This is even more unlikely when considering the 2050 aggressive forecast of 500GW.

The closest thing to a silver bullet to avoid the development of inland NPPs would be the reduction of electricity demand which, as discussed in analysis could be achieved both through energy efficiency improvements and the rebalancing of industrial mix towards less energy-intensive industries. But as our analysis shows the scale of energy savings needed it vast. More on China’s pursuit of energy savings here.

China therefore stands at a crossroad. No inland NPP has so far been built and there are no official targets beyond 2020. But if China is to follow ambitious nuclear expansion plans, it will have no choice but to move inland.

Given safety and water concerns, surely other alternatives such as renewables and energy savings should be seriously considered before making this move.

Nevertheless, as we warn in our report, “if inland expansion was to proceed, particular attention should be paid to the first inland NPPs, for two main reasons:

To access the detailed nuclear power analysis and that for other power types in the report click here. Author: China Water Risk
We believe regardless of whether we care for the environment that water risks affect us all – as investors, businesses and individuals. Water risks are fundamental to future decision making and growth patterns in global economies. Water scarcity has emerged as a critical sustainability issue for China's economy and since water powers the economy, we aim to highlight these risks inherent in each sector. In addition, we write about current trends in the global water industry, analyze changes occurring both regionally and globally, as well as providing explanations on the new technologies that are revolutionizing this industry.
Read more from China Water Risk →
« previous
Sustainable China: 8 Behavioural Guidelines