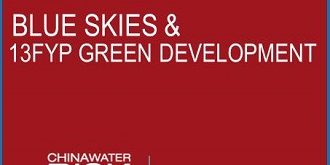 While 'blue skies' were the focus at China's Two Sessions, water & soil are no less important. See our review The environment is a frequent topic of Chinese leaders these days. This year on March 5th, Premier Li Keqiang advanced the “war on pollution” he declared in 2014 by declaring a new “battle” to “make the skies blue again”. Luckily for the delegates of the “Two Sessions”(两会, lianghui) – the National Peoples’ Commission (NPC) and the Chinese People’s Political Consultative Conference (CPPCC) –  they enjoyed bright sunshine and blue skies during the two-week of conferences.

In this year’s annual government work report, environmental protection is again placed as a top priority of the central government along with issues like employment, financial security and people’s livelihood. “Deepen institutional reform to build a sound ecological environment” is highlighted as one of the top priorities of 2017. Moreover, Premier Li Keqiang urged to “save the bottom line of environmental protection”.

Premier Li Keqiang spoke to delivering “qualified results”, inferring satisfactory results, to the people, and according to his Work Report this will include ecological environment information, as well as other aspects of life.


If 2016 is an example for qualified answers on the ecological environment we can expect answers on energy intensity per unit of GDP emissions reductions, key pollutant emission reductions, etc.  In fact, 2016 was quite a “green” year; the energy intensity per unit of GDP dropped 5%, sulfur dioxide and nitrogen oxide emissions dropped 5.6% & 4% respectively, the annual average concentration of PM2.5 in 74 key cities dropped 9.1%, coal consumption percentage dropped 2%, and the renewable energy percentage increased 1.7%.
As for 2017 (the second year of the 13th Five Year Plan), further targets have been set:

While looking ahead make sure you are also up to date on of China’s key water policies over the last year with our review and check out our notice on its 2017 No.1 Document.

Winning the battle of “blue skies”

Premier Li’s promise to make the skies blue again was the major environmental note at the Two Sessions. In order to achieve this China needs to continue to adjust domestic coal use, which as the targets above show it is doing.

Premier Li: the energy sector is essential to winning the battle of safeguarding blue skies

However, China also needs to adjust its renewable energy development. According to a Greenpeace report, China wasted enough wind energy in 2014-2016 to power Beijing for a year and came with an environmental & health bill of more than RMB8.4 billion.

Indeed, Premier Li said the energy sector is essential to the winning the battle of safeguarding blue skies. The political will is real and strong.

While “making our skies blue again” is the focus of much attention, water and soil are no less important

This focus on air pollution isn’t that surprising as after all, the Chinese people see it, breathe it and smell it. Moreover, there has been growing information about the health consequences of polluted air. However, while water and soil pollution may not be as visible as air pollution their severity and the associated health consequences are no less important. Moreover, our economies run on water and we all depend on soil for food production.

According to the 13FYP on Water Conservation Reform and Development, the target is to increase tap water access rate in rural area to 80% by 2020. Yet, no specific target was set on the ratio of water quality meeting national drinking water standard, not in the 13FYP or Li Keqiang’s annual work report.

Ecological environment restoration of the Yangtze River Economic Belt was highlighted as one of the key projects of “building a sustainable green wall”. In a press conference during the Two Sessions, Minister Chen Jining from the Ministry of Environmental Protection (MEP) said an ecological redline had been draw to protect key ecological functional zones in the belt. After Xi Jinping’s guidance on “placing ecological environment as a priority”, new projects in the belt will have to face much stringent environmental entry threshold. According to Chen, in 2016 alone, up to RMB 22 billion of investment in the belt failed to pass environmental approval. Already the MEP is setting up a market access negative list of which environmental criteria are key  – as we said in 2016, China is no longer tolerant for any “monkey business”.

On the soil front, China will launch a new detailed survey on soil pollution this year. Much has changed since the last national soil quality survey in 2006. Will the new results show that more than 16.1% of soil polluted? How will China secure its red line on arable land with 19.4% agricultural land being contaminated from heavy metal and POPs? Hopefully the new survey will provide some honest answers on whether China is on the right track in tackling soil pollution. For more on China’s action on soil, see our Soil Ten article.

‘Made in China 2025 Action Plan‘ was one another of the most popular topics during the two-week conferences, according to the Renmin Public Opinion Monitoring and Research Institution. China’s transition into a world manufacturing power (as guided by the Action Plan) and its push to a circular economy is creating a new development path for China, one that does not prioritise growth over pollution.

China’s transition to a manufacturing power is heavily reliant on raw materials, including strategic and critical minerals such as rare earths, tungsten and graphite. This could become an issue as we showed in our Rare Earth Report, where China may struggle to feed its domestic need for these materials by as soon as 2020. Rare earths and other critical raw materials are crucial to many of the higher-value manufacturing industries that ‘Made In China 20025’ pushes. In other words, the transition can’t be achieved without a sustainable supply of rare earths and other critical minerals. See which other critical materials are dug-up in China here.

The Chinese government is aware of the situation and has implemented a series of policies and regulations since the 13FYP to secure its domestic supply. In a recent national storage bid in January 2017, the State Reserve Bureau purchased over 2,000 tonnes of rare earth oxides from the major Chinese rare earth groups. This plus the newly established ‘Resource Exploitation Red Line’, ‘The National Strategic Mineral Resources Category,’ ‘National Planned Mining Area’, ‘Key Mining Areas of Important Value to National Economics’ and a new wave of crackdowns on the black market and illegal mining, signal China’s increasing control over the situation. The global market would do well to take note.

We are happy to see that environmental issues are key topics of the central government and hope that by the time the 13FYP targets are being assessed in 2018, China is winning the battle on blue skies and smoothly transitioning to world manufacturing power.

Author: Hongqiao Liu
Hongqiao Liu is a Chinese journalist and policy expert who covers China, climate, energy, environment and everything in between. She currently writes for Carbon Brief, an award-winning specialist website focused on explaining climate science and policy. Hongqiao believes in the power of journalism in fostering informed discussion, decision-making and actions on tackling climate change -- the biggest challenge of our century. Her journalism brings facts, nuance and context to heated discussions about China and provides digestible information on complex policy issues. Her early career as an investigative journalist at Southern Metropolis Daily and Caixin - two of the most prestigious Chinese media - saw her publish a series of influential exposés on social, environmental and governance challenges arising from China’s emergence. Many of her work have triggered public debate, helped foster accountability and sparked critical reform of several national environmental policies in China. She also works as an independent consultant, mostly with international non-profit organisations, advising on strategic planning and policy research. Her clients include some of the most influential advocators for the public good. Hongqiao worked with China Water Risk between 2014 and 2017 as principal researcher.
Read more from Hongqiao Liu →
« previous
Key Water Policies 2016 – 2017

Next »
Wastewater: Good To The Last Drop
Related Posts
8 Pollutants In The Ocean That Can Kill You
4 Ways To Get To Zero Chemical Pollution In The Ocean
2021 State of Ecology & Environment Report Review
SIWW 2022 – 3 Key Takeaways
Water Leaders Summit 2022 – Key Takeaways
Key Takeaways From Futureproofing Cities To Avoid Atlantis
The Latest anay