Assets at Risk due to Short-term Climate Risk Assessments 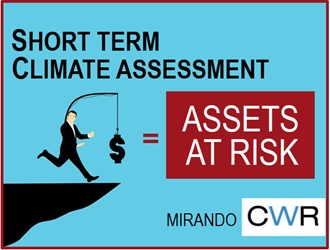 Hong Kong has a lot to lose from chronic risks of sea level rise & typhoons like Mangkhut - 70% of its commercial activity & 27% of population is clustered in low-lying land
43% of New World Development's HK properties would be impacted with an unlucky Typhoon Mangkhut yet, NWD's assessment says there will be 'only minor impacts'
To make climate risk assessments more realistic & helpful, they should be long-term and dig into the details instead of using IPCC headline numbers

Everyone is talking about climate change these days – but is there much actually being done about it? Sadly, after COP26 last year, it’s clear that not all governments are acting.

But there are quite a few organisations, including ourselves, trying to get the financial sector and corporates to move because it makes sense – the risks from climate change are going to be much higher compared to continuing down our current carbon-intensive path.

So there are more companies carrying out climate risk assessments because if you don’t know what you’re up against, how can you plan to make sure you not only survive but also thrive?

The current focus is on the risks from the carbon transition and also extreme weather events (aka acute risks). Chronic long terms risks, whether from sea level rise or biodiversity loss are starting to be discussed, but as I mentioned to AsianInvestor, “there is still less focus on them” but “These slow-brewing risks will be devastating if we don’t act.”

With sea level rise (SLR), the IPCC AR6 warned under its worst-case scenario that 2-3m of SLR cannot be ruled out by 2100. But what will this impact?

The short answer is a lot. Let me use Hong Kong to explain why – as we highlighted in our Hong Kong factsheets a few months ago, with tides Hong Kong could be looking at areas below 5m being permanently submerged in the next 80 years. Hong Kong might be hilly, but 70% of commercial activity and 27% of the population are clustered in low-lying reclaimed land; so there’s a lot to lose. We still don’t know what the plan is to protect them!

IPCC says typhoons like Mangkhut could occur every year by 2050

And Hong Kong is highly prone to typhoons, which makes the risks very imminent. We were lucky when Typhoon Mangkhut hit Hong Kong in 2018, but if instead we were hit with an “Unlucky Mangkhut” that came at high tide and hit directly it could have brought 5-7m storm tides – at 6m, 22% of Hong Kong’s population as well as 10% of land along with the airport, port and CBD would be flooded. The likelihood of this happening is only increasing because by 2050 the IPCC says an event like Mangkhut could occur every year.

New World Development (NWD) has done a lot in terms of sustainability and has won many accolades for its work. We commend the organisation for this. They have also started to carry out climate risk assessments, which we are happy to see.

But we disagree with their conclusion. The latest Sustainability Report (2020) states the following: “Only minor impacts related to flood risk are observed in the long-run for properties in Hong Kong that are located close to the coastline (i.e. susceptible to sea-level rise). This is predominantly due to Hong Kong’s robust drainage network and sufficiently high seawalls.”

Our assessment shows a very different result. The impacts of an Unlucky Mangkhut on NWD’s properties around Victoria Harbour are shown in the map below. Don’t forget, this is something that could have already happened and could hit Hong Kong annually by 2050. I see lots of flooded buildings, but according to NWD’s assessment there will be “only minor impacts related to flood risk”.

Unlucky Mangkhut would impact 43% of NWD’s properties in HK

Our analysis shows that an Unlucky Mangkhut would actually impact 43% of its properties in Hong Kong, which includes important buildings such as the Grand Hyatt, Hyatt Regency, K11 TST, Artus and Musea, and the Hong Kong Convention and Exhibition Centre. This increases to 73% for an Unlucky Mangkhut by 2100. But by that point 35% of its properties would be permanently submerged anyway.

Why are the results so different?

We’d like to see NWD and other corporates carry out more climate risk assessments, but they need to be realistic to be helpful both for their own planning and also for investors and other stakeholders. I think there are two major issues here:

We don’t want the stats and info above to dishearten NWD or any other corporate from carrying out climate risk assessments – quite the contrary. We want to see more of them, but we also want them to be realistic, so we hope our tips above can be used for the next iteration.

This way the risk assessment can be used by NWD to better plan for its own properties but also work with other corporates that are in a similar situation as collective action will be necessary. Plus, these organisations will need to support the government to ensure more is done to protect Hong Kong’s vulnerable coastline – if not, the entire economy will be at risk.

Atlantic Meridional Overturning Circulation that would severely disrupt global weather patterns. Time is ticking and it’s only a matter of time until low-lying coastal cities are submerged by rising seas unless we fast-track decarbonisation and step-up adaptation.

Author: Dharisha Mirando
Dharisha Mirando hails from the finance industry and joined CWR as she believes that climate and water factors are downplayed by the sector despite being significant investment risks. To tackle this, her ambition is to help build consensus, bridge the gap between finance and science, and engage with investors to incorporate these risks into their due diligence and portfolio management. This could in turn lead to innovative Green Finance instruments becoming more prevalent. She has already made strong headway as the lead author of a recently published report with Manulife Asset Management and the Asia Investor Group on Climate change, which highlights the imminent threats to Asian asset owners' portfolios from climate and water risks. Dharisha has also undertaken a number of speaking engagements on these pressing issues at investor and insurance conferences. Prior to joining CWR, Dharisha worked for a long-only public equities fund. She has also worked in the impact investment space in London and Singapore where she provided technical assistance to social enterprises, helped them raise equity investments, and managed a debt portfolio.
Read more from Dharisha Mirando →
« previous
On Thin Ice! 5 Hot Trends for Rising Seas