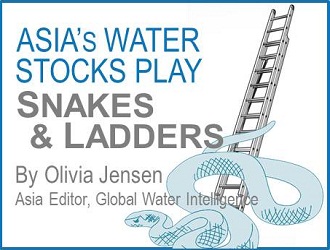 Quoted Asian water stocks regained ground in 2012 rising by 8.4%, despite a disastrous 2011
Interest in Chinese water stocks listed in Singapore has faded, turning to HK instead but IPO pipeline is on ice
KKR & United Envirotech could signal private equity interest in place of sliding public equity interest

Asian listed water stocks regained their composure somewhat in 2012, with the Global Water Intelligence Asia water portfolio rising by 8.4% over the year – a far cry from the precipitous 23% drop witnessed in 2011. This compares to a 15.9% rise in the global water index over the same period, but it outshines the 8.4% growth in the Europe and Middle Eastern regional index.

No sooner had we entered the new lunar year than Asian water stocks took off. The index jumped 12% in February, the biggest single-month rise since 2009, compared to a 4.6% rise for the global index. This was mostly thanks to massive gains for Tianjin Capital Environmental Protection (up by 64% in the month) and Beijing Capital (up by 48%). Both companies announced that they were not aware of the reasons for the sudden rally making it difficult to say how long it might be sustained. However, it is the kind of jump that might get analysts talking about the sector again.

Looking back to 2012, it was a superb year for Thailand’s two listed water companies, Eastern Water Resources and Thai Tap. Both companies’ share prices reached an all-time high earlier this month – THB12.90 for East Water and THB9.65 for Thai Tap. This is welcome news for Japanese trading house Mitsui, which holds 26% of Thai Tap’s shares, although the company appears to have no intention of taking profits.

The business outlook for both companies continues to be good. East Water is enjoying demand growth under both its bulk supply and tap water supply contracts on the eastern seaboard, and is achieving record gross margins above 60%, thanks to a decline in raw water costs. In order to meet this new demand, the company is boosting the capacity of its Tubma reservoir from 32 million m3 to 55 million m3 by 2015.

Thai Tap is also enjoying strong demand, especially in the industrial estates it serves around Bangkok, and is also benefitting from a steady rise in its inflation-linked tariffs. It is adding to existing capacity with a new industrial estate water supply project, expected to come online during 2013.

However, analysts reckon both stocks are coming to the end of their bull run. Siam Tiyanont at Phillip Securities in Bangkok rates Thai Tap’s shares ‘reduce’ with a target price of THB8.25. In December, the announcement that the stock would be included in the Bangkok exchange’s SET 50 benchmark index, stoked more investor enthusiasm, taking the price beyond that justified by fundamentals alone.

Kawee Manitsupavong at Asia Plus Securities, meanwhile, puts a fair value of THB12.50 on East Water, implying that the price has overshot and will settle down again as we move on into 2013.

Regional champions VA Tech Wabag and Manila Water have seen their stock prices pumped up over the course of the year by strong expansion at home and abroad. Can it go on? Vineet Agrawal, analyst at SKP gives Indian EPC Wabag a sky-high valuation of INR 710 by March 2014 based on its potential to win desalination projects. Other analysts are not that optimistic but do concur on a ‘buy’ rating.

Manila Water has taken important steps in the last year to position itself as the leading concession company in south-east Asia. Most daringly, it bought up Suez’s stake in the Jakarta west concession, shrugging off competition from the Japanese trading houses and others. Yet more than 90% of the company’s earnings still come from the Manila east concession so analysts’ focus is on the timing and size of tariff adjustments. Laura Dy-Liacco, analyst at Maybank ATR, gives the company a ‘hold’ recommendation with a target price of PHP33.70, up from 30.40, but she points to a lower inflation-linked adjustment in 2013 compared to 2012 and a possible delay in implementation as dampening factors.

Little ripples in a big pond

Over the course of the past few years, there has been a shake-out in the Singapore-listed water companies operating in China. Sinomem, Asia Environment Holdings and Hyflux Water Trust dropped out of the GWI Index. The stocks that remain look stronger than they have done in years, yet investors seem to have lost their enthusiasm for the sector. Local analysts report that interest in the remaining stocks has faded, dissipated by the financial difficulties of the small cap, low liquidity Chinese names. Some analysts are even dropping their coverage of Hyflux, the anchor of Singapore water stocks. Those who still want exposure to the water story are looking instead to Hong Kong.

Private equity interest has replaced public equity to some extent. Growth at United Envirotech, for example, has been boosted by two rounds of financing from private equity house KKR. After subscribing to a US$114 million convertible bond in November 2011, KKR announced its intention to inject US$40 million of straight equity into the company in January. KKR remains convinced that United Envirotech is the company best placed to exploit opportunities in the Chinese wastewater market. “We screened the wastewater market very carefully prior to investing, and United Envirotech really stood out because of its track record and leading position in MBR,” Lane Zhao, a director with KKR China, said. With the financial backing of KKR and plenty of wastewater treatment plant owners in China looking to divest, the company’s growth streak looks set to continue.

Asia Water Technology, meanwhile, was renamed SIIC Environment and upgraded to the main board of the Singapore stock exchange at the end of last year. The new name makes the company’s ultimate parentage rather more obvious, but not necessarily more attractive, to potential investors – AWT is majority-owned by Shanghai Industrial Holdings, itself a subsidiary of Shanghai Industrial Investment (Holding) Co., the Hong Kong window company of the municipality of Shanghai.

SIHL demonstrated its parental generosity with the injection of water assets into SIIC Environment at the end of 2011, effectively doubling its project capacity from 1 million m3/d to 2 million m3/d. This is now feeding through into SIIC Environment’s results. If there is a cloud hanging over the stock, it is the fact that SIIC Environment is part of a complex web of investments in the water sector involving Shanghai Industrial, making it difficult for investors to gain a clear picture of the firm’s strategy. SIHL is also a co-owner of General Water, which is both larger and better connected politically than SIIC Environment. So far, SIHL is keeping its eggs in several baskets but if the water sector in China starts to consolidate, it may decide to bet on General Water rather than SIIC Environment.

Things are also looking up for HanKore, which is being courted by a number of suitors interested in its BOT portfolio. This marks a dramatic turnaround from the Bio-Treat days, but probably also means another shift from public equity to private equity in the coming year.

With no sector buzz surrounding it, Hyflux’s raw performance is more exposed. The company announced in January that it had signed a take-or-pay agreement for its $600 million desalination project in Dahej India for 100% of planned plant capacity and announced a solid set of results in February but this news has failed to tickle investors.

PPWSA, the Phnom Penh water utility, which staged its IPO in mid-2012 is a big ripple in a tiny pond. As the only security on Cambodia’s infant stock exchange, there was huge interest and a flurry of trading at the time of the listing but investors have nowhere else to go creating a totally illiquid market. There is only so much that a solid dividend-generating stock can do to develop a country’s financial market.

Hopefully 2013 will bring Ranhill Utilities – a power and water play – back to the Malaysian stock exchange and back into the GWI index. SIIC Environment may also move ahead with a second listing in Hong Kong, while Sino-French Holdings, the joint venture between Suez Environnement and NWS Holdings, could also make an appearance on the HK exchange.

The environment for mainland Chinese IPOs, on the other hand, is distinctly icy. Like the 900 other companies putting themselves forward to list in Shanghai or Shenzhen, wastewater construction and operation company Anhui Guozhen Environmental saw its application review grind to a halt in the second half of 2012, as all of China focused on the leadership handover. The new administration has not brought good tidings for IPO candidates in China, however. According to news reports, China’s securities regulator has required all underwriters and auditors of applicants for domestic IPOs to review their financial statements. The regulator will then conduct its own checks on a sample of companies. Investors hoping for a greater investable universe of Chinese water stocks could be in for a long wait.

Author: China Water Risk
We believe regardless of whether we care for the environment that water risks affect us all – as investors, businesses and individuals. Water risks are fundamental to future decision making and growth patterns in global economies. Water scarcity has emerged as a critical sustainability issue for China's economy and since water powers the economy, we aim to highlight these risks inherent in each sector. In addition, we write about current trends in the global water industry, analyze changes occurring both regionally and globally, as well as providing explanations on the new technologies that are revolutionizing this industry.
Read more from China Water Risk →
« previous
Water Water Everywhere; Only If You Share