Is the fish we eat really from the ocean? How polluting is fish farming? CWR's Chan explores these & more We are eating more fish & almost half of it is farmed; between 1980 & 2015, aquaculture production rose >16x
With 62% of global production & 14% of global export value, China is the top producer & exporter of farmed fish
But aquaculture can be polluting & low prices could fuel hyper-consumption; is it time to check our diet habits?

It’s Christmas time again! Just before the festive cheer kicks in it’s a good time to reflect on where the feast on our plates, be it turkey, steak or even chocolate, comes from. As more and more of our fish is being farmed instead of caught in the wild, the environmental impacts of aquaculture deserve more attention. Sure, farming fish can reduce pressure on wild fisheries, but is it sustainable? We look at five fishy facts below: 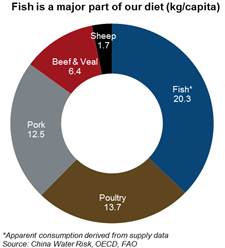 Fish is a ubiquitous food source and has been part of humanity’s diet for millennia. Demand is growing as well: from 1980 to 2015, per capita food fish supply almost doubled from 11.7kg to 20.3kg (see adjacent chart). This is more than the combined amount of beef, veal and poultry an average person consumes per year.
This rising demand for fish has, however, put tremendous strain on wild fisheries. According to WWF’s Living Blue Planet Report (2015), local and commercial fish populations declined by 50% between 1970 and 2012.
That’s where aquaculture comes in. Instead of capturing fish and other commercial marine species from the open ocean, aquaculture raises them in captivity in coastal areas, rivers and even indoors.

2. Nearly half the fish we eat is farmed

As measures were put in place to limit overfishing, aquaculture boomed. Between 1980 and 2015, the total amount of fish production from aquaculture rose more than 16 times from 4.7mn tonnes to 76.6mn tonnes (see below chart). This means that around half of the fish we consume today is farmed rather than captured.

Between 1980 & 2015, fish production from aquaculture rose more than 16x…
… around half of the fish we consume today is farmed rather than captured So who is the biggest player in this thriving industry? The answer is China. As of 2016, China is the largest producer of aquaculture, contributing 62% of global production. In particular, China accounts for around 93% of global silver, bighead and grass carp production and 82% of eel and sturgeon production.

Other countries’ aquaculture production pale in comparison to China

Other countries’ aquaculture production pale in comparison to China. India, the second largest aquaculture producer only contributes 7% of global production. Even Japan, a country renowned for its seafood, comes in at 12th. Note that all of the Top 5 countries are from Asia, accounting for 85% of total production.
Deep-diving into China’s fisheries, it is clear that China relies on aquaculture much more than wild catch, with the former making up almost 3/4 of the country’s total fisheries production. That is not to say China doesn’t catch fish from the oceans… at 17.59mn tonnes in 2015, it is also the largest producer of wild catch. In an age where China dominates resource competition, even fish is “Made in China”. 4. China is also the top exporter

Not only does China produce a lot of fish, it has also been the top exporter since 2002. In 2004, it exported USD6.6bn worth of fish to other countries and by 2014, this amount has more than tripled to USD21bn (14% of global total). Norway, with its world-renowned salmon exports, comes second. Moreover, China’s imports of fishery products are growing, making it the world’s third-largest importing country since 2011. The increase in China’s imports is partly a result of outsourcing of processing from other countries, but it also reflects the country’s growing domestic consumption of species not produced locally.

Aquaculture is a resource intensive industry and unsustainable practices can pollute the very water fish are raised in. Excess fish feed along with fish waste are often not collected and left to compose in riverine and coastal environments, leading to eutrophication. Fish feed is even frequently doused with antibiotics to prevent disease in overstocked farms.
It’s not just fish farming that pollutes. In China, animal manure is put into artificial cultivation lakes and ponds in order to foster algae growth that is necessary to feed the filter-feeding pearl mussels.

Much is made of China’s War on Pollution: does it address aquaculture water pollution? The signs are positive. The “13FYP on the Development of National Fisheries” repeatedly emphasises the need for sustainable fish farming. In particular, it mandates the reduction of inland fisheries while encouraging offshore marine farming to minimise pollution.
Action on ground is already evident: since October 2017, 30 illegal aquaculture sites have been closed and removed from the Dongting Lake area in Hunan Province, a key region for freshwater crab and fish production.

6. How much water does it take to grow a fish?

Unlike catching fish from the oceans, which only indirectly use a small amount of water through transportation, aquaculture can have a much higher water footprint. This may seem counter-intuitive, but raising fish can actually consume a large amount of freshwater through pond evaporation, dilution needs and fish feed production.
A study focusing on China uses the Water Footprint Network (WFN) approach and estimates the water footprint of aquaculture in freshwater and brackish environments to be 3,349-21,215m3/tonne and 2,204-57,125m3/tonne respectively. This includes both direct and indirect uses from feed production to evaporation to dilution needs (only for inland brackish environments). While the lower ranges are not alarming, the higher ranges outstrip even beef, lamb and chocolate’s water footprints. Putting this into more tangible terms, that is up to 220 bathtubs of water for just 1kg of fish!

The higher ranges of aquaculture’s water footprint may outstrip those of beef, lamb & chocolate… Of course, this research field is still nascent plus water footprints vary greatly depending on provinces, species and farming practices; so estimates must be taken with a grain of salt. Regardless, with groundwater extraction for fish farms in China’s Yellow River Delta causing subsidence, the sustainability of aquaculture has to move under the spotlight.

“年年有餘/鱼” is a traditional Chinese saying which puns on the Chinese word for fish (鱼) to indicate abundance and prosperity. As China becomes more prosperous, fish consumption and demand will likely rise.
The World Bank has projected in their 2013 report “Fish to 2030: Prospects for Fisheries and Aquaculture” that under a scenario of “accelerated consumer preference shift” in China, global aquaculture production will reach 116.2mn tonnes, as opposed to a baseline projection of 93.6mn tonnes, by 2030. Essentially, burgeoning Chinese diets could double the pace of future global aquaculture growth. 8. The exponential growth of fishy business – does it make sense?

So China dominates the fisheries market – and as the below graph shows, the RMB1.1tn industry is likely to keep booming. But does it really make sense? As we have shown, raising fish can have severe impacts to China’s water resources. Even if China is willing to pollute to provide “fish forever more” to its own people, can we expect China to keep exporting fish at its environment’s expense? We have already seen crackdowns on polluting fish farms and the 13FYP emphasises sustainable aquaculture. What’s more, China’s fisheries industry has not been particularly profitable in the last 20 years. As the below graph shows, the indexed price for China’s aquatic products has not experienced any sustained increases since 1996, even suffering a decline from 2011-2015. Changing diets and low prices may fuel out-of-control consumption… can “fish forever more” and prosperity really go on?

… will this fuel further consumption We as a society are entering an age of hyper-consumption – from fish to fashion to Moutai; and the impacts on water can be huge. Thankfully, for aquaculture, sustainable innovations are aplenty. Seafood Trade Intelligence Portal (STIP), Solidaridad and Fresh Studio have recently hosted an “Aquaculture Innovation Challenge”, which has spawned ideas including insect protein as fish feed and wind-powered aeration. Elsewhere, vertical fish farms and recirculating systems could also lead the sector down a greener path.

Is tech the way forward? Or should we be wary of our consumption habits?

But is tech really the way forward? Or does it merely offer temporary hope? As we produce more fish and other commodities, it is only a matter of time before over-consumption outweighs the efficiency and sustainability gains from technology. Surely it makes more long-term sense  to be wary of our own consumption habits?

Author: Woody Chan
Woody Chan leads corporate social responsibility and sustainability initiatives at foodpanda, strengthening its commitment to grow sustainably with its ecosystem of riders, merchants, and consumers. As an advocate for environmental sustainability, Woody has also participated in various speaking engagements, from TEDx talks and university seminars to industry forums and panels.
Read more from Woody Chan →
« previous
Moutai: Risks Along The Intoxicating River

Next »
5 Facts On Crop Failures Due To Water Risks
Related Posts
SIWW 2022 – 3 Key Takeaways
Water Leaders Summit 2022 – Key Takeaways
Key Takeaways From Futureproofing Cities To Avoid Atlantis
IPCC AR6: High Hopes For Oil & The US + China & The Rest Of Us
IPCC AR6 WG2: 8 Dire Impact Facts You Must Know
Adapt or Die: 8 Things You Must Know for An Effective Resilience Roadmap
The Latest anay