8 Things You Should Know: Rice & Water

China is the #1 global producer of rice. Here are 8 things you should know about rice & water Rice as a dominant food staple can be traced back to as long as 4,000 years ago and today it still feeds more than half of the world’s population. The fact that to “eat rice” is an equivalent to consume a meal in many Asian cultures highlights its importance.
Here are 8 things you should know about rice & water in China:

1. China is the #1 rice producer globally 2. China farmland dedicated to rice = size of Italy; 52% of these lands are in water scarce & stressed provinces Rice is clearly a key staple in China. Other key grains grown are wheat and corn (see graph). In 2012, China produced around 151kg of rice and corn per capita compared to 89kg of wheat per capita.
This rice output came from around 30 million hectares of sown land which is equivalent to the size of Italy. Analysis of rice sown land and the availability of water resources show that 13% of these lands lie in the Dry 11 and 39% in the At Risk 9. In other words, 52% of China’s farmland dedicated to rice lie in water scarce & water stressed provinces. Rice is obviously water intensive (images of rice paddy fields spring to mind) but just how much water does rice need?

3. Rice = thirsty grain; but swapping to more wheat/corn might not work

Rice is the most water intensive key grain (see graph below). The global average virtual water content is 2,300 litres in 1kg of rice. Perhaps we should switch out of rice into other grains? However, as highlighted in HSBC’s No Water, No Food Report, less thirsty grains such as corn and wheat are even more exposed to water scarcity than rice with 84% of China’s corn sown land and 87% of China’s wheat sown land in water scarce and water stressed regions (see HSBC graph). At least the good news is that China appears to be more “water-efficient” in producing rice, only using 1,321 litres per kilo of rice compared to the world average (according to Arjen Y Hoekstra & Ashok K Chapagam). Also, China is turning towards agritech to boost rice yields per drop of water used (see later).

4. Pollution from excessive fertiliser use: Top 5 Rice Producers with 51% of China’s rice output use 9 million tonnes of fertiliser less than the total fertiliser use of the USA

Compounding China’s water scarcity issue is water and soil pollution. Agriculture is the most polluting industry through its excessive use of chemical fertilisers and pesticide. This is a vicious cycle as pollution exacerbates already limited water resources and degrades soil quality resulting in the withdrawal of land for farm use. Already around 3.33 million hectares of farmland is too polluted to grow crops and has been withdrawn from use last year (more on the state of China’s agriculture here). Fertiliser has been used to boost yields. For rice, the Top 5 Rice Producing Provinces are Hunan, Heilongjiang, Jiangxi, Jiangsu & Hubei. Together, they accounted for around 51% of total national rice output in 2012. However, a total of 13 million tonnes of chemical fertiliser was used in agriculture in the Top 5 Rice Producing Provinces (see table).
While there is no detailed breakdown of which crops these fertilisers were applied to, the fact that the amount used in these 5 provinces is only 9 million tonnes less than the 2011 total US fertiliser use should give an idea of the extent of liberal fertiliser application.

5. “Cadmium Rice” and exposure to industrial pollution: 51% of China’s rice produced in provinces which account for 60% of national cadmium discharge

Not only is rice exposed to nonpoint source pollution from excessive fertiliser use, it is also exposed to industrial wastewater pollution (more on heavy metals discharge in China here). According to the HSBC No Water, No Food Report, “Three-fifths of China’s sown area is exposed to 85% of the nation’s heavy metal discharge – with rice the most exposed grain and Hunan the most exposed province”.
Indeed, over half of China’s rice output is grown in provinces which account for a significant share of the total national heavy metals discharged in wastewater: Lead (51%), Mercury (55%), Cadmium (60%), Chromium (31%) and Arsenic (56%).

HSBC No Water, No Food 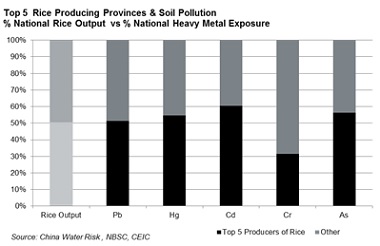 Rice samples with alarming levels of cadmium found caused much concern amongst the Chinese public. A Chinese Academy of Science, Nanjing Agricultural University Study in 2007 estimated that 10% of rice sampled had excessive levels of cadmium from soil pollution. Hunan and Jiangxi were amongst the provinces highlighted. This is not surprising as Hunan is the #1 ranked province across all five heavy metal categories with the exception of chromium where Henan comes up top. Hunan is the #1 rice producing province with 13% of national rice production.
On weibo, there have been almost half million posts specifically related to cadmium rice. The posts expressed deep concern about heavy metals in rice and worries over farmers saying that they would not eat their own rice.

Read a first-hand account of cadmium rice & cancer villages in our interview with award-winning photographer Lu Guang here. Lu Guang’s photographs have been instrumental in drawing attention to this issue.
With rising food safety concerns, central government is turning their attention towards tackling agricultural and soil pollution (more here). But soil remediation takes time … so in the meantime, where can China get more “safe” rice? Given that Thailand’s rice production is close to maximum capacity, can other rice growing countries support China’s rice appetite? Or is the way forward a change in diet?

A diet mix comparison amongst the G20 countries shows that Asian diets are more rice intensive than western diets (see graph). Amongst the Asian countries, Indonesians have the largest daily per capita calorie intake from rice at 48%, whilst the Chinese derive 26% of their daily calories from rice. It is clear from the graph that the Chinese are the top meat eaters amongst the Asians. However, meat is more water intensive and in February 2014, State Council issued the New Guidelines on China’s Food & Nutrition Development 2014-2020 advocating a change in diet to increase grain mix to >50% and fats <30%, and 78g of proteins (more on this here).
Given concerns over “cadmium rice” and limited possibility of switching to wheat and corn due to their high exposure to water scarcity, China may have no choice but to turn to imports to support it “more-grain-less-meat” diet. HSBC thinks so … read their opinion here.

China can turn to rice imports make up for deficits in domestic production but the amount that it may be able to import may be limited. Also, food security is of paramount importance and as China wants to maintain 95% grain self-sufficiency, it is looking towards agritech to provide solutions. Ultimately, to ensure rice security, China needs to develop a climate change adaptation strategy.

China is already one of the more efficient rice growers and achieves more than 7 tonnes of rice per hectare while India and Thailand average only around 3 tonnes per hectare.

China is already one of the more efficient rice growers and achieves more than 7 tonnes of rice per hectare while India and Thailand average only around 3 tonnes per hectare. Also, water use in rice is relatively efficient (see point #3); as such, China is turning towards hybrid seeds that produce more crop-per-drop. Hybrids are also being developed as part of climate change adaption. Extreme weather is becoming more common in China – it needs to sow extreme weather resistant rice strains that are able to withstand flooding, droughts as well as hybrids that can withstand both floods & droughts within a single planting season. In 2012, hybrid rice accounted for 55.4 – 59.7% of China’s total rice sown area.
The International Rice Research Institute (IRRI) is testing to combine climate change tolerant breeds of rice such as: “Salinas” that grow on saline seawater, “Sahod Ulan” for rain-fed farms and the flood-resistant “Submarino”. IRRI is also conducting research on pesticides that are able to minimize damage to rice crops by the destructive brown planthopper (a rice crop pest prevalent in Asia).

Such hybrids should also help to reduce the use of pesticides plus reduce the effect of the shift in Pacific Decadal Oscillation ocean cycle, which is expected to make Northern China wetter and the South drier (more on this in our review “Food, Weather & Water Heading North”). This may be good news for the thirsty North but given that the majority of rice is grown in the South, rice production is likely to be affected.

Although this march towards agritech is encouraging, there is still a long way to go. Xu Yinlong (a member of the Scientific Steering Committee leading the UNEP’s Programme of Research on Climate Change Vulnerability, Impacts and Adaptation) in his interview with China Dialogue says that there is still no clear understanding of what adaptation to climate change is in China. Xu believes that adaptation planning is required at national level across ministries and sectors before any coordinated action in order to be effective.
Let’s hope we get there – we like our rice!

Author: Katie Tsang
Katie creates editorial content in China Water Risk’s social media platforms to raise awareness on China’s water issues, as well as manages and analyzes trends and statistics arising from these platforms. She is also responsible for translating China Water Risk’s interactive slides “Big Picture” into Chinese. Previously she lived in Canada for six years, and the nature loving country made her realize that we can all do our parts to make the planet a better and more sustainable place to live.
Read more from Katie Tsang →

Author: Dawn McGregor
Dawn leads CWR’s work to help corporates navigate increasingly disruptive & material risks from water & climate threats, as well as transitional risks in the supply chain arising from new regulations in China. Here, Dawn engages extensively with the global fashion industry delivering on-ground workshops in China to keynotes and strategic input at European HQs. She has written at length on the end of dirty and thirsty fast fashion and her report to overcome gaps between brands and manufacturers for a clean and circular future inspired the industry to create a new wastewater tool. Dawn also works closely with the property and tourism sectors where she not only conducts strategic assessments of their exposure but builds collective action toward resilience via closed door working groups and invite-only events. Having helped build CWR, Dawn is a frequent keynote, panellist & moderator at events, including being twice selected as the lead-rapporteur at World Water Week. Her articles are cited in various industry publications including the UN’s ‘World Without Water’. Dawn previously worked in a global investment bank assessing geo-political risk, crisis management and business resiliency. She was born and bred in Hong Kong and has lived in France, England, Singapore and Beijing.
Read more from Dawn McGregor →
« previous
Global Agriculture & Water Scarcity