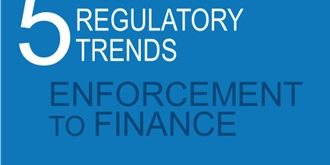 5 Regulatory Trends: From Enforcement To Finance To achieve the target of a “Beautiful China”, the Chinese government has over the last year issued a series of regulations and standards, such as, the ‘Environmental Protection Tax’ (-released on 25 December 2016, to be enforced on 1 January 2018) and the ‘Measures for Soil Environment Management for Polluted Land (Consultation Paper)’ (-released on 31 December 2016). Such regulations can affect businesses through higher cost of compliance, enforced shutdowns, tax increases and fines.

China’s regulatory landscape is shifting…
…concern is growing among investors

Concern for regulatory risks is also growing. The Industrial and Commercial Bank of China (ICBC) is conducting stress testing focused on the potential risk caused by regulations. In a survey conducted by CWR in 2016, based on water risk valuation research, regulatory risk was found to be the risk of most concern by investors. And in the stress testing workshop held in the People’s Bank of China (PBoC) on 12 January 2017, regulatory risk was discussed and analysed by different institutions including ICBC and CWR.
From 2016 to February 2017, China’s environmental policy landscape has undergone a series of important changes. These signal the growing focus by the government on environmental protection. These regulatory changes are important when looking at potential regulatory risks.

Enforcement is key to the successful implementation of regulations and policies. Due to different standards and provincial resistance, regulations have sometimes not been fully enforced. Promisingly, since China declared war on pollution and the ‘Water Pollution Prevention & Control Action Plan’ (“Water Ten”) (-released on 2 April 2015) came out, enforcement seems to have greatly improved.

The increase in enforcement has been backed by a series of reforms. The first, in May 2016, is the Water Resource Tax Reform that has replaced the water resource fee. Another is the Environmental Protection Tax that was approved by the Standing Committee of the People’s Congress, which replaces the previous pollutant discharge fee. Along with the change in name, the powerful tax administration will be in charge, signalling stricter enforcement.
The ‘Interim Provisions for the Administration of Pollutant Discharge Permit’ (-released on 23 December 2016) was issued by the MEP to support the Environmental Protection Tax. It provides the model and application process for the pollutant discharge permit and corresponding supervision measures.

Additionally, there are new criminal scenarios for environmental violations. The Two Supremes (Supreme People’s Court, Supreme People’s Procuratorate) provided interpretations on issues concerning environmental pollution crimes (-released on 27 December 2016). They categorise 18 scenarios as “severely polluting the environment” and 14 scenarios as “resulting in severe consequences”, as well as corresponding criminal penalties. The ‘Measures for the Connection of Environmental Protection Administrative Enforcement and the Criminal Enforcement’ (-released on 25 January 2017) provides guidance on: criminal case transfer from environmental protection administrations to public security organs, collaboration scheme among environmental protection administrations, public security organs & people’s procuratorate and information sharing.
On top of the legislative reform, a series of supervision measures were also published to further assist enforcement, such as, ‘Assessment Measures for Evaluating Objectives of the Ecological Civilization Construction’ (-released on 22 December 2016) and the ‘13th Five Year Plan (13FYP) on Assessment and Review of the Implementation of the Strictest Management System for Water Resources’ (-released on 27 December 2016). A lack of clarity is no longer an excuse.

A ‘River Chief’ mechanism was released in Dec 2016

The ‘Opinions on Fully Promoting River Chief Mechanism’ (-released on 11 December 2016) was issued by the general office of CPC Central Committee and the general office of the State Council. River chiefs are to be designated in four administrative levels: province, city, town and village. River chiefs will be responsible for water resources management and conservation in corresponding rivers and lakes, as well as the coordination between different administrations for trans-boundary lakes/rivers. River chiefs conferences and information sharing scheme will be established to report the management and protection of rivers and lakes.

Transparency and disclosure of environmental information are key to environmental risk analysis and public supervision. However, current disclosure in China still has issues, including the lack of detailed and relevant information, as well as sometimes even fabricated data. This situation is expected to improve as transparent information platforms are required by different new regulations and plans. In the ‘Interim Provisions for the Administration of Pollutant Discharge Permit’, companies are required to provide relevant information on the pollutant discharge permit management platform. In the ‘13FYP Work Plan on Energy Saving & Pollution Reduction’ (-released on 5 January 2017) and the ‘13FYP on the Construction of Water Saving Society’ (-released on 17 January 2017), companies on blacklists will be published on the national information platform.

Fabricating and falsifying data or disrupting monitoring equipment are no longer just administrative violations. In the Two Supremes’ interpretation mentioned before, those acts can be considered as both a crime that “pollute the environment” and a crime that “destroy information systems”. Incidents like the Volkswagen’s emission scandal are likely to be considered as a crime in China in the future.
Complete and accurate disclosure can also be a useful resource for business. In the ‘13FYP on Development of National Strategic Emerging Industries’ (-released on 29 November 2016), environmental protection equipment/service trading and bidding platforms are encouraged, which can take advantage of the pollution data disclosure in different sectors. In the ‘13FYP on Water Conservation Reform and Development’ (-released on 27 December 2016), water conservation technology sharing platforms are also encouraged, which can bring more opportunities.

As environmental protection plays a more important role in the government’s plan, more subsidies are expected in the future. In the ‘13FYP Work Plan on Energy Saving & Pollution Reduction’, it is suggested that a special fund should be provided for pollution reduction projects and corresponding promotions, and tax benefits should be provided to  enterprises actively reducing pollution.
In the ‘13FYP on the Water Conservation Reform and Development’, subsidies for agricultural water conservation are to be provided. In ‘13FYP on the Construction of Water Saving Society’, water saving facilities are applicable for subsidies. In ‘13FYP on the Construction of Urban Wastewater treatment and Recycling Facilities’ (-released on 31 December 2016), water treatment and recycling facilities which are not open to capital markets can apply for policy and financial support for construction and operation.

The pollutant discharge permit will likely be a popular commodity

In the ‘Guiding Opinions on Establishing a Green Finance System’ (released on 31 August 2016), a green finance system was first initiated. After that, different financial institutions have moved on green finance, including the Bank of China (BOC), which issued a green bond of USD3 billion in July 2016, breaking the record of international green bond issuance. In the ‘13FYP Work Plan on Energy Saving & Pollution Reduction’: banks are encouraged to provide different kinds of financial support to key pollution reduction projects, financial institutions are encouraged to perfect the green credit scheme, mandatory insurance is suggested in fields with high environmental risk and private capital should establish a fund for energy saving investments.
Stronger enforcement indicates a higher regulatory risk for companies, while better transparency and disclosure provide a basis for more accurate analysis. New projects also provide different opportunities for the participation of financial institutions. More interactions between the environment and finance  can be expected.
Recently issued regulations are listed below:

Author: Yuanchao Xu
Yuanchao uses his analytical proficiencies towards the assessment and visualization of water risks for China Water Risk. Prior to joining, Yuanchao was based in Europe completing the Erasmus Mundus Master Program where he specialsed in hydro-informatics and water management. He applied his skills in climate forecasting and water resource modelling to the EUPORIAS project with DHI (Danish Hydraulic Institute) which resulted in a conference paper on seasonal climate forecasting. Building on this work, he went on to develop hyfo, an open-source R programme for climate scientists and modellers to analyse and visualize data. Yuanchao’s bachelor degree was from the China Agricultural University where he specialized in heat energy and power engineering. During his time there, he also patented a testing instrument for hydraulic machinery. He has studied and worked in Beijing, Nice, Newcastle and Copenhagen.
Read more from Yuanchao Xu →
« previous
Dug-Up In China: The World’s Critical Raw Materials

Next »
5 Trends For 2017: The Year Of The Rooster
Related Posts
Hong Kong Rising Seas Adaptation Is Way Behind New York & Singapore
Triple Whammy Hit for HK’s Poor; the Rich can Escape Rising Seas
Hangry & Submerged – A New Vision for HK Food Security
8 Pollutants In The Ocean That Can Kill You
4 Ways To Get To Zero Chemical Pollution In The Ocean
2021 State of Ecology & Environment Report Review
The Latest anay