We review mixed trends for China's water in 2017 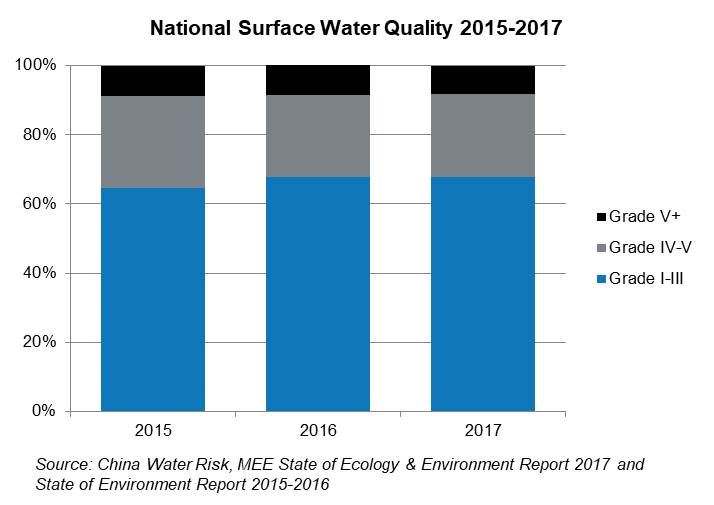 The report cites 2017 as “a crucial year for China in implementing the 13FYP for Ecological & Environmental Protection”, reporting that “‘good quality’ surface water has continuously improved nationally”.

Indeed, it shows Grade I-III national surface water rising to 67.9% and Grade V+ dropping to 8.3%. As seen from the right chart, it is a marked improvement from 2015 when China first started disclosing it.

However, it’s not all positive.  A closer look shows that the overall quality of Key Lakes & Reservoirs as well as groundwater has deteriorated. The key results from the 2017 report are as follows:

Prioritising rivers appears to have paid off

It is not surprising that rivers are doing better; they have been the government’s focus in recent years. In 2016, China more than doubled the river surface monitoring stations to 1,617 and in 2017 plus river chiefs were introduced as part of the war on pollution. Clearer divisions of responsibility and better coordination among the river chiefs, as well as increased public monitoring appear to be working.

Enforcement has also stepped up. According to the report, the number of environmental violations has increased in the past year:

Although this was not mentioned the 2017 SOEE report, it is worth noting that the total cases of seizures, administrative detention, criminal charges, production halts and daily fines also increased 74% from 22,730 in 2016 to 39,600 in 2017.

A more realistic view of groundwater and Key Lakes & Reservoirs?

Although the report provides no explanation of the recent deterioration in groundwater or Key Lakes & Reservoirs, we did say in “5 Trends for the Year of the Dog” that “as watchdogs become more powerful, environmental disclosure will be on the rise and become increasingly accurate.” Perhaps similar to the revision of fake and over-inflated GDP figures across various cities, counties and provinces earlier this year, the latest MEE numbers may well reflect the “real” state of environment.

Nevertheless, looking forward, we expect to see not only improvement in surface water quality, but other water bodies too (albeit slower for groundwater as this is harder to tackle). This is because the Water Ten Law is now effective as of 1 January 2018. Moreover, more than 900,000 river chiefs are appointed as of December 2017; this is more than quadruple the 200,000 as of August 2017. There is also a new environmental tax law and water resource tax expansion – read more on these here.

We can also expect the newly established MEE to show “more teeth” and take on more responsibility in implementing holistic action to protect the environment. That said, we clearly have far to go on all fronts. Below are detailed accounts of the 2017 SOEE report …

Overall groundwater quality – continues to deteriorate, 2016 is just a blip …

Despite this, the proportion of “very bad” quality groundwater of 14.8% still meets the Water Ten Plan’s target limit of 15% by 2020. As mentioned previously, perhaps these numbers now likely reflect the ‘true state’ of groundwater problems.

Meanwhile, on a more positive note, the overall shallow groundwater quality of China’s main river basins has shown continuous improvement as discussed previously. However, individually, they indicate mixed performance. The charts below show the breakdown of the differences in water quality across the main river basins disclosed in the SOE/SOEE report between 2016 and 2017.

As per charts above, 4 river basins show a decline in “good or excellent” shallow groundwater quality from previous years: Yangtze (-5,7%), Liao (-1.8%), Songhua (-1.7%), and Huai (-0.7%). On the other hand, Inland Rivers shows a material improvement in the proportion of “good or excellent” quality by 13%, which topped other river basins at 39.1%. Following this, Yellow and Hai show a +1.3% and +0.3 improvement in the same category respectively.

All main river basins have improved in the “very bad” category Although being the river with the most Grade V+ water…

…it is the first time Hai river reversed the trend of “more good water; but also more really bad water” since 2012 Author: China Water Risk
We believe regardless of whether we care for the environment that water risks affect us all – as investors, businesses and individuals. Water risks are fundamental to future decision making and growth patterns in global economies. Water scarcity has emerged as a critical sustainability issue for China's economy and since water powers the economy, we aim to highlight these risks inherent in each sector. In addition, we write about current trends in the global water industry, analyze changes occurring both regionally and globally, as well as providing explanations on the new technologies that are revolutionizing this industry.
Read more from China Water Risk →
« previous
5 Trends For China Green Finance

Next »
New Tech & Policy For Climate Resilience: 3 Takeaways
Related Posts
IPCC AR6: High Hopes For Oil & The US + China & The Rest Of Us
IPCC AR6 WG2: 8 Dire Impact Facts You Must Know
Adapt or Die: 8 Things You Must Know for An Effective Resilience Roadmap
IPCC AR6 WG2 Demands We Build A Climate Resilient Northern Metropolis
First-ever 14FYP for Water Security – 8 Key Thoughts
5 Trends for 2022: The Year Of The Tiger
The Latest anay