The glaciers of the “Yangtze River Source Region” (YRSR) are in the “most sensitive area to global warming” atop the Tibetan Plateau, according to a study led by the Institute of Tibetan Plateau Research. Nearly a quarter of the glacier coverage throughout the headwater region of the Yangtze melted from 1970 through the late 2000s, as the Institute of Geographic Sciences and Natural Resources Research found.

China’s glaciers key in determining river runoff; but up to 67% may disappear by end of the century

Across China “glaciers will play a key role in determining river runoff” in the future, research led by Peking University has stated. However, they projected that the nation’s glaciers will “suffer substantial reductions,” with over a quarter of glaciated regions potentially wasting by 2050. By the end of the century, in the worst case scenario, as much as 67% of China’s glacier volume may completely “disappear.” The nation already faces crippling water crises. As of 2012, two-thirds of China’s 669 cities endured shortages and more than 40% of waterways were “severely polluted”. More than 140 million Chinese urbanites have been affected by thousands of water contamination issues which blight the nation’s cities each year. Additionally, 80% of its lakes were plagued by eutrophication, and 300 million rural citizens had limited access to safe drinking water. In 2016, China’s Ministry of Water Resources announced that 80% of shallow groundwater across the mainland — including the Yangtze, Yellow, Huai and Hai catchments — was “unsafe for human contact”.

To address these issues, China has implemented ambitious water schemes, designed to store and reroute billions of gallons of water from “China’s Water Tower,” the Tibetan Plateau, to thirsty northern provinces. The ‘South-North Water Diversion Project’ and the Three Gorges Dam are two of the best known (and most controversial) projects deployed to address China’s unfolding water crisis. Asia’s longest river — the Yangtze — sustains over 584 million people, and serves an economic zone which represents nearly 42% of China’s GDP (US$4.18 trillion), according to China Water Risk. The operations within the catchment provide 40% of the nation’s electricity and 73% of its hydropower. The fortunes of China have been built upon the banks of the Yangtze.

Climate change is having a dramatic effect on the freshwater stores in the Yangtze’s headwater region. In 2007, the State Key Laboratory of Cryospheric Sciences (SKLC) determined that between the 1970s and 1990s the local rate of warming more than doubled, from 0.5°C per decade to 1.1°C per decade. According to China’s Cold and Arid Regions Environmental and Engineering Research Institute (CAREERI), between 1961–2000 glacier melt contributions averaged 11% of the total runoff feeding the Yangtze — over 1.13 billion m3. By 2013, research initiated by the State Key Laboratory of Hydrology-Water Resources and Hydraulic Engineering (Hydro-Lab) indicated that glacier melt now only contributes 5-7% of the Yangtze’s annual flow.

Climate change having a dramatic effect… Yangtze runoff from glacier melt declined from 11% in 1961-2000 to 5-7% in 2013
Business as usual would see 4°C rise in region by 2070; catastrophic for glaciers & downstream operations Chuancheng Zhao of Lanzhou University, and his colleagues, predicted that temperatures in the YRSR will have increased 3°C by the end of the 21st Century. This would result in temperatures 5.1°C above those observed in the 1970s. This pessimistic projection was exceeded by Steve Birkinshaw of Newcastle University and his team in 2016. Their models predicted that if business continues as usual, the region could face a temperature increase of “more than 4°C” by 2070 (compared with pre-2010 conditions).

This would be catastrophic for the Yangtze’s glaciers, with severe consequences for all downstream inhabitants and operations.

Li Xin of CAREERI forecasts that across China “glacier runoff will increase continuously from 2000 to 2030,” but will begin to decline after reaching ‘peak water’ around 2030.

Shen Yongping and his colleagues project that, if temperatures rise 3°C by 2100 as Zhao suggests, “glaciers less than 4km in length in the YRSR would disappear entirely, resulting in a decrease of 60% or more in the total area of glacier cover in the region.”
During periods of reduced runoff – when less rainfall is available – glacier melt has remained a staple source of water for the Yangtze. Runoff oscillates as part of the natural cycle, and glacier melt has proportionally increased. However, as glaciers continue to disappear, the river is losing this once-reliable source.. In the 1990s, total runoff (from all sources) into the Yangtze declined 13.9%, according to the SKLC. During this period, 17% of the Yangtze’s waters were sourced from glaciers, as glacier melt contributions increased over 15%.

Most of the 753 YRSR glaciers are in the Tanggula Mountains

There are 753 glaciers in the YRSR, identified through the Chinese Glacier Inventory. The greatest concentrations are located in the Tanggula Mountain Range, which delineates over 600 km of the Qinghai-Tibetan border.

Changes in the Tanggula Mountains

Combined, Tanggula’s glaciers span an area roughly the size of the Hong Kong SAR — over 1,020km2. The westernmost glaciers surround a 6,621m peak named Geladaindong. Six of the largest glaciers, each expanding over 30km2, radiate outwards from the mountain. 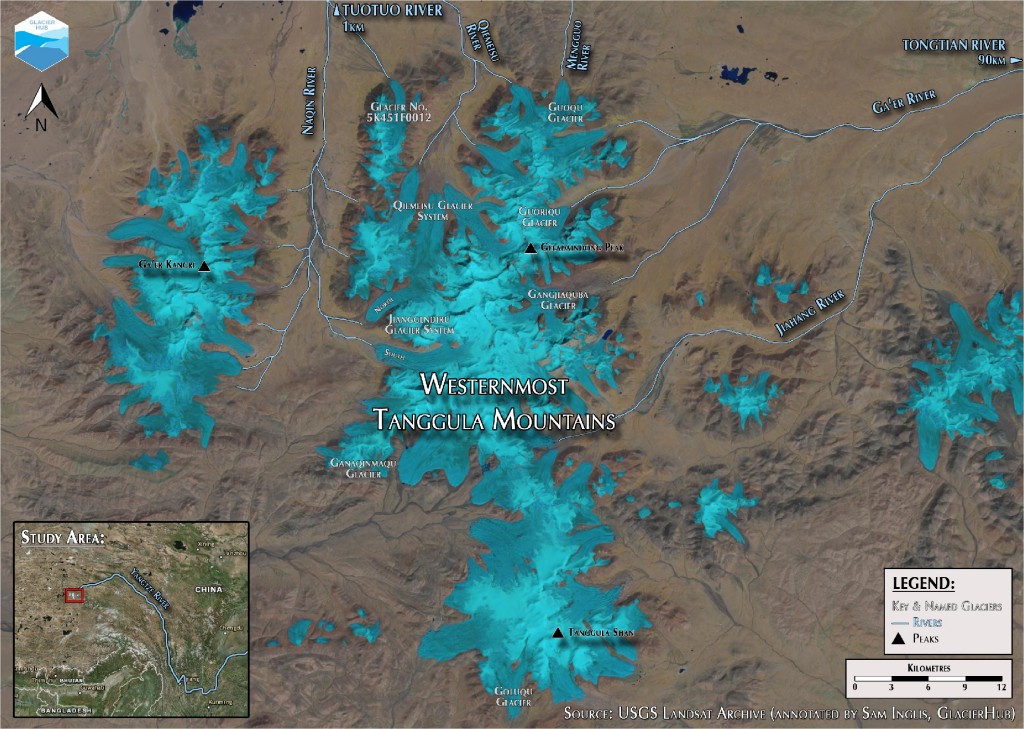 The “most important glacier in the region” is Jianggendiru, the symbolic source of the Yangtze discovered in 1976. Gao Shengyi of the Changjiang Spatial Information Technology Engineering Company accorded the glacier this title in a 2014 study. It is comprised of two ice streams, the north and south, which have been in decline for at least 32 years at an annual rate of 15m and 21m respectively. Despite Gao’s et al. insistence for focus on Jianggendiru, the most catastrophic change has taken place at Gangjiaquba Glacier. Gangjiaquba flows east, and is a source glacier of the Tongtian River, via the Ga’er River.
Seventy percent of the glaciers in the YRSR (a store of 88.7 billion m3 of freshwater) feed  into the Tongtian. They contribute 1.13 billion m3 of meltwater each year — 9% of the the runoff into the river. Sixty percent of water in the uppermost Yangtze flows through the Tongtian. A comparison of satellite images from June 1973 (middle of the melt season) and February 2016 (post-winter maximum extent) reveal that the snout of the glacier retreated up to 4.2km. Inferences from trimlines (‘tidemarks’ indicating the glacier’s former extent) on the valley sides, cross-referenced with Landsat satellite imagery, indicate that parts of the Gangjiaquba Glacier thinned up to 57m over 43 years. Gao and his colleagues calculated Gangjiaquba retreated 100m per year, on average. Within the Tanggula Mountain Range, CAREERI project glacial melt will increase up to 30% over the coming 34 years (compared to 1961–2000 average). More than 10% of the region’s ice will likely disappear, reducing its areal extent by 118.5km2 — twice the size of Manhattan.

Short-term glacier melt good for hydropower & thirsty industries; but only until “tipping point” in 2030

In the short term, increased glacier melt will be a boon for hydropower, drought-stricken agricultural lands and towns, thirsty industries, and the like. However, the post-2030 “tipping point” brought about by ‘peak water,’ coinciding with peak population, has even propagandistic mouthpieces, like China Daily, sounding the alarm.

Note: An ever-present barrier to research of remote regions of the Third Pole, is the inconsistency of nomenclature (naming). For instance, Gangjiaquba Glacier, which feeds the Tongtian River in the east, is referred to as “Retreating glacier R2” in a 2006 study led by the Institute of Tibetan Plateau Research, has appeared on regional maps as “Shuijingkuang,” and appears elsewhere in Mandarin — “岗加曲巴冰川.” It appears as “RGI40-13.18831,” with the ‘name’ “CN5K444B0065” in the Randolph Glacier Inventory. It is denoted as “5K444B0064” in China’s Glacier Inventory. And it appears as “G091171E33460N” in the Global Land Ice Measurements from Space (GLIMS) database.
*A version of this article originally appeared on GlacierHub WATER-NOMICS OF THE YANGTZE RIVER ECONOMIC BELT: Strategies & recommendations for green development along the river” – Jointly released by China Water Risk (CWR) and the Foreign Economic Cooperation Office of the Ministry of Environmental Protection of the People’s Republic of China (MEP FECO) , this brief explores the linkages between water use and allocation, as well as pollution control and economic development in the Yangtze River Economic Belt (YREB). This collaboration expands on China Water Risk’s earlier work on trade-offs within the water-food-energy-climate nexus.

Author: Sam Inglis
Sam Inglis is a glacial hazards specialist based in Asia. He holds an MSc in Climate Change & Risk Management from the University of Exeter, UK, and has worked on glacial hazards, mountain environments, and transboundary water resources since 2012. His own research has focused on the impacts of glacier melt, glacial lakes, and outburst flooding on hydropower in the North Patagonian Icefield of Chile, and the Indo-Tibetan catchment of the Sutlej River. Sam is also a member of Yale University's Program on Climate Change Communication social media team, is a researcher with DC-based Mountain Institute, and regularly contributes to the glaciological website ‘GlacierHub' - an initiative from Columbia University's Earth Institute. Through his work he strives to increase awareness and understanding around the world’s rapidly disappearing glaciers, and the broader impacts of climate on water resources.
Read more from Sam Inglis →
« previous
Future Fashion & ‘Beautiful China’ – Together Forever?