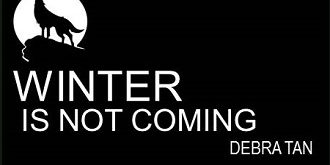 Winter is Not Coming

Game of Thrones' Ygritte might be right; Jon Snow, you know nothing. Tan says find our inner-Yoda we must China is warming faster than rest of the world: runoffs in its major rivers, glaciers, permafrost & sea ice are declining
Permafrost has retreated by almost 20% in the last three decades & glaciers in China have shrunk 10% since 2000
Skiing may be but a dream while full melt of Greenland icesheet sinks HK, Singapore, Shanghai and many more

After a month in the mountains, I am dreaming of a white Christmas but it doesn’t even feel like winter. Hong Kong is unseasonably warm. Just last week, I was running around in a tee-shirt. Global warming accompanied with a roll of the eyes is now the typical response whenever we experience extreme or unusual weather. We know it is happening yet our actions taken to address it are somewhat contradictory.

Take China for instance. The newly released The Third National Assessment Report on Climate Change which contains the views of over 500 scientists & experts from an assortment of think tanks, ministries and academia say that the “globally averaged combined land and ocean surface temperature shows a warming of 0.85°C (0.85 to 1.06°C) over the period 1880 to 2012”. However, China experienced a warming in the range of 0.9-1.5°C from 1909 to 2011. In short, China is warming up faster.
Also the updated range of 0.9-1.5°C is considerably higher than the range estimated in The Second National Assessment Report on Climate Change of 0.5-0.8°C.  With such significant shifts, it’s good to see China at the table at COP21 with an INDC (Intended Nationally Determined Contribution) commitment and making the appropriate noises on capping coal consumption and carbon emissions. Can China do more – sure, but so can the other G20 countries.

But if China is seriously committed to mitigating climate change, then why host the Winter Olympics in a location which requires making artificial snow? I think it is safe to assume here that solar powered fake snow making will not be an option in winter. So it’s likely down to coal-fired snow making – that just sounds wrong.
By the way, the 2014 Winter Olympics was held in Sochi, one of Russia’s subtropical destinations – they had to make snow there too.
At least the Beijing committee has pledged to compensate its carbon emissions by planting 70,000 hectares of trees. We assume this to on top of the existing plans to “vigorously enhance afforestation, promoting voluntary tree planting by all citizens” under the INDC commitment to increase forest stock volume by 4.5 billion m3 by 2030.
Before we start rolling our eyes at China (again), why is the International Olympic Committee (IOC) even considering such bids?

IOC host selection flawed?
Unless powered by renewables, making fake snow could make snow melt faster …
… snow is after all an essential ingredient

Surely, regardless of whether an area has water, the Winter Olympics should not be held in areas where a significant amount of artificial snow has to be created in order to host the event. This is energy and resource intensive and unless powered by renewables will have climate change implications which only serve to accelerate global warming, glacial melt, exacerbate global water scarcity, ultimately leading to less snow … an essential ingredient of the event.
OK, we can plant more trees but surely the whole point is to not be in that position in the first place? In a warmer planet, the future of the Winter Olympics is looking bleak. Perhaps it is time for the IOC to seriously factor in climate change in its host selection parameters. Is it not the IOC’s responsibility to do everything possible to keep the spirit of the winter games alive for at least another century?

The promise of declining ice and rivers

It’s not just less snow but rivers are also affected by climate change. The report states that although trends in nationally averaged annual precipitation over the past 60 years have not changed significantly, “their decadal changes and regional distribution variations are marked”. “The evaporation generally reduces across China, and runoffs in 7 major river basins have been declining”, the report states.

Exacerbating this is the warning that “the extents of large-scale glaciers, permafrost and sea ice have substantially decreased in recent decades”. From 1970 – 2006, permafrost in China has retreated by 18.6% and between 2006 and 2012 is estimated to fall a further 9.1%. Since 2000, glaciers in China have also shrunk 10.1%.
Freshwater resource, be it in the form of rain, snow, rivers or glaciers are clearly impacted by climate change. Yet, carbon emissions still hog centre stage at COP and many (naturally from the water space) lament that water is not more discussed. So this year, we are glad to see the Paris Pact on Water & Adaptation, which pulls together almost 290 water basin organisations with a “”Water Resilience Focus”.
Naturally, we were excited. But skimming over the headlines, collaborative projects and financing of the mountain watersheds of the Hindu Kush Himalayas which feed 10 major rivers that flow into 16 countries in Asia were missing. I have one word – blindspot. (More on why in “Vanishing Ice: Asia Running Dry”)

Greenland, Frosty the Snowman and the rise of our seas

Focus appears to be on deltas and coastal cities over another water problem – sea level rise.

Greenland is facing the same fate as Frosty the Snowman – it’s melting. The Greenland ice sheet is one of the fastest and largest melting chunk of ice and due to its size, a full melt would see sea level rises of around 6m.
At +6m, parts of Hong Kong, Singapore and Shanghai would be under water, as would many Pacific Islands. That should also be enough to reconsider long term property investment in Los Angeles, San Francisco and Lower Manhattan to South London or Edinburgh. Of course countless of islands in Indonesia and the Philippines will also be affected. A full melt of the Greenland ice sheet and +6m is at the extreme end but surely it is enough to motivate us to act?

It’s worth noting here that in the regional breakdown of China’s climate change report, regional warnings of impact on freshwater resources appear more frequently than impact of sea level rise.
The situation is urgent. With the increased frequency of extreme weather and climate events in China, even the Chinese have acquiesced that it “cannot rule out the influence of the enhanced GHG effect arising from human activities”.

In limbo and in denial – the “Age of Contradiction”

We seem to be stuck. We know the problem, yet we are focused on some but not everything that is important. Plus our actions are full of contradictions – conserve energy but make snow, want fashion to clean up but then want to buy cheap clothes. As George Monbiot aptly says “Consume more, conserve more: sorry, but we just can’t do both”. Something has to give – we need to decide what we are willing to “give up”.

“Consume more, conserve more: sorry, but we just can’t do both”

Another piece of China news this month was the cloning of cows. Before we get on our high horse, consider that a kilo of beef would have emitted 300kg of CO2-equivalent and sucked up over 15,000 litres of water. A cloned cow may well be more water and energy efficient than growing the cow from scratch in industrial farms – there will be no need to feed it food that has been shipped across the world or treat it’s the waste and so on.
Maybe, if we want to keep buying an endless supply of cheap clothes, upgrade our phones every 6 months and continue to ski, we have to accept petri-dish beef in the future. Or eat less meat and be vegetarian. Hopefully, we will soon wake from this “Age of Contradiction”.

Winter is not coming, find your inner-Yoda

Anyway, I am spending Christmas in Singapore – so I know my white Christmas wish will remain a dream. But in the face of warmer weather globally and “sharp warming in Siberia” which has led to “the weakening of cold waves and cold air activity in China” (according to the Chinese report), there is a chance that the white Christmas, “just like the one I used to know…” could become (shock/horror) a permanent dream. I’m sorry Game of Throne fans, Jon Snow got it wrong – winter is not coming.

“I’m sorry Game of Throne fans, Jon Snow got it wrong…
Winter is not coming.”

The future of skiing looks bleak. For those of you skiing this winter holidays – enjoy and when you return, come talk to us – we are looking to brainstorm innovative solutions – to do something different. Who knows, it may well stop your kids/grandkids from asking you/your children “why didn’t you do something when you could have”. In the meantime, you can start by consuming consciously – choose your clothing, IT & Food brands and hotels carefully this holiday, plus change it up with China Water Risk’s 8 gifts tips.
If you have found this article depressing, I apologise. It is what it is; it’s time to stop debating about who, how or why we arrived at this point. Persuading ourselves that it “will all work out” is clearly not working. I am a firm believer in our ability to innovate and re-invent – I would not be doing this job, if I didn’t. We need to adjust our focus onto the real issues at hand. Are they daunting? Absolutely. But this is the season to optimistic – so get into the Star Wars spirit and find your inner-Yoda for “rise to the challenge, we must”. Happy Holidays!

Find your inner-Yoda  for “rise to the challenge, we must” 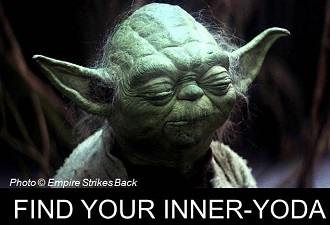 China Water Risk will review key takeaways from COP21 in full in next month’s newsletter – sign up now !

Author: Debra Tan
Debra heads the CWR team and has steered the CWR brand from idea to a leader in the water risk conversation globally. Reports she has written for and with financial institutions analyzing the impact of water risks on the Power, Mining, Agricultural and Textiles industries have been considered groundbreaking and instrumental in understanding not just China’s but future global water challenges. One of these led the fashion industry to nominate CWR as a finalist for the Global Leadership Awards in Sustainable Apparel; another is helping to build consensus toward water risk valuation. Debra is a prolific speaker on water risk delivering keynotes, participating in panel discussions at water prize seminars, numerous investor & industry conferences as well as G2G and academic forums. Before venturing into “water”, she worked in finance, spending over a decade as a chartered accountant and investment banker specializing in M&A and strategic advisory. Debra left banking to pursue her interest in photography and also ran and organized philanthropic and luxury holidays for a small but global private members travel network She has lived and worked in Beijing, HK, KL, London, New York and Singapore and spends her spare time exploring glaciers in Asia.
Read more from Debra Tan →
« previous
Vanishing Ice: Asia Running Dry