It has been 4 months since the July 23rd launch1  of “Thirsty Coal 2” report, where we profiled the coal chemical sector in China, focusing on one of the world’s largest coal-to-liquids projects (hereafter referred to as “The Project”), operated by Shenhua, and located in Ordos, Inner Mongolia, China. In that report, we highlighted the following environmental issues related to the Project.2 (Read Greenpeace’s earlier opinion here)

Since then there have been several new developments…

In July, local NGOs Friends of Nature and Nature University filed a public interest lawsuit against Shenhua’s Coal to Liquid Project over the groundwater extraction and wastewater discharge.5

This case was neither taken up by the Beijing Dongcheng District Court on August 30, 2013, nor by the Inner Mongolia Intermediate Court on September 9, due to technical reasons and deficiencies in the China’s existing civil procedures6.

On this day, Shenhua submitted the document “The Explanation of Water Resource Exploitation and its Ecological Impact”7 to Greenpeace. Data provided by Shenhua show the following8: 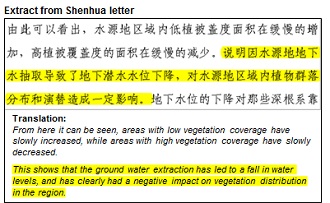 During discussions between Greenpeace and Shenhua, although there were disagreements regarding the legality of the Project’s water extraction, Shenhua acknowledged that there was a significant relationship between the Project’s water consumption and the desertification of the region. See extract and Appendix: table 1 for more details.

On this day, Shenhua submitted the document “The Explanation of Wastewater Discharge”9 to Greenpeace.

In response to the 1st case of wastewater discharge that Greenpeace highlighted in the July 23rd “Thirsty Coal 2” report, Shenhua confirmed that it had been ordered twice by local environmental officials on the 23rd April (Notice 2013[60], Yijin Horo Banner EPB) and 26th of April (Notice 2013[19], Ordos EPB), to rectify the incident’s environmental damage. In addition, Shenhua admitted that they had little experience in dealing with the waste water that comes as by product of the direct coal liquefaction process (See Appendix: Table 1 for more information).

Shenhua did not respond to the remaining two cases of wastewater discharge that Greenpeace exposed.

On this day, Shenhua publicly announced10 that it was reducing the Project’s per ton water intensity of oil production to 6 m³, compared to 10 m³, which was the estimated water intensity level in the initial design phase.11

While it did not explicitly mention that Greenpeace’s investigation had led to this decision, the key points of the Shenhua’s press release suggest that this was so. The key points were as follows:

Greenpeace cautiously views regarding these latest developments. Although it is a welcome sign that Shenhua has announced its plans to reduce it water intensity, numerous outstanding issues remain. the key question is whether the physical environment can support a large scale push into these sectors. Greenpeace’s assessment … suggest that it cannot

Ultimately, the push by coal companies to move into high value added products such as synthetic oil and gas, is to diversify revenue streams in an environment of softer coal prices, which make direct coal sales less profitable.

However, the key question is whether the physical environment can support a large scale push into these sectors. Greenpeace’s assessment, looking at the Shenhua Coal to Oil Project, and considering analysis21 by other experts, suggests that it cannot. 1https://scmp.com/news/china/article/1289422/greenpeace-report-accuses-shenhua-group-drastic-groundwater-drop
2 For more details, see Appendix: Image 1
3 Approximately 346.2mm/year
4 At the time of report launch, it was unclear how far groundwater levels had fallen. Field investigations revealed that numerous wells less than 30 meters had gone dry, and that new wells had to be dug to 100 meters to access water supplies.
5 https://news.youth.cn/gn/201310/t20131024_4079356.htm
6 According to Beijing District Court, although Article 55 of Civil Procedure Law of China provides that “Legally prescribed bodies and relevant organizations can file a lawsuit in the people’s court against behaviors that harm the public interest”, there is no judicial interpretation regarding the qualifications of the plaintiff who can bring environmental litigation
7 In Chinese:《关于水源地开采及其生态影响的情况说明》. Document is in Greenpeace’s possession. Inquiries for copies welcome.
8 For more details, see Appendix: Table 1
9 For more details, see Appendix: Table 2
10 https://www.yicai.com/news/2013/09/2990754.html
11 According to Shenhua, at the initial design phase, the Project’s estimated water intensity was 10 m³. In 2012, water intensity was 7.07 m³, and between January and April 2013, water intensity fell to 6.92 m³. Shenhua expects that upon the completion of improvements to the wastewater treatment project improvement, water intensity would decrease to 6 m³.
12 Please see Appendix 1: Table 3, where we have revised of our water consumption estimates in light of Shenhua’s new water intensity announcement
13 https://paper.people.com.cn/rmrbhwb/html/2012-04/12/content_1034485.htm?div=-1
14 https://www.wri.org/blog/china%E2%80%99s-response-air-pollution-poses-threat-water
15 https://61.134.118.34:8888/show.aspx?id=2475&cid=3
16 https://www.yicai.com/news/2013/09/2990754.html
17 https://www.wri.org/blog/china%E2%80%99s-response-air-pollution-poses-threat-water
18 https://www.sciencedirect.com/science/article/pii/S0301421512010786
19 https://www.sciencedirect.com/science/article/pii/S0301421513006253
20 https://www.nature.com/nclimate/journal/v3/n10/full/nclimate1988.html
21 See other assessments of the sector here:
KPMG: https://www.kpmg.com/CN/en/IssuesAndInsights/ArticlesPublications/Pages/China-Chemical-Industry-201109.aspx
IEA clean coal centre: https://www.iea-coal.org.uk/documents/82606/7944/Coal-to-oil,-gas-and-chemicals-in-China-CCC/181
MC-Chemicals: https://www.icis.com/Articles/2012/01/30/9527520/chinas-coal-based-chemicals-are-a-trade-off.html

Author: Calvin Quek
Calvin Quek is Head of Greenpeace East Asia's Sustainable Finance Program and leads the organization's engagement of the financial community. Prior to joining Greenpeace, he worked at Citigroup as an Investment Research Analyst in Singapore and led Citigroup Singapore's CSR and Volunteerism Committee in 2008. Calvin has an MBA from Peking University and an MSc in Wealth Management from Singapore Management University.
Read more from Calvin Quek →
« previous
More Power to Enforcement

Next »
To Dye or Not to Dye
Related Posts
It’s Time to Tweak Yourself to Save the Planet
Takeout Packaging – 3 Wishes For The New Year
Rising Seas: SEA’TIES’ Map of Solutions
Adaptation Strategies & Water Governance in the Netherlands & Bangladesh
Impact of Climate Change & Overfishing on Fishstocks in East & South China Sea
10 Years of CWR: Debra Tan Reflects On The Last Decade
The Latest opi