Bangladesh: 40% shortage of water in dry season
Arsenic in groundwater, dams and industrial pollution exacerbates seasonal scarcity
Switching to Made-in-Bangladesh may not work given sinking reputations

A recent visit to Bangladesh clearly illustrated the challenges many Asian countries, including China, face related to fresh water and product sourcing – two things that aren’t obviously connected but in reality often are. It was also clear that many global apparel brands apparently are ignoring risk at their peril.

Bangladesh, which exists on average only five meters above sea level in the world’s largest estuary delta made up of the Ganges, Brahmaputra and Meghna rivers, is plagued by periodic and devastating floods that can cover up to 60 percent of the country.

So the south Asian nation wouldn’t at first glance be associated with water scarcity but as in China, this is a real challenge for the country of 150 million where the population has more than doubled since independence from Pakistan in 1971 and GDP has grown steadily at 6 percent annually over ten years.

It’s not just floods, there is also arsenic in groundwater, dams and industrial pollution

Despite the often deadly flooding, arsenic contamination of groundwater threatens the health of an estimated 30 million people, according to the FAO, while chronic pollution of surface water caused by rapid industrial growth and population explosion mean that clean water is indeed an issue.

Although regional floods have been constant, human impacts in the form of pollution, climate change, shrinking forests, and damming along the major rivers that flow into Bangladesh from India and Tibet have made life even less predictable for a large segment of the population.

According to USAID, 95% of Bangladesh’s natural forests and 50% of its freshwater wetlands are lost or degraded. The country now has among the smallest areas of protected and intact forest in the world, making up only 1.4% of its landmass.

Switching from Made-in-China to Made-in-Bangladesh

In Bangladesh there are clear warning signs related to water as well as factory compliance with local social and environmental standards that raise the specter of risk familiar to anyone working in China.

In 2010, China accounted for about 40 percent of ready-made garment exports to both Europe and the U.S., according to a 2011 McKinsey report on sourcing in Bangladesh, but this is changing quickly.

“Bangladesh is clearly the next preferred step for the sourcing caravan”

Global garment buyers have indicated they will be cutting production in China by 10 percent over the next five years and Bangladesh with a young population, poverty, low wages and lax regulation is fast-becoming the new darling.

“Bangladesh is clearly the next preferred step for the sourcing caravan,” the Mckinsey report observed.

Fast-expanding production, however, has added to Bangladesh’s pollution woes and to climate change, which is altering the frequency and virulence of the monsoons from the Bay of Bengal and has brought greater salinity to these regions. In the north, flooding is also less predictable, says Runa Kahn, who runs Friendship, an organization that works with communities there. At the same time, increased greenhouse gases in the atmosphere are causing rapid snowmelt high in the Himalayas, which are the source of two of Bangladesh’s three major waterways. This has meant more volume in the rivers and rising sea levels but also portends freshwater shortages in the future as India and China facing their own water and energy shortages pick up the pace of damming upstream.

Yet until a tragic late-November fire at an eight-story textile plant making clothing for leading global brands, there was apparently not enough concern about environmental or social challenges to consider how speedy, low-cost production happened. It just did, feeding our insatiable appetites for fast fashion.

The tragic factory fire, which killed 112 garment workers housed in a building with no fire escapes and grilles on the windows brought that lack of attention into focus.

Wal-Mart, Sears, C&A and others were quickly named when labor activists found their branded clothing in the burned wreckage of Tazreen Fashions. The retailers responded that the production had been illegally subcontracted by local agents to the unauthorized factory.

It is common knowledge that many retailers and global brands sign contracts with compliant factories and these suppliers, with fast deadlines and squeezed margins, often pass the work onto others where safety regulations, labor and environmental standards are lax. Double factories – one for show and the second in reality producing most of the goods – also has been a chronic problem in China.

But as in China, many people in Bangladesh following the fire are now asking quite rightly, where does the ultimate responsibility lie?  In this case, passing the buck down the supply chain hasn’t been enough to protect the brands from the outrage and incalculable reputational damage that has followed.

Bangladesh – there is flooding but it’s dry

Bangladesh, a country roughly the size of England yet home to three times as many people, is among the world’s most densely populated countries, with 28,000 people occupying each square kilometer. Contamination of ground and surface water, as well as the population explosion mean that Bangladesh faces water shortages.

Already, there are seasonal issues. The Dhaka Chairman of National Disaster Management Advisory Council, MA Quassem was quoted in the August 22, 2010 Daily Star as saying, “Water availability in Bangladesh is around 90 billion cubic metres (BCM) during the dry season against the demand of about 147 BCM, a shortage of nearly 40 percent, resulting in drought- like situation in large parts of the country.”

This will only get worse as unregulated production continues apace, according to observers.

According to the UN, half the population lives on less than $1 a day and an estimated 48 percent of children are malnourished, which tied to the low-status and education levels of women.

Yet women make up 80 percent of the 3.6 million workers in the garment industry, which has grown on the back of a large and available workforce that is happy for the entry-level salaries of US$37 monthly that keep the prices of our fast fashion low.

So although wages are low, the 5,000 apparel factories that have opened in the conservative Muslim country over the past 20 years have been crucial to improving women’s lives, providing employment where previously there was none.

Still, as poverty levels decline, protests for higher wages, union representation and better working conditions are increasing. In a ten-day visit to Bangladesh, there were three violently enforced hartals or mass strikes against the government that paralyzed the entire nation on those days.  This should give pause to any global brand squeezing tight deadlines from suppliers in Bangladesh. 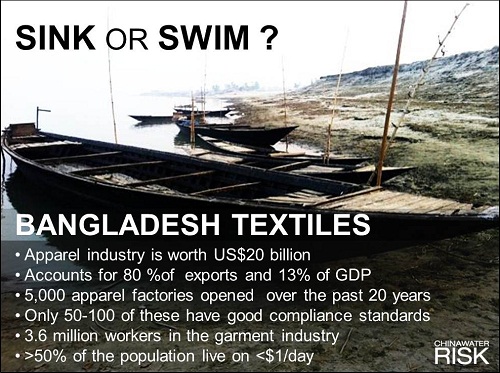 Brands and retailers that turn a blind eye to suppliers in pursuit of the lowest prices put themselves at risk. It is clearly in the interests of the global apparel sector to make sure that workers in Bangladesh are not producing clothing in hazardous conditions and factories are not polluting to achieve lower cost.

Yet Bangladesh’s $20 billion apparel industry, which represents 80 percent of  exports and 13 percent of GDP, has gone largely unchallenged by government, which has been reluctant to regulate, according to Kalpona Akter, executive director of the Bangladesh Centre for Worker Solidarity, quoted in the Dec. 8 Dhaka Daily Sun. Tazreen Fashions had lost its fire certification months before the fire, the paper said, but was still operating without even a fine.

It has been largely up to the global brands and retailers to set standards as they moved into Bangladesh in search of ever lower-cost production.

The Mckinsey report pointed to the habit of factories in Bangladesh subcontracting work as a significant risk to the global industry and indicated that the environmental compliance of most factories is only nascent. The report cites interviews with RMG sourcers as saying that only 50 to 100 of the 5,000 factories in the country have good compliance standards.

Certainly, there are many risks related to water and sourcing  in Bangladesh, several challenges ahead for a global apparel industry looking to the bottom line to the exclusion of all else – just as there are in China.

All photographs in this article are © Lisa Genasci

Author: Lisa Genasci
Lisa Genasci is the CEO and founder of ADM Capital Foundation (ADMCF) which provides support to some of Asia’s most marginalized children and works to combat intransigent environmental challenges facing the region.  Before working in the non-profit sector, Lisa worked for ten years with the Associated Press, three as a correspondent based in Rio de Janeiro, three on the foreign desk and four as a financial reporter in New York. She created and for three years authored a column on women and workplace issues, ‘On the Job,’ which was widely distributed in U.S. and foreign publications. In Hong Kong she wrote business stories for CNN and worked as a freelance features reporter for local publications. She currently writes a blog on Asian philanthropy and on some of the region’s most significant environmental and poverty challenges.
Read more from Lisa Genasci →
« previous
Weighed Down by ‘Gangnam Style’