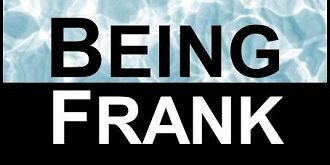 Perhaps the government has no choice but to be frank - leaving provincial governments with less wiggle room
Honestly, it's not just China that is polluting, it's a matter of timing
Time to change given recent frank comments on water and policy response

“Were you surprised at the frank comments of China’s vice minister of water resources?”

That was the first question fired at an interview with a “Week in China”. It was referring to Hu Siyi’s stark warning that “water usage had surpassed what [China’s] natural resources can bear”. Apparently, many were surprised that China would admit such weakness. I’m not going to go into the details of that interview – you can read it here nor am I going to discuss the warning and the corresponding decree issued by the State Council as you can read that here ­– I am going to mull about “being frank” – about dealing with stuff that no one wants to deal with/ talk about – stuff that makes us feel uncomfortable.

The frank face of the Chinese government

Water pollution and scarcity are certainly both unpalatable topics. But instead of being swept under the carpet, they have been taking centre stage with ministers offering up a slew of frank comments (see “Government Issues Stark Warning”). And as if that was not clear enough, the Minister of Water Resource, Chen Li gave an exclusive interview with China Daily echoing the same sentiment

“Water and water-related disasters are becoming more and more serious, due to rising populations, advanced urbanization and global climate change”

It would appear that the government is making much effort to be frank. Why is this?

Could it be because water resources have reached such a critical stage that they can no longer afford not to talk about it? Probably. Many commentators on water and the environment have shared the view that the failure to manage pollution is not because environmental laws are not in place, but because enforcement at a provincial level is lax.

Perhaps central government is being frank to send a message to provincial levels that they mean business. Indeed the new decree encouraging stringent measures and more cooperation between the provinces, could be interpreted as a top-down directive and laying everything on the table means provincial governments have less wiggle room.

I have been talking about water pricing for a while. When presenting on water, whenever I come to the slide that shows a potential 300%-500% rise in water tariffs, I always get the usual skeptical questions around the theme of “surely that is too much” / “surely that will be over a long period of time”. Well, the new progressive-use tariff plans submitted by the Guangdong government for residential water tariff hikes are proposing a base hike of 45% to a high of 306% (click here for actual table of proposed hikes. And if this is not enough to convince the skeptics, the report delivered by Premier Wen Jiaobao at the opening of the Fifth Session of the National People’s Congress this month, states that the  government will rationally set and adjust water resource fees in different localities, and carry out integrated price reform of water used for agricultural purposes.

It’s really happening. It’s happening because again there is no choice. I think it is safe to assume that if government is already mulling residential tariff hikes, it is only a matter of time before it reaches industry. Prices have to rise to make water solutions like wastewater recycling to potable levels and desalination economically viable (more on pricing from industry expert here). A price rise will also push businesses to use water more efficiently to protect profit margins.

I have raised this before and I will raise it again… what happens to smaller companies who cannot gather economies of scale to install water-savings measures ahead of the rise? Is it game over for the small guys – farmers and manufacturers alike? Could this accelerate industry consolidation? Regardless, smaller factories generally tend to be more polluting and less efficient at using water so either way, central government goals will be achieved.

Honestly, it’s not just China that is polluting

At a recent talk at the Canadian Chamber of Commerce, I was asked whether the Chinese government would do anything different given that they have always been aware of water issues but have chosen economic growth over the environment. Well, to be honest … it’s not just China that has been sacrificing environment for economic development – both Europe and the US did the same during their industrialization periods. It’s a matter of timing.

I believe that the frankness shown by the government indicates that a tipping point has been reached. Water resources have reached a scarcity level (caused by climate change, inefficient use, pollution or otherwise) where they have to be managed carefully so as to ensure they do not stifle economic growth and threaten stability.

Oops, we missed all the targets

China has failed to meet its water pollution targets for 2011. There were comments abound from environmentalists that they have NOT been frank about how much they have missed the targets by. Whilst this is important, perhaps what is more important is that “The Shanghai Daily”, has Zhang Ping, the head of the National Development and Reform Commission, putting this down to a failure to transform the economic development model.

“There are a lot of complicated reasons for failing to meet the targets. The biggest is that we have not transformed our economic development model,”

“Our means of growth are still too coarse and our structural adjustment is lagging behind.”

Many economists have commented that now is not a time for re-balancing the economy, but as Zhang Ping indicated, many of these air/water pollution targets in the 12th Five-Year Plan (FYP) can only be met if there is a change in the economic model.

Surely his comments, the 12th FYP targets and No.1 Doc targets, all signal that changes are coming. It’s now in ‘The Plan’ and if anything, ‘The Plan’ is always followed. Fast forward to 2015 … it would be great to say “I love it when a plan comes together”.

Others being frank too

It seems that other countries are also being frank too. They are being frank about not wanting China buying up agri land in their country in their bid to ensure food security. The New York Times reported that Chinese companies have offered to buy huge tracts of farmland in Brazil but Brazilian officials have steered them towards a production agreement. The same article also cites that the Chinese remain undeterred offering to provide credit to farmers instead. Meanwhile, on the other side of the world, a New Zealand court halted the first ever sale of dairy farms to a Chinese company. Looks like China’s land grab strategy to ensure food security for a prosperous ever after may hit some frank stumbling blocks.

Given the unpalatable water scarcity, pollution and price hikes are now discussed openly, isn’t it time for us to face the uncomfortable truth (ok, and inconvenient) that business as usual may not work. It is no point pretending that water risks are not going to affect us when the Chinese government is clearly saying that they will.

China’s government’s policy response to China’s water crisis could effect a paradigm shift – change the way we do business, manufacture products, grow our food, influence our consumption patterns and dictate trade. Be frank and ask yourself … are you ready for this?

Author: Debra Tan
Debra heads the CWR team and has steered the CWR brand from idea to a leader in the water risk conversation globally. Reports she has written for and with financial institutions analyzing the impact of water risks on the Power, Mining, Agricultural and Textiles industries have been considered groundbreaking and instrumental in understanding not just China’s but future global water challenges. One of these led the fashion industry to nominate CWR as a finalist for the Global Leadership Awards in Sustainable Apparel; another is helping to build consensus toward water risk valuation. Debra is a prolific speaker on water risk delivering keynotes, participating in panel discussions at water prize seminars, numerous investor & industry conferences as well as G2G and academic forums. Before venturing into “water”, she worked in finance, spending over a decade as a chartered accountant and investment banker specializing in M&A and strategic advisory. Debra left banking to pursue her interest in photography and also ran and organized philanthropic and luxury holidays for a small but global private members travel network She has lived and worked in Beijing, HK, KL, London, New York and Singapore and spends her spare time exploring glaciers in Asia.
Read more from Debra Tan →
« previous
Redefining Fiduciary Responsibility

Next »
How Much Water Do You Use?
Related Posts
Greenie Web: Decarbonizing Websites
Conscious Fashion App Smthgood Launches to Woo Eco-Driven Asian Women
Tuvalu will Upload itself to the Metaverse. It’s a Desperate Plan – with a Hidden Message
An X-mas Feast in 2050
Carbon Canteen: My Initiative to Reduce Independent Schools Foundation’s Carbon Footprint
Food Footprint: Which Diet Creates The Least Amount Of Food Waste?
The Latest opi