Oil To Fall As Electric Vehicles Take Off

WWF's Champagne on the risks & opportunities in electric vehicles, plus how the oil industry will be impacted Climate change – it’s an unprecedented global challenge for humanity, one that will cause catastrophic damage to life if it’s not solved or at least tempered significantly. However, from within any great challenge to humanity is the potential for transformational solutions and technological innovation. There is potential for financial opportunities for those who have the foresight. And there could be major loss for those that don’t.
If history has taught us anything, it is that innovation can make or break entire industries. The failure to anticipate transformational technologies has cost corporations and their investors billions of dollars in the past. Yet the need to deliver short-term results at the expense of long-term capital growth and preservation guarantee that history will repeat itself.

Humanity has known for some years that the main reason driving climate change is the burning of fossil fuels. At the current levels of fossil fuel extraction, the Earth’s temperature is projected to increase by somewhere between 4 degrees Celsius and 6 degrees Celsius. This will cause catastrophic damage to life, so as a society we must collectively limit this rise to well below 2 degrees Celsius. Achieving this requires a global transition from fossil fuels to renewable sources of energy as well as using energy more wisely.
To have a chance at keeping rise in Earth’s temperature below 2 degrees Celsius, 80% of known fossil-fuel reserves must stay in the ground. Hong Kong and many Asian stock exchanges feature companies heavily dependent on fossil fuels.

There will inevitably be major devaluations for co’s with fossil fuel assets
“…there remains a general lack of understanding of this threat – especially among Asia’s investors.”

Oil, coal, and gas companies have been valued by how much carbon they can burn and also by how much they can potentially burn in the future by measuring their reserves as assets. However, we now know we cannot burn all the proven fossil fuel reserves if we are to keep the global average temperature rise below 2 degrees. This indicates that what were once considered assets will now have to face large write-downs.
Given the increasing resolve of governments worldwide to limit the use of fossil fuels, coupled with advances in low-carbon technology, there will inevitably be major devaluations for these companies. While some investors are waking up to the new reality, there remains a general lack of understanding of this threat – especially among Asia’s investors.
In our new WWF report – No Middle Road – we detail the rise of one of many solutions to climate change: the rapid growth in electric vehicles (EVs) in China. EVs offer lower and potentially CO2-free transport and their rapid adoption is being driven by evolutions in technology and through government policy. Crucially, as they quickly scale up, they will vastly reduce the demand and need for oil. We see the proliferation of EVs as costs fall due to improvements in battery technology.  We further expect cost parity with internal combustion engine (ICE) vehicles in the mid-2020s and as a direct consequence of this proliferation, 1 million barrels per day (b/d) of crude oil could be displaced by the late 2020s.  This could rise to 2-4 million b/d by 2035 and 4-6 million b/d by 2045.

This may not seem like a catastrophic outcome for oil producers: after all, 1 million b/d is a small amount compared with current global demand of 95 million b/d.  But it is important to remember that marginal changes in supply and demand – and the speed of change – determine commodity prices.   Additionally, oil producers, facing the risk of holding a permanently impaired asset, would have no choice but to offload their reserves quickly causing excess supply, driving oil prices down further resulting in a downward spiral. 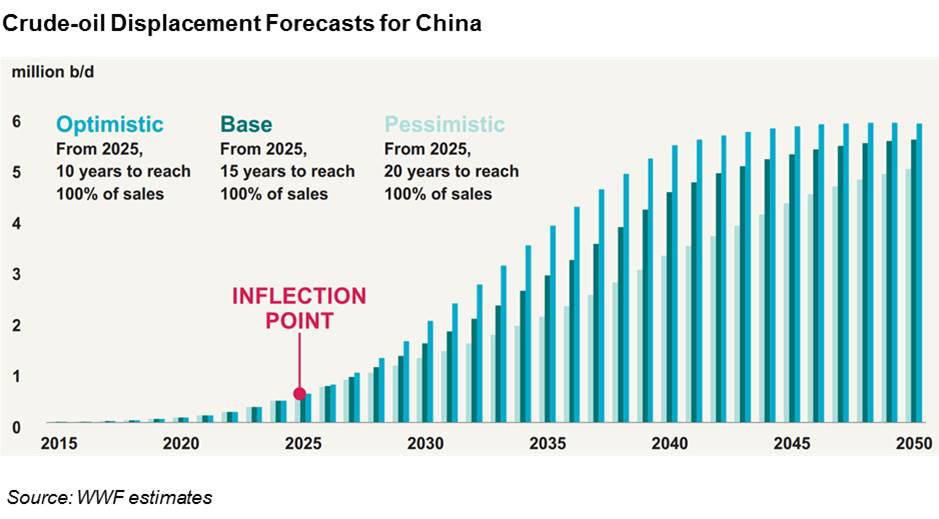 Our premise requires only a moderate pace of technological advancement over time and no precision over when significant breakthroughs will take place – just that they will. We expect the late 2020s and the 2030s to be a period of widespread adoption, playing out over 10-20 years given the typical vehicle replacement cycle.

“… the impact on the oil industry will be catastrophic, with the impact felt globally.”

Should our views be correct, the impact on the oil industry will be catastrophic, with the impact felt globally. However, in our analysis, we focus primarily on the perspective of the Asian investor and draw upon the experience of China in particular to illustrate the potential for an orderly re-allocation of economic capital from the obsolete (ICE vehicles) and oil to the alternative (EVs and renewables).

We believe the best course for Asian institutional investors is to:
First, establish a prudent carbon-risk exposure policy consistent with global commitments to tackle climate change. Compared with their European counterparts, very few Asian asset owners have developed such policy. The construction of an investable decarbonised index hinges upon the availability of data on individual firms’ carbon footprint. A more holistic approach would be to calculate a composite score for each invested entity based on its direct and indirect exposure to carbon and climate-policy risks.
Next, we recommend de-risking portfolios of carbon intensives companies or engaging companies if it is possible for them to transform their businesses to be compatible with a low-carbon economy. EV proliferation could lead to permanently cheap oil. There will be an overwhelming case for a substantial reduction in exposure to oil and oil-related assets. This demonstrates that prudent climate and investment policies are not necessarily in conflict.
Lastly, we recognise that in certain circumstances de-risking may not be feasible in the immediate term, so we recommend constructing a dynamic hedging strategy. The decarbonised index is effectively a “free option on carbon”, allowing investors to substantially reduce their exposure to carbon risks while maintaining a very similar risk-reward profile to their benchmark index.

“…many energy co’s and investors are grossly underestimating the risk of widespread EV adoption.”

While there are uncertainties in technology, consumer behavior and oil prices, one certainty is Beijing will be rapidly encouraging the uptake in EVs and it should be apparent that many energy companies and investors are grossly underestimating the risk of widespread EV adoption. Investment owners and managers can play a vital role in global efforts to mitigate climate change by reallocating financial resources from polluting, low-return assets to more sustainable alternatives.

Author: Jean-Marc Champagne
Jean-Marc’s main focus is heading up WWF’s newly launched Bankable Nature Solutions initiative for Asia, which aims to originate and develop scalable bankable projects with conservation impact. He is also managing the Asia-Pacific portion of the origination facility for the €160 million Dutch Fund for Climate and Development. He was instrumental in launching the Climate Impact Asia Fund in January 2020 and is a member of its Investment Advisory Committee. He also advises institutional investors, lenders, and underwriters on the financial and economic risks and opportunities related to climate change and environmental issues. Prior to WWF, he spent 17 years in the financial industry advising institutional investors on equities and equity derivatives. He started his investment banking career in 1997 with Merrill Lynch in New York City and has been based in Hong Kong since 2004, working for BNP Paribas and Jefferies. He graduated from Clarkson University in Potsdam, New York.
Read more from Jean-Marc Champagne →
« previous
Scotland: The Hydro Nation

Next »
Fall of The Cement Industry: A Painful Transition
Related Posts
Marine Life in a South African Bay is Full of Chemical Pollutants
2022 Top 10 Trends in Responsible Investment in China
Top 10 CSR Trends in China 2022
Why Seaweed Growers Need to Stay Rooted in Science
How Singapore’s Water Management Has Become A Global Model for How to Tackle Climate Crisis
Groundwater – Making the Invisible Visible
The Latest opi