Hong Kong’s water supply concerns are increasingly urgent, and a regional collaborative approach may be the best way to address them. Gaining a robust understanding of the complex relationship between Hong Kong and China is critical for developing sustainable solutions. To this end, a uniquely tailored analytical framework for collaborative governance is needed to account for the variety of water management agencies within the region’s “two system” environment. Such a framework should be meaningful to both practitioners and scholars, integrating the latest research with an understanding of current and evolving realities.

As described by Su Liu, there are growing concerns about Hong Kong’s principal water source. The Dong River supplies roughly 80% of the city’s water. Despite contractual agreements, the sustainability of this source may be compromised in the coming decades by demand growth in Hong Kong and up-stream in Guangdong. The province is likely to continue industrializing, as evident in its effort to increase power generation capacity by 45% between 2010 and 2015.

Complicating this arguably untenable situation, Hong Kong’s water governance regime faces three critical challenges: fragmentation, inefficiency, and moral hazard.
First, as outlined by Liu and Jessica Williams, water governance in Hong Kong involves 11 departments across three ministries, with each having some jurisdiction over water supply and usage. This fragmentation poses a challenge for strategic and operational coordination. Second, the efficiency of Hong Kong’s water management system can be improved. Consumer pricing is not currently used as a tool for demand management, and fees are below those in benchmark cities. Finally, Hong Kong’s water governance regime suffers from a moral hazard resulting from the assumed sustainability of Dong River supply. This has led to chronic underinvestment in the types of alternative supply technologies that are the hallmark of sustainability in cities like Singapore.

Solutions lie in closer collaboration between HK & Guangdong agencies, but how to achieve this?

The solution is a closer collaboration between Hong Kong and Guangdong agencies for long-term supply strategies. This relationship is complex and should be thoroughly understood before it can be further developed. To this end, the interplay among agencies for transboundary water management can be viewed through the lens of theoretical frameworks.
Institutional Analysis and Development (IAD) framework
One example is the Institutional Analysis and Development (IAD) framework, created by Nobel Prize-winning scholar Elinor Ostrom. The IAD (Figure 1) systematically examines several dimensions of institutional complexity, broadly classified into situational characteristics, action arena, and outcomes resulting from patterns of interaction. The IAD has been applied in a variety of environmental contexts and continues to inform institutional studies of collective action and self-ordered management of common pool resources. Ultimately, it describes a “third way” of governance, beyond government and market. 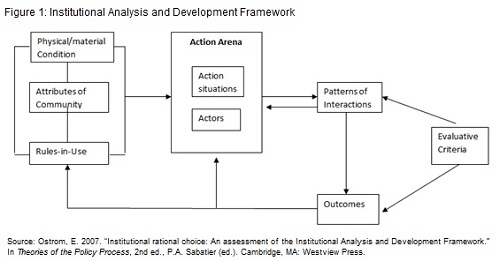 Concerning Hong Kong’s situation, the IAD is useful but incomplete. It focuses on a single action arena and assumes a degree of uniformity among actors. While this is a valuable tool for analyzing institutional dynamics at certain scales (primarily local), it has difficulty accommodating the complexities of a transboundary environment under “two systems.”

By contrast, Jensen and Lange’s transboundary water governance framework (Figure 2) examines the political economy of water at both the national and regional scales, accounting for multiple stakeholder types and institutional arrangements. This framework is useful in its focus on national interests and development strategy, both of which are critical factors in transboundary resource management efforts. However, it lacks the detailed analysis of action arenas, situations, and evaluative criteria characterizing the IAD. Figure 3 illustrates the proposed framework, which structurally resembles the IAD but adds a transboundary dimension critical for this case. This framework is novel in applying differing conceptualizations of water unique to particular scales. For the national political economy it treats water as a toll good, with a provider (Guangdong) charging a user (Hong Kong) for access. While this conceptualization is appropriate for contractual relationships, it alone fails to recognize the broader sustainability challenge. As such, the new framework’s regional analysis also treats water as a common pool resource, applying the logic of collective management that is a hallmark of Ostrom’s research.

The new framework makes four contributions meaningful to both practitioners and scholars:

Benefits from the proposed combination framework

In conclusion, much has been written about the practical dimensions of Hong Kong’s water governance regime, with many useful suggestions. However, analyses should not fail to recognize the value of theory to systematically conceptualize these challenges.

“It provides a “roadmap” for the development of solutions to similar challenges in politically fragmented regions, and also to global challenges such as climate change.”

The proposed framework offers three answers to the “so what?” question often asked by practitioners in reference to theory. First, it contributes to the formulation of strategies that can be implemented immediately. The recognition of water as a common pool resource, rather than a toll good, engages policymakers in a broader debate about supply sustainability rather than a narrow focus on usage contracts. Second, the framework provides a new approach to understanding the multitude of transboundary environmental resource challenges (e.g. air pollution) that previously lacked a robust analytical tool. Finally, it provides a “roadmap” for the development of solutions to similar challenges in politically fragmented regions, and also to global challenges such as climate change.

Author: Kris Hartley
Kris Hartley is a Singapore-based researcher and consultant focusing on economic development, public policy, and urbanization. With a decade of public and private sector experience, he has consulted on a variety of topics including earthquake recovery, financial regulation, infrastructure asset management, and nuclear energy policy. Working on solutions with high economic and social impact, Kris is currently conducting research about urban revitalization and cultural preservation in Singapore, provincial governance and economic competitiveness in Vietnam, and water resource management in the Hong Kong region. Kris is also a Ph.D. candidate at the Lee Kuan Yew School of Public Policy at the National University of Singapore, where he holds the President’s Graduate Fellowship. His education includes a Master of City Planning in Economic Development from the University of California, Berkeley, an MBA with a focus in International Management from Baylor University, and a BA in Classics from the University of Tennessee.
Read more from Kris Hartley →
« previous
Shale Gas & Water: A Tale of 3 Countries