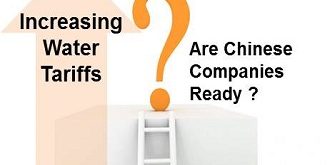 SynTao’s Dr Guo explores the water bubble and the inevitability of higher tariffs. To avoid social unrest, government will not allow water prices to rise too rapidly, particularly for domestic use.
Water co’s underperform due to low tariffs.
Industry could bear the brunt of tariff hikes given a 12th Five Year Plan with more stringent pollution control.

Water has become a popular investment theme among stock market investors in Chinese A-shares recently. Newly listed on March 29th, Chongqing Water Group (601158.SH) attracted a great deal of interest for the following reasons: (a) the company’s combined business of water supply and wastewater treatment; (b) combined business of water plant and pipeline system; and (c) the absence of a local competitor in the region. The stock price rose 129% on the first day of trading, reaching a closing price of 12.1 RMB, which made it the best performing stock of the year (by far) due to its high first-day-increase.

A few days later, another water company had a similarly spectacular debut. Origin Water (300070.SZ) enjoyed a 120% first day increase. Observers said that water had become even more expensive than wine (A-share). In the eyes of investors, the true value of Origin Water lies in its development of the core technology of Membrane Bio Reactor (MBR). Though MBR is not yet widely known, people have high expectations for this company. The rationale is simple: as China lacks water and faces a great pollution challenge, high-tech firms that can solve these problems will be appreciated and rewarded in the near future. Is there a water bubble?

The success of Chongqing Water Group and Origin Water illustrates that investors recognize the growth potential of the water business. However, these results do not apply to all water companies. Quite a number of water companies in China, particularly municipal water supply companies, are struggling for survival. According to the China Economic Information Network, 46% (795) of 1723 municipal water supply companies in China are not reaping profits; similar case for 27% (66) of 246 wastewater treatment companies. There are various reasons, such as high operational costs and poor management. However, the main reason must be China’s low water price. Currently, the average water price in China is about 0.31 USD per m3, a massive difference when compared to prices in other countries: 3.01 USD in Germany, 0.74 USD in US, 0.65 USD in Brazil and 3.00 USD in Japan and Hong Kong. It is estimated that Chinese families spend 0.6% of their income on water, a much lower percentage than the world average of 2%. In addition, wastewater treatment fees, collected since 1999 in China, are relatively low too.

The contradiction is clear: on one hand, active stock market investors are extremely keen to invest in water businesses operating in China, but on the other hand, water companies are under pressure due to low water tariffs. This situation reflects a gap between reality and investor expectations. Whether these expectations can be realized largely depends on government decisions to increase water prices. Only when water prices increase will water companies improve their performance and live up to the expectations that have spurred such high stock prices. Otherwise, the ‘water bubble’ must collapse at some point.

Water prices on the rise

Will the Chinese government increase water prices? The answer is, ‘without a doubt’. Premier Wen Jiabao said in his work report of 2008 and 2009 that the government will “increase wastewater treatment fee appropriately…proactively advance water price reform, increase non-agricultural water price, and improve collecting system for water resource fee.” This clear central government policy encourages local municipal governments to implement water price hikes, and most cities have actually pushed through increases. For instance, the water price increased from 3.7 RMB to 4 RMB per m3 in Beijing, from 2.9 RMB to 3.4 RMB in Tianjin and from 2.8 RMB to 3.45 RMB in Kunming.

Many citizens have not been happy with such steep price increases and have raised their concerns: poor disclosure on water cost, government manipulation of public hearings, and the governments’ sale of water assets to foreign companies. In response to public concern, the central government released a policy document in 2009 that required local governments to adhere to certain legal procedures and consider the public when deciding on adjustments in water price. In addition, Wen Jiabao emphasized in his 2010 work report that any price reform should take special consideration of the low income groups.

Who is impacted by higher tariffs?

To avoid social unrest, the government will not allow water prices to rise too rapidly, particularly for domestic use. Those who will first feel the pinch are the large water discretionary consumers, such as spas and car wash shops. These services are non-essential, in addition to consuming a great deal of water. Water price increases will impact these businesses dramatically unless they can pass on the price costs. For instance, in Beijing, the water price was raised from 41.50 RMB to 61.68 RMB per m3 for the car washing business and from 61.50 RMB to 81.68 RMB per m3 for the spa business, which makes them the highest cost water users in the country. When water scarcity becomes more severe, these businesses might be restricted in their operations or even shut down by the government. This was already seen earlier this year in southwest of China where the region suffered a severe drought.

Water polluting companies will also face increasing financial pressures. The Ministry of Environmental Protection (MEP) has already indicated that the forthcoming 12th Five-Year plan will include more stringent emission control criteria. As a result, it is quite likely that water intensive and polluting companies will be burdened with higher pollution abatement costs, along with higher water tariffs.

Improved water efficiency is an important solution, and we see some leading global firms making great progress on water management. Coca-Cola, for instance, now calculates water-productivity ratios, i.e. how much water is used in each liter beverage. Water efficiency need not be high-tech or complicated. Sometimes tiny changes can have meaningful results. Swissotel, a hotel in Beijing, upgraded flush valves for all of its toilets. The hotel saved 11,794 RMB in water costs per quarter, while the total investment was only 11,760 RMB. This illustrates what companies can do to save water as well as money. It also underscores the huge opportunity which is beginning to capture investors’ imaginations.

Ed’s Note: Analysts from the Global Water Intelligence see the IPO of Chongqing Water Group and Origin Water as the “clearest sign yet that China’s stock market is in the thrall of sheer unbridled optimism” over water. Two relevant quotes from a Bloomberg report:

Next »
It Would Never Have Happened Without CDM. (Honest)
Related Posts
Hong Kong Water Cherishing Campaign to Tackle the Water Crisis
5 Ways Fungi Could Change The World
Fashion: Still Too Little & Too Slow In The Climate Fight
Marine Life in a South African Bay is Full of Chemical Pollutants
2022 Top 10 Trends in Responsible Investment in China
Top 10 CSR Trends in China 2022