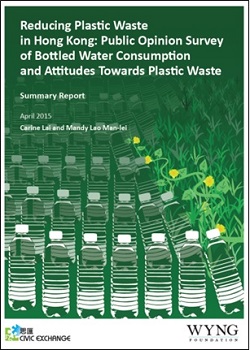 In April 2015, Civic Exchange published the report “Reducing Plastic Waste in Hong Kong: Public Opinion Survey of Bottled Water Consumption and Attitudes Towards Plastic Waste”.
Hong Kong has a plastic waste issue. The Hong Kong Government began its new plastic bag levy scheme on 1 April, 2015. Although plastic bottles contribute a rather small portion of plastic waste in Hong Kong, Civic Exchange took an interest in bottled water consumption, as it is thought that people currently choosing to consume bottled water could help reduce plastic waste if alternatives were made available.
The report includes results from a public opinion survey of 1,013 respondents. The report’s co-lead author Mandy Lao & Civic Exchange consultant, expands below on some key takeaways.

Globally, the consumption of bottled water has been on the rise in recent years. This has led to a growing concern over where the used plastic bottles go. This is also the case in Hong Kong, which happens to have a high daily municipal waste generation rate compared to other developed Asian cities.1 Generation of municipal solid waste has put enormous pressure on the three existing landfills, which are expected to reach full capacity before 2020.2

Plastic waste accounts for 19.7% of municipal solid waste in Hong Kong.3 This translates to 1,826 tonnes of plastic waste generated every day. Bottled water consumption, a common habit in Hong Kong, is an unnecessary and avoidable source of plastic waste.
Plastic bottles are made from fossil fuels and the plastic manufacturing process uses more than twice as much water as it takes to fill the a bottle. The plastic, not biodegradable, breaks down into small pieces after prolonged exposure to sunlight, and can then be swallowed by wildlife.

Over half of the respondents of the survey drink at least some bottled water. Further respondent breakdown (see chart below – click on chart below to enlarge): Based on purchase frequency and spending data (see chart above), we estimated that about a quarter of the respondent pool are occasional consumers of bottled water who buy it once a month or less, or spend less than HKD10 a week on it.

Plastic waste & tap quality not the issue, convenience is the main consideration

Findings indicate that bottled water purchases in Hong Kong are driven mainly convenience and habit, not health concerns. Most respondents bought bottled water occasionally when going out for shopping or other errands. They mainly purchased it in convenience stores, and mainly bought bottles of less than 1 litre in volume, which are usually meant for immediate personal consumption rather than for sharing or household use.
There was no statistically significant relationship between people’s bottled water consumption and their rating of Hong Kong’s tap water quality. However, the convenience factor was not limited to bottled water. In both cases (bottled & tap), convenience was the most commonly given reason by respondents. Among respondents who only or mostly drink tap water, cost is the second-most common reason (see diagram above).
Among the 7% of respondents who drink only or mostly bottled water, the second-most commonly given reason is a lack of other options. These respondents often said that they drank bottled water supplied by their employers as there was no potable tap water available at their workplace. This implies that a substantial number of these heavy users can be persuaded to switch to tap water but inconvenience obstacles need to be overcome.

Inconvenience needs to be overcome to reduce bottled water consumption; government should take the lead

Inconvenience helps explain why so few people use water dispensers or drinking fountains. Only about a quarter of respondents had used a public water dispenser in the last 6 months. Respondents and focus group participants were put off using water dispensers due to the lack of convenient locations (mostly located in recreational & sports facilities, public venues, and schools & universities) and the hassle of bringing their own bottle along to refill.

To encourage people to reduce consumption of bottled water, water dispensers should be more conveniently located. This way people are more likely to use them. The government should promote the provision of water dispensers in places with high pedestrian flow and locations need to be frequent and accessible enough to make them competitive with bottled water from convenience stores.
They should be provided in prominent locations at shopping malls, transport hubs such as MTR stations and bus terminuses, and major shopping and entertainment districts. The entrances to municipal services buildings and wet markets are also possible locations, provided water dispensers are kept far enough away from bad smells and unhygienic sights.
Beyond installing water dispensers on public property, the government should also collaborate with private developers and semi-public bodies such as the MTR Corporation and the Housing Authority.

HK govt. should take the lead in education & infrastruct0ure to make using a refillable water bottle a community norm

Besides providing the infrastructure, education and promotion are also needed to emphasize the benefits of tap water and also the importance of plastic waste reduction & recycling for environmental reasons.
If these concepts become a community norm, people will be more likely to self-regulate their behaviour and make it a habit to carry a refillable water bottle. After all, many people in Hong Kong now carry a reusable bag after the levy, so a refillable water bottle shouldn’t be far off. Author: Mandy Lao
Mandy Lao Man-lei is a senior project manager at Civic Exchange. She graduated from Cardiff University with a master’s degree in city and regional planning (specialising in urban and built environment). Mandy has rich experience in directing and managing social and policy research projects. She is the co-author of Rethinking the Small House Policy published by Civic Exchange in 2003. She also co-authored Walkable City, Living Streets in 2012 and authored Small House Policy II: An Update in 2013. Her major research interests include urban built environment, public space design, community planning and sustainable development.
Read more from Mandy Lao →
« previous
Corporate Water Reporting in China
Next »
Corporate Strategy & The New Chinese Consumer
Related Posts
Not Just A Drop In The Ocean
Sponge City Is Transforming Urban Flood Management
Why Isn’t Water Top Of The Climate Agenda?
HK Businesses Go Circular Via A Digital Marketplace
Governance Is Still At Low Tide
Water Risk In The ICT Sector
The Latest opi

Not Just A Drop In The Ocean
Sponge City Is Transforming Urban Flood Management
Why Isn’t Water Top Of The Climate Agenda?
HK Businesses Go Circular Via A Digital Marketplace
view all >
Subscribe To Our Newsletter opi