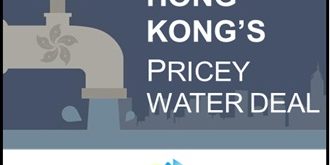 The DongShen Agreement ensures the bulk of HK's freshwater but discussions need to go past the price tag
Heavy govt subsidies have resulted in overconsumption while leakage cost HKD1.35bn in revenue in 2013
As cities in the PRD respond to environ change, HK can no longer live with the illusion of having abundant water

The Dongjiang, or East River, flows 562 kilometres from Jiangxi to eastern Guangdong, as a water lifeline to seven mainland cities in the Pearl River Delta, including the metropolises of Guangzhou, Dongguan and Shenzhen. In addition, it supplies 80% of the freshwater to Hong Kong, which is the city furthest downstream.
That supply has come under recent scrutiny, as Hong Kong renegotiates the so-called “DongShen Agreement” with Guangdong Investment Ltd., which is effectively controlled by the provincial government, and expires later this year. In particular, much attention has focused on the fact that Hong Kong paid HKD4.2 billion, or RMB3.7 billion, to Guangdong for water in 2015 — almost double the amount in 2001.

In April, Hong Kong legislators paid a high-profile, two-day visit to Guangdong to observe the Dongjiang’s supply and facilities. The lawmakers’ comments after the trip reflected that their main concern was the financial cost of raw water, which is paid to a certain level regardless of how much Hong Kong actually uses. But discussions did not go far past the price tag – to the more complex issues of Hong Kong’s water security, dependence on one source, and consumption habits.

Regionally, pressure is mounting in the Pearl River Delta (PRD) after decades of industrialisation and urbanisation in Guangdong, whose economy accounts for 10% of China’s gross domestic product. The PRD population boom means that the Dongjiang now has to sustain more than 40 million people, including Hong Kong’s more than 7 million.  In 2004, the stress placed on the Dongjiang surged past the level deemed “ecologically safe.”

In May, two Hong Kong organisations, Civic Exchange and ADM Capital Foundation (ADMCF), published a 127-page report called “The Illusion of Plenty: Hong Kong’s Water Security, Working Towards Regional Water Harmony” on this issue.
Since May, that report has spearheaded ongoing media coverage and public attention, as well as engagement with the government authorities, such as Hong Kong’s Water Supplies Department (WSD). Civic Exchange, an independent public policy think-tank, and ADMCF, a foundation that produces environmental research, are both promoting practical recommendations to make water conservation a priority.

… the bulk of the water the city consumes every year

DongShen Agreement negotiations continue as Hong Kong welcomes a new government administration, with the swearing in of Chief Executive Carrie Lam on July 1 – a date which also marks the 20th anniversary of the former British colony’s handover to Chinese rule. It is this new leadership that will carry out talks with Guangdong.
The current DongShen Agreement gives Hong Kong exclusive, guaranteed rights to as much as 820 million m3 of raw freshwater each year. That is the bulk of the 1.25 billion m3 of freshwater and seawater (the latter mostly used for flushing toilets) the city consumes every year – equivalent of nearly 860 nearly full bathtubs per person.
Subtropical, rainy Hong Kong may seem blessed with an abundance of water; yet the territory’s local freshwater resources are limited compared to demand. In the 1960s and ’70s, Hong Kong regularly suffered from water shortages and imposed rationing. It was in 1965 that the then-colonial government first struck the DongShen Agreement.
Hong Kong last imposed water rationing in 1982. It was at about the same time that the Dongjiang supply surpassed the city’s locally sourced water. In 1965, only a bit more than 20% of Hong Kong’s freshwater came from the Dongjiang; the share has since quadrupled.

HK’s state-subsidised water tariffs have been frozen since 1995

In addition, Hong Kong’s state-subsidised domestic water tariffs – meaning what households and companies pay each month – have been frozen since 1995. The city’s water charges are among the lowest in the developed world, less than New York, London, Tokyo and Beijing.

Shielded from rising costs, HK’s avg per capita domestic water consumption is 21% higher than global avg
…leakage is another factor, costing HKD1.35bn in revenue in 2013

Shielded from rising costs – and largely unaware of the source of their water or larger conservation concerns – Hong Kong users have had little incentives to control their consumption, which has sharply risen since 1990.  Hong Kong’s average per capita domestic water consumption is 21% higher than the global average.
Another factor that contributes to high consumption is leakage in the city’s distribution network. It is estimated that one-third of Hong Kong’s freshwater is lost through leaky government mains, private pipes or even theft. The lost amount is roughly equal to the city’s local catchment, and was equivalent to HKD1.35 billion (RMB 1.18 billion) in revenue in 2013.
The rate of overall water losses in Hong Kong increased from 26.5% in 2010 to 32.5% in 2015. It is considerably higher compared with other developed cities – Tokyo has successfully reduced its leakage rate from 20% in 1955 to 2.7% in 2010 – but comparable to the rate in Asia’s less developed cities, where an average of 30% of water is lost.
Leakage from Hong Kong government mains has decreased somewhat, from 20% in 2010 to 15% in 2015. But water lost from private pipes has surged sixfold over the same period, from 2.5% to 14%. One of the greatest barriers to tackle overconsumption is the opacity of water usage figures, particularly from private companies that do not fall under the Hong Kong stock exchange’s disclosure rules.
In 2008, the WSD introduced the Total Water Management strategy to diversify its water supply, including providing solutions to combat water disruption due to climate change. It also pledges to provide “one of the safest water supplies in the world”.
Still, Hong Kong needs a broader policy to address its water supply. Some of the recommendations in “The Illusion of Plenty” report include:

As cities throughout the PRD respond to urban and environmental change, Hong Kong needs to keep up with a comprehensive water policy – as we ultimately all share a water resource.

And the larger issue goes far beyond the PRD. China in general is facing problems with water scarcity and supply. With freshwater only comprising 2% of the world’s water and threats of climate change, Hong Kong can no longer afford to live with the illusion of having an abundance of water.