Are Policy-makers Asking the Right Questions?

Water conservation is an important policy tool to help accomplish the objectives of the Hong Kong government’s Total Water Management Strategy (TWM Strategy) and it therefore deserves to be closely examined for its promises and presuppositions.  For instance, out of a target of 236 million m3 of water consumption reduction, to be achieved in the year 2030, a reduction of 100 million m3 is expected to result from water conservation efforts.

“… a critical review of the water tariff structure and level in Hong Kong has provided ample evidence to support the argument that the city’s outdated water tariff regime, if remained unchanged, will pose as a great barrier to achieving ambitious water conservation goals set under the TWM Strategy.”

The ultimate success of the TWM Strategy thus hinges, to a large extent, on the effectiveness of the implementation of water conservation measures.

At the moment, we lack sufficient data to assess the overall performance of water conservation measures already introduced. Nevertheless, a critical review of the water tariff structure and level in Hong Kong has provided ample evidence to support the argument that the city’s outdated water tariff regime, if remained unchanged, will pose as a great barrier to achieving ambitious water conservation goals set under the TWM Strategy.

Hong Kong’s water tariff structure has been frozen at HK$4.58/m3 since 1995, largely as a result of the government’s repeated failure to garner political support to introduce reform actions.  Consequently, when we compare Hong Kong’s water tariff with other countries with similar GDP’s, we see that whilst many nation’s water charges appear to reflect their GDP, Hong Kong’s current policy is not aligned with the majority of the developed world. While the water tariff has remained locked at this low level, the cost of supplying water has shot up from HK$4.50/m3 in 1995-96 to HK$7.60/m3 in 2011-12.  In other words, whereas the government was able to achieve, on a per m3 basis, a cost recovery rate of 102 percent in 1995-96, nowadays it can recoup only about 60 percent of its expenditure on supplying water.  Once again we can see that Hong Kong is completely out of line with the current global trend. Hong Kong’s Water Supplies Department’s (WSD) revenue-expenditure gap, which accumulated to a staggering figure of HK$41.7 billion for the period of 2002-2012, had to be covered by government subsidies, paid for by taxpayers.

Several major policy issues immediately emanate from the enormous magnitude of taxpayers’ subsidy going to water supply services.  Who benefits from these subsidies, at the cost to the taxpayers?  Are the subsidies justified, and, if they are, then on what grounds?  An analysis of the relevant data on water consumption and water price shows that while some of the subsidies could be justified, most are not.

14% of domestic users do not pay a penny for water

First, currently, about 14 percent of domestic account-holders do not pay even a single penny for water, thanks to a water tariff structure that includes a gratuitous supply of the first 12 units of water to each account.

“…this across-the-board exemption does not differentiate between needy households and those who could well afford to pay for every drop of water.”

On face value, this provision of the water tariff regime makes sure everyone in the city has access to a minimum amount of water for basic survival and personal hygiene needs regardless of his/her ability to pay.  The subsidy money incurred for this purpose is therefore considered acceptable.

However, without taking into consideration the household size and the household income, this across-the-board exemption does not differentiate between needy households and those who could well afford to pay for every drop of water.

Secondly, the freeze in the water tariff level was applied to both the domestic and the non-domestic sectors, resulting in a most ridiculous scenario where taxpayers are now subsidizing the operating costs of all locally-based water bottling companies. These companies are buying water from the WSD at the highly subsidized rate of HK$4.58/m3 and are re-selling that water in bottles at a rate of between HK$7,800 – HK$14,000/m3. 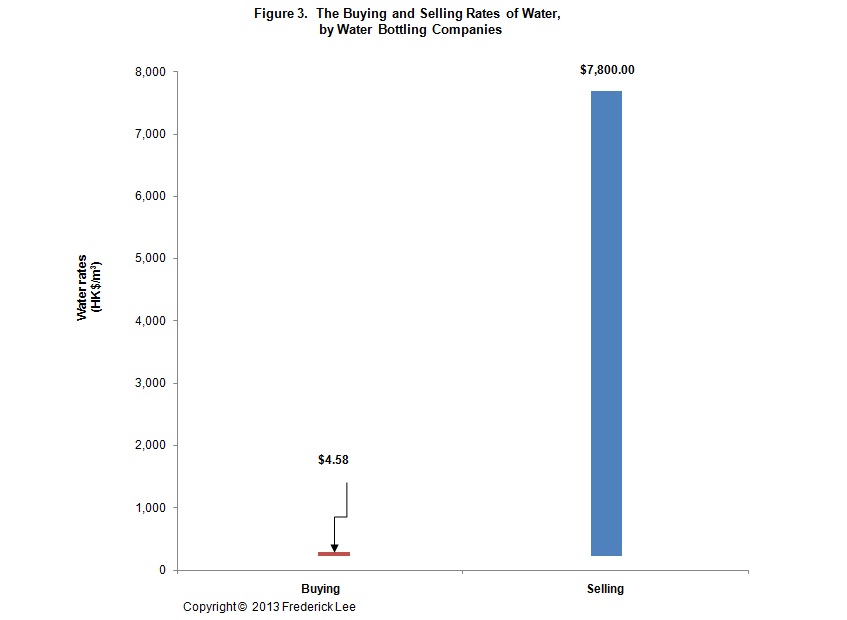 Although the government could keep pumping taxpayers’ money into the WSD to plug the income-expenditure hole, the subsidies have definitely worked against the objectives of water conservation.  While concrete evidence is lacking in regard to how subsidized water rates have created perverse impacts on water users’ consumption behavior, casual observations support the view that subsidized water rates are not conducive to a significant and collective shift towards water conservation-oriented lifestyle and practices.

Water conservationists (including Civic Exchange and Friends of the Earth) have therefore called for the implementation of the “users-pay principle” and have demanded the government to reform the water tariff structure and level, with full cost recovery designated as the target of reform actions.

An analysis of the larger social and political contexts in Hong Kong suggests that policy-makers need to learn to ask the right questions in setting the agenda and the goals of water conservation because, currently, the questions being raised tend to fall mostly into the technology category and they fail to confront and clarify the mis-guided premises that underlie the TWM Strategy.

The first question which requires debate and clarification pertains to the ultimate objectives of reforming Hong Kong’s water tariff structure and level.  Is the government trying to re-gain a certain level of fiscal prudence in the water sector?  Or is it trying to achieve some water parity objectives by re-aligning the subsidies with the truly needy households?  Or is it trying to reform the water tariff regime to fulfill long-term water conservation goals?

“… policy-makers need to know that full cost recovery is not an end in itself; it is only an intermediate goal that helps define the pathway towards achieving the ultimate goal of water conservation.”

Depending on how the ultimate objectives of the water-sector reform are defined, the exact mix of policy tools (pricing and non-pricing) that need to be introduced will vary substantially.  For instance, if water conservation is a higher priority goal than fiscal prudence, then we will need to ask the hard question of how much more the water fee will need to be raised so that specific targets of reduction in total water consumption can be reached.  It is, in all likelihood, that the post-reform water fee will have to be raised above and beyond the full cost recovery level to force users to change their daily habits.  In other words, policy-makers need to know that full cost recovery is not an end in itself; it is only an intermediate goal that helps define the pathway towards achieving the ultimate goal of water conservation.

“A thorough re-examination of the key underlying premises of the Strategy should also be undertaken by policy-makers to assure their constituencies that its promises could be delivered in full.”

Policy-makers also need to ask the question of whether or not there is a limit to the pricing effect on individual users’ water consumption behavior.  To the extent that there is a limit, then tactful political skills are required to incorporate politically unpopular non-pricing tools (e.g., mandatory standards and compulsory requirements) into the policy reform package.  Unfortunately, the institutional arrangements prescribed by the Special Administrative Region’s Basic Law have produced a nominally powerful but factually weak executive branch.  Until and unless the executive branch can mobilize and build strong alliances with key political stakeholders, including legislators, it is difficult to envision the incorporation of non-pricing tools in the water-sector reform repertoire.

To recapitulate, reforming the water tariff regime is a necessary, albeit insufficient, condition to ensure the successful implementation of the TWM Strategy.  A thorough re-examination of the key underlying premises of the Strategy should also be undertaken by policy-makers to assure their constituencies that its promises could be delivered in full.