Double Savings from the Ground Up

Brione Bruce from Asia Clean Capital shares with us how ground energy can save both electricity and water. China’s building sector is one of the country’s largest consumers of water and energy.
Heating and cooling an average commercial building can account for up to 52% of energy and 34% of water use.
Making use of ground energy can give annual water savings for a building of 8,000-12,000 tons.

China’s rapid economic growth and escalating demand for energy have placed the country in the challenging position of balancing robust economic growth with environmental protection and sustainable development. The Government prioritized environmental issues and outlined targets for water, energy and carbon reduction, as well as increased use of renewable energy, in the 12th Five Year Plan. To achieve these goals, China is expected to invest as much as US$770 billion in low carbon energy by 20201. As concerns over water availability in China grow, renewable energy will play an important role in conserving this valuable resource.

China’s building sector is one of the country’s largest consumers of water and energy, and reducing the consumption of both is essential for China to meet national sustainability goals. If the Chinese government is successful in implementing sustainability with respect to buildings, the landscape of China’s building sector may soon change considerably.

Heating and cooling buildings consumes enormous amounts of both energy and water: these energy requirements can amount to over half of a building’s total energy consumption, while cooling can consume up to 34% of a building’s water demand.

Renewable energy technologies can however provide clean heating and cooling to buildings with very significant cost savings and sustainability benefits. Ground Energy (also known as Ground Source Heat Pump or Geoexchange) is an established technology that uses the energy from the ground to heat and cool buildings. It is widely used across Europe and North America and is gaining popularity in China.

Where Does the Water and Energy Go?

The United Nations Environment Programme (UNEP) found that buildings consume one-fifth of the world’s available water.2 In China, the need to reduce water consumption in buildings is particularly pressing as the county’s construction sector continues to develop at a staggering pace. It is now estimated that China’s construction industry accounts for 16% of the country’s total water consumption3.

Figure 1. Energy Use in an Average Commercial Building 7 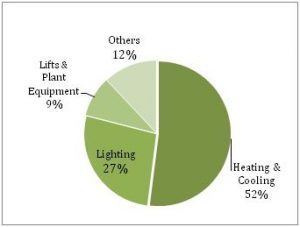 Figure 2. Water Use in an Average Commercial Building 8 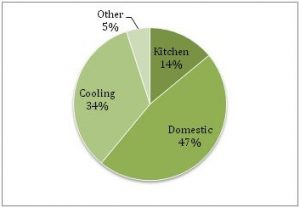 Ground Energy is a proven technology that taps into the free, renewable energy stored in the earth and significantly lowers the amount of energy and water required for a building’s space heating, air conditioning and hot water needs.

A Ground Energy system (also known as a Ground Source Heat Pump or Geoexchange) includes a plant room system that is similar to a central conventional chiller plant, but has the advantage of being able to generate both heating and cooling. The system includes an underground Geo-Exchange Loop system consisting of durable HDPE piping.

During summer, when the ground temperature is lower than the air temperature, the ground is used as a heat sink, absorbing heat from the building. In winter, when the ground temperature is higher than the air temperature, heat energy is extracted from the ground. Clean water is circulated through the closed underground loop system transferring energy from the ground to the building.  The effect is energy savings of up to 40%, equivalent levels of carbon reduction and significant water savings. This can translate into a 20% reduction in overall building energy consumption – a level that no other single technology is able to achieve.

Traditional chiller systems consume water through evaporation in cooling towers, thus valuable water is lost. Ground Energy systems however replace cooling towers,  such that no water is lost to evaporation. This means water savings of 100% for the building’s cooling needs. The same water circulates through the underground loop system year after year, so buildings using Ground Energy have a significantly lower water footprint. With a Ground Energy system, good design is essential in order to ensure greatest efficiency. Ground condition testing, design and installation must be conducted by a team of skilled engineers to optimize the system’s efficiency.

Assuming current energy rates in China9, Figures 4 and 5 provide hourly costs in RMB, energy, carbon and water consumption for a Ground Energy system versus a conventional chiller system for cooling and natural gas for heating. The system capacities for cooling and heating are based on the needs of a 25,000m2 office in Northern or Eastern China.

In the above example, the annual water savings from the Ground Energy system would amount to approximately 8,000-12,000 tons, equivalent to 200,000 domestic showers.

When city heating (the conventional heating source in Northern China) is replaced by Ground Energy heating, carbon savings of 50% can be realized.

Ground Energy Around the World

According to the US Environmental Protection Agency (USEPA), Ground Energy systems are “the most energy efficient, cost-effective, and environmentally-friendly space conditioning systems available.”

There are currently over 3 million Ground Energy systems in operation in 32 countries worldwide. Given China’s continued economic growth there is major potential for the uptake of Ground Energy Systems in China, where the government is actively promoting the technology. Ground Energy systems are best applied in new buildings during construction, though retrofits are also possible, and can be tailored to a wide range of commercial, residential and industrial buildings.

Ground Energy is continues to gain popularity in China due to the combination of tightening environmental regulations and supportive government policies, rising energy prices, declining fossil fuel supply and concerns over energy security. Several multinationals operating in China such as Swire Coca-Cola and Tesco have selected Ground Energy systems for their ability to meet utility needs and sustainability goals.

The Luohe facility is the first of its kind in China to incorporate a Ground Energy system to provide hot and cold water for the production lines, air conditioning and space heating, and heating of the facility’s waste-water treatment plant to speed up the bio-treatment process. Designed, installed and commissioned by Hong Kong and Beijing-based Asia Clean Capital (ACC), the system is a core contributor to the bottling facility’s overall energy and water efficiency, as well as its water savings.

By fulfilling a wide range of heating and cooling requirements, often at the same time, the Ground Energy system is able to operate at very high levels of efficiency, with consequential economic and environmental benefits. When both heating and cooling are produced together, the Ground Energy system can produce up to 9 units of output energy to every one of input electricity.

In addition to the renewable energy provided by the Ground Energy system, the bottling facility has incorporated other green features, including zero waste water discharge. Taken together, these features contributed to the achievement of LEED Platinum certification.

The company’s newly opened logistics centre in Jiashan is Tesco’s largest in China and demonstrates the company’s commitment to green construction. The Jiashan centre expects to use 45% less energy, 40% less water and reduce carbon emissions by 35% relative to conventional logistics developments.  Renewable energy plays an important role in overall energy savings at the centre.

3 The Future of Green Building in China. Found at: https://www.climatechangecorp.com/content.asp?ContentID=6023

Author: Debra Tan
Debra heads the China Water Risk team. She was tasked with taking The Asia Water Project pilot to the next level and was responsible for the direction and build out of China Water Risk portal for ADM Capital Foundation. Debra started her career in finance, spending over a decade as a chartered accountant and investment banker. She has lived and worked in Beijing, HK, KL, London, New York and Singapore. Debra left banking to explore her creative side. She has since pursued her interest in photography and within a year had her first solo exhibition sponsored by a global bank. She also ran and organized hands-on philanthropic and luxury holidays for a small but global private members travel network and applied her auditing, financing and photography skills in the field for various charitable organizations and foundations. Debra believes that we can all make a difference, if only we see the ‘big picture’.
Read more from Debra Tan →
« previous
Water Sense – Water Saving Technologies for Buildings