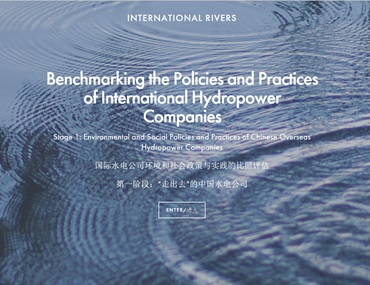 For eight years, International Rivers (IR) has been engaging with Chinese companies to advocate for improved policies and practices and to encourage them to compete for a strong environmental track record. Information supplied to the companies by IR has helped them decide to cancel or mitigate dams they have themselves pronounced “unstable” and “uncontrollable,” and which would have harmed the environment and communities that are dependent upon rivers.
This past summer, IR released the first-ever report that benchmarks and ranks the policies and some of the overseas projects for seven Chinese state-owned hydropower companies. The report is available in English and Chinese. More on the report and the results below.

It provides scientific and evidence-based analysis on these three themes and shows the concern by companies over maintaining a positive image abroad.

Six out of the seven companies were active throughout the process of collecting data from the headquarters and/or arranging site visits to meet with managers and workers at the project sites. Sinohydro, Three Gorges and Gezhouba were particularly engaged throughout the research and compilation phases.
The only company that was not responsive during the research phase was Huaneng, which is working through its subsidiary company HydroLancang to build the Lower Sessan 2 Dam in Cambodia, the largest dam in the country, as its first overseas hydropower project.
But when the report came out HydroLancang engaged with us. It sent top-level executives to Beijing in order to initiate a dialogue with us after coming under criticism by its parent company because the project which was reviewed was the second-worst-performing in the Benchmarking Report.

The Ministry of Commerce was particularly receptive

The Ministry of Commerce was particularly receptive to our work as it is developing a mechanism to encourage Chinese companies to implement better projects even when the legal requirements in host countries are low.
Chinese companies are interested in seeing how they stack up compared with other Chinese companies. They are also interested to know how they compare to international hydropower companies.

The report revealed that there are significant gaps between policy commitments and performance on the ground. Most companies talk the talk, but don’t necessarily walk the walk. The cost is borne by those who can least afford it – rural communities and fragile ecosystems.
As for individual performance, Sinohydro International had the strongest record in both policies and projects. Meanwhile, Huaneng had the weakest ranking for policy commitments and Datang had the weakest ranking for projects.

#1 Sinohydro Int. –  both Policy & Projects
Meanwhile, Huaneng had the lowest ranking for Policy & Datang the lowest for Projects Other key findings are:

With a huge appetite for investing overseas, Chinese companies are interested in finding out how they can improve their reputation and image abroad.

The benchmarking work by International Rivers provides an incentive for companies to compete on their environmental and social track records rather than simply on financial grounds. The Benchmarking Project will be repeated in 2016 and will expand to include non-Chinese dam builders.

Author: Stephanie Jensen-Cormier
Stephanie is the China program director at International Rivers, an organization that was established in 1985 to protect rivers, the environment, and the people which depend upon them. The China program works to protect Asia’s key rivers and promote higher environmental and social standards in Chinese hydropower projects around the world. Stephanie has been engaged in environmental work in China since 2005. Her specialization on China is driven by her conviction of this country’s importance on the global stage. Prior to joining International Rivers in 2015, Ms. Jensen-Cormier was the program director at a China-based environmental education NGO. She has also worked with the International Labor Organization and the China Council for International Cooperation on Environment and Development. Ms. Jensen-Cormier has a Bachelor Degree from the University of Victoria in British Columbia and earned her Master Degree from the Weatherhead East Asian Institute at Columbia University in New York City.
Read more from Stephanie Jensen-Cormier →
« previous
Green Finance Revolution: China Can Lead