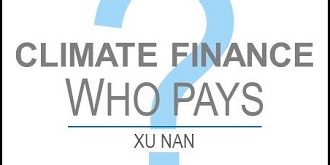 A Paris Agreement was made but a lot of it comes down to money. Xu Nan takes a look at who could pay what At the Paris summit in December 2015, a global agreement has finally been reached – the aim to limit temperature rises to less than 2℃, and even 1.5℃ is possible, above pre-industrial levels, which is, without a doubt, a progressive development in recent years. But how should we understand the agreements on funding? To be more specific, where will the funds come from?

On 7 October 2015, the Organisation for Economic Co-operation and Development (OECD)released the report “Climate Finance in 2013-2014 and the USD 100 billion goal”.

The report estimates that developed countries have provided developing countries with USD 52.2 billion by 2013, raised from both private and public organizations. In 2014 this increased to USD 62 billion. The funding mentioned in the report came from bilateral and multilateral channels, export credit and private organizations.

15 days after the report was made available to the general public, over a hundred organizations from developing countries made a joint statement claiming that the report is flawed, in particular regarding identifying climate finance and some of the statistical methods used for calculation; claiming creative accounting and green-washing had been included in the calculations.

OECD’s report resulted in disagreements on finance responsibility between developed countries and developing countries. The impact of the report also influenced the summit in Paris.

As a matter of fact, terms used in climate change conferences and documents have been changing. After the United Nations Climate Change conference in 2009, in which developed countries promised to provide USD 100 billion climate finance each year in funding for developing countries from 2020 and beyond, a word game started.

There are disputes as to whether “provide” or “encourage” should be used, and whether the funding would be from “public” or “private and public” organizations, and whether the funding should be something “new and extra” other than traditional Official Development Assistance (ODA) . The definition of “public”, “new”, and “extra” were the key words of the USD 100 billion agreement.

According to the OECD report, climate finance mainly comes from bilateral and multilateral channels, export credit and private organizations. Export credit, as a method to boost competence in exporting products, is included in climate finance. When gathering data for the report, OECD let fund providers provide the data, which included the retained earnings from investment in multilateral development banks’ concessional financing. Such statistical method was not convincing enough for developing countries.

Disputes around OECD’s report are all about the MRV (monitor, report, and verification) on climate finance.

To understand this issue better, we first have to know exactly what climate finance is. Yang Yingming, deputy director of the International Finance Department at the Ministry of Finance of China, stated that climate finance is a legal and political concept, different from climate investment and green financing. According to the treaty, climate finance is the “new and extra” supporting fund from developed countries raised through public channels for developing countries.

During the Paris summit, Nozipho Mxakato-Diseko, leader of the negotiation of “G77 + China”, pointed out that climate finance is one of the promised responsibilities written in international law instead of a form of “charity”. Xie Zhenhua, the special representative of the Chinese delegation and the former vice minister of the National Development and Reform Commission (NRDC) stated that treating ‘aid funds’ as ‘climate finance’ does not fit the definition of the treaty.

The methods of climate finance accounting face challenges – it’s hard to define the contribution public funds have made in leading private funds. For example, it’s very difficult to measure how much of private funds were incentivised by the administrative financial fund from the government in China since definitions are ambiguous, and it’s not easy to get data to make accurate estimates.

On the MVR, the Paris agreement stipulates: member developed countries need to release reports on qualitative and quantitative guiding information once every two years and provide member developing countries with estimates on public financial source.

The climate financing gap will only grow larger

According to the 2015 Climate Finance Report of China from The Research Center for Climate and Energy Finance of The Central University of Finance and Economics in 2014 the total amount of global climate finance hit USD 391 billion. This jump from previous amounts is mainly attributed to a boost in private investment in renewable energy.  The contributions of public departments have also increased, but its overall share dropped from 42% in 2013 to 38% in 2014.

The Global Commission on the Economy and Climate (GCEC) calculated that from 2015 to 2030, the investment on infrastructure globally would reach USD 90 trillion, and there would be an incremental investment of USD 4 trillion needed when choosing a low-carbon development path.

The goal of limiting temperature rises to less than 2℃, much less 1.5℃, simply can’t be achieved without adequate financial support.

Globally speaking, whether it is developing or developed countries, climate finance always follows the private-capital-led direction, meaning eventually private financing will become the driving force in late phases. In this case, the original investor-spender relationship will undergo transformation as well.

Big developing countries, like China for example, are becoming more prominent in the field of climate finance

Another tendency is that big developing countries, like China for example, are becoming more prominent in the field of climate finance. Besides focusing on their own climate finance, they are also taking on more responsibility globally. Since the climate summit in New York in 2014, where China announced it would set-up and provide the USD 20 million South–South Cooperation fund in response to climate change, the amount of financing has continued to grow.

Overall, as of September 2015 China’s climate financing stood at RMB 20 billion,  China announced by President Xi in the US-China Joint Announcement on Climate Change. On the other hand, the US also promised to provide USD 3 billion for the Green Climate Fund (a fund within the framework of the UNFCCC).

Influenced by clean development and environmental risks, the global finance market is showing great vitality despite of the harsh environment. The Financial Stability Board (FSB) has established relevant teams dedicated to defining the criteria of risks brought by climate.

In accordance with Standard & Poor’s and the International Monetary Fund, climate finance has been considered as a great risk in state credits. Many investors could adjust their investment in the private and public sectors according to these risks, including that their asset could be stranded.

Standard & Poor’s rating report has already included many risks brought by climate change, pointing out that the primary body of bond rating would be under great influence from environmental issues. Since 2013 the issuing of green stocks has been rising at rocket speed. The volume even reached USD 36.6 billion in 2014, another sign that shows that green finance tools do have great vitality.

The development of green finance in China

In 2015, China has made significant progress in green finance. The ‘General Plan of Ecological Reformation’ and the 13th Five-Year Plan establish the strategic role of the green finance system. Green Finance was established officially in April 2015 and on that very day its member units already accounted for 65% of China’s financial assets and is still expanding. Green Finance helps support many studies and push the making of policies in the field of green finance, and has brought forth the goal of building a green finance system. Additionally, Green Finance also guided the drafting of the Chinese Green Stock Project List.

“China is moving full speed towards green finance in the post-Paris period.”

China is moving full speed towards green finance in the post-Paris period. A week after the Paris Agreement, the central bank, Bank of China, issued an announcement on green finance bond, with appendix on projects supported by green bonds. On December 31, the NDRC issued the guidelines on the issuance of green bonds.

Author: Xu Nan
Xu Nan is the Senior Policy Analyst at the Research Center for Climate and Energy Finance Of The Central University of Finance and Economics. She is a senior reporter, commentator on sustainability issues in China, judge for China Environment Press Award, columnist of Chinese version of Bloomberg business week. She is former deputy Beijing editor of chinadialogue, one of founders of the first column covering sustainability issues in China as senior journalist of Southern Weekly, and consultant for Energy Foundation. She also writes drama on environmental issue in China.
Read more from Xu Nan →
« previous
Societal Relevance of Flood Risk Modelling