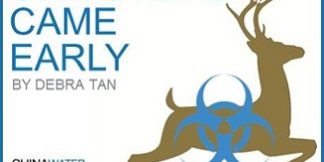 A paradigm shift has happened in 2014. See why Tan thinks Christmas came early for China's waters It has been almost four years since I started working on China Water Risk and this year on 27 October, China Water Risk celebrated its 3rd birthday.  The path towards the protection of China’s water resources has not been always been smooth but this year, there is cause for celebration. Here are three reasons why I think Christmas came early …

This is not just a victory for carbon emissions and better air quality in China, but a win for water. Water is needed to extract and wash coal as well as in coal-fired power generation and since April 2013, we have been saying that thirsty miners will feel the pain. The Water-for-Coal Plan released in late 2013 confirmed our stance and more recently, almost every presenter at the “Coal Consumption Cap & Energy Transition International Workshop” in Beijing in November mentioned water risks during their talks. Around 50% of industrial water use in China is by coal or coal-related sectors so peak carbon emissions/ peak coal is good news for water. China will have to spend to quench coal thirst and whilst it builds alternate energy sources. Whether or not China can achieve these targets it is another story, there are trade-offs between carbon, air quality, water resources & the economy to consider … but for now, at least the intent is there and the path is set.

There has been much movement on both these fronts. First the sticks … daily fines, industrial standards, water quotas & discharge permits. These have been tighten so much so that when looking at looking at water risks across industries, it is not just water tariff hikes we should be worried about. Allocation of water quotas can also be used to drive water efficiency just as daily fines (read how they are calculated here), more stringent industrial standards can be used to deter pollution. As China moves to use these more effectively (read here), industries will be impacted. All these together with the new environmental law coming into effect on 1 January 2015 make for interesting times in 2015. As for the carrots, there have been plenty of these recently as central government moves to relax investments in water, especially in wastewater & pollution clean up. With  central government adopting a “zero tolerance” stance towards pollution and throwing out ‘free money’ and punitive fines, it doesn’t pay to be naughty but nice in 2015.

3.  The beginning of the end of dirty fashion?

We know fashion is dirty and thirsty discharging twice the amount of wastewater discharged than China’s entire coal sector and it is one of the two sectors singled out by State Council to tackle regarding water pollution. Last month, few things happen on this front…

Let’s be clear … we are not saying that China will throw out the entire textile sector, we are saying that it wants a cleaner sector that is circular.

Fast fashion grew up on a proliferation of factories and lax regulations in China, if China is legislating and introducing standards to change these, surely it’s time to relook at fundamentals.

This has nothing to do with environmental factors affecting valuation of brands & factories and everything to do with regulatory risk in China changing the underlying assumptions of the entire business model.

It’s time to look beyond environmental P&L into the real risks at hand.

China 2015: The times they are a-changing

“So let me get this right, you are saying that water issues in China could affect my investments/business even if they are not in China?”

That was pretty much the gist of most of the questions I fielded when I started China Water Risk. This usually came with a raised eyebrow which can generally be translated into “I think you are barking up the wrong tree”. Three years on, hardly anyone questions whether water is a risk. Instead, questions are generally focused on how can the risk be mitigated or investment opportunities in the water sector – latest thoughts on these here.

Recently, the CEO of Norway’s US$860 billion wealth fund stated  that almost all the fund’s investment decisions are affected by what happens in China. This is despite the fact that the fund’s China assets only make up around 1.5% of the portfolio. If he had only mentioned “water risks”, this statement would be perfect. So let me make the link … This year, China’s Premier promised to fight water, air and soil pollution as resolutely as it fought poverty. So if China has managed over the past 20 years to implement all sorts of policies, regulations & laws to massage its economy to this stage to alleviate poverty, why would it not do the same in next 20 years to protect its water resources?

Hang on… China legislating and taking action to protect the environment; now that’s a hard sell. Rightly so, as the country’s past track record is far from exemplary.

“first remember the economy runs on water, then ask if China will bother enforcing to protect its limited water resources”

“We shouldn’t just expect China to act; we should expect it to act ruthlessly to ensure such. “

But is it easy to imagine China legislating to protect her economy? Absolutely.

We shouldn’t just expect China to act; we should expect it to act ruthlessly to ensure such. Maybe it’s time to reframe the question – first remember the economy runs on water, then ask if China will bother enforcing to protect its limited water resources. A paradigm shift has happened – pay attention.

Author: Debra Tan
Debra heads the CWR team and has steered the CWR brand from idea to a leader in the water risk conversation globally. Reports she has written for and with financial institutions analyzing the impact of water risks on the Power, Mining, Agricultural and Textiles industries have been considered groundbreaking and instrumental in understanding not just China’s but future global water challenges. One of these led the fashion industry to nominate CWR as a finalist for the Global Leadership Awards in Sustainable Apparel; another is helping to build consensus toward water risk valuation. Debra is a prolific speaker on water risk delivering keynotes, participating in panel discussions at water prize seminars, numerous investor & industry conferences as well as G2G and academic forums. Before venturing into “water”, she worked in finance, spending over a decade as a chartered accountant and investment banker specializing in M&A and strategic advisory. Debra left banking to pursue her interest in photography and also ran and organized philanthropic and luxury holidays for a small but global private members travel network She has lived and worked in Beijing, HK, KL, London, New York and Singapore and spends her spare time exploring glaciers in Asia.
Read more from Debra Tan →
« previous
Chinese Appetite for Dirty Fashion