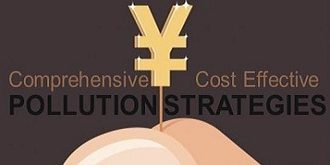 Increasing municpal sewage collection and treatment may more efficient than closing down factories.
Working on an analytical approach and decision-support tool to help Chinese decision-makers select the cost-effective options to reduce discharges.

China has become famous in recent years for its double-digit annual economic growth and rapid urbanization. Unfortunately, this economic success story is paired with serious environmental degradation, especially the pollution of China’s streams, rivers, lakes, and coastal areas. China suffers from growing shortages of fresh water resources and can ill-afford to have its lakes and rivers rendered unavailable for use because they are too polluted. Water pollution takes an economic toll as well; the World Bank has estimated that the overall cost of water scarcity caused by water pollution amounts to about one percent of Gross Domestic Product1. Water pollution is a multi-faceted problem that must be addressed with comprehensive strategies. While China has made great progress in controlling some forms of water pollution, it is now at the point where new, more holistic strategies are needed.

Water pollution is not a simple problem. There are different types of pollutants and a variety of sources.  The most important pollutants that affect water quality can be divided into five main categories. These categories, and their impacts on water quality, are:

China’s strategy for controlling water pollution focused first on reducing the discharge of oxygen-demanding substances. The 11th Five Year Plan (FYP), adopted in 2006 contained binding targets for reducing these discharges.  A water quality parameter known as Chemical Oxygen Demand (COD) that measures the oxygen demand of the organic matter present in a water sample is used to quantify these discharges and the 11th FYP targets are expressed in terms of reducing COD discharges to receiving waters. Reducing the discharge of untreated municipal and industrial wastewater is the best way to reduce COD levels and China has made great progress in collecting and treating municipal wastewater over the past decades4. To achieve the mandatory COD reduction targets, both Central and local governments have adopted a variety of measures, including closing heavily polluting companies, accelerating the construction of new wastewater treatment plants (WWTPs), and upgrading existing WWTP to meet stricter effluent standards (Class I-A)5. These actions also served to greatly reduce the discharge of pathogens to surface waters.

While upgrading additional WWTPs to meet the higher effluent standards would result in additional reductions in COD discharges, it might be better to instead focus on increasing the rate of sewage collection and treatment. There is still a significant amount of uncollected and untreated wastewater being discharged by Chinese cities, and reducing the amount may be more cost-effective than upgrading existing WWTPs.

The Need for New Strategies to Improve Water Quality

Controlling COD and pathogens is not enough. The discharges of nitrogen, phosphorus and sediments are now the most serious sources of water pollution. These emissions must be reduced in order to improve water quality to acceptable levels. The central government has recognized this and has taken the first step by including ammonia reduction targets in the 12th Five Year Plan.  Ammonia is a form of nitrogen that is mainly discharged from agricultural runoff, municipal and industrial wastewater, and emissions to the air from agricultural operations and factories. It exerts an oxygen demand and it can also be toxic to aquatic life, so reducing ammonia discharges will have many benefits. While it is an important first step, setting targets for ammonia reductions must be followed by reducing total nitrogen and total phosphorus discharges, as well as sediment discharges. Otherwise, few water bodies in China will meet the desired water quality standards.

Reducing nitrogen, phosphorus, and sediment discharges will require new strategies and cannot be achieved merely through building or upgrading wastewater treatment plants or closing polluting factories. The main sources of nutrient pollution are nonpoint in nature, with agriculture being the biggest source. The costs of controlling nutrient pollution can be high and attention must be paid to the cost-effectiveness of all proposed measures. Comprehensive strategies that address all sources and sectors, and that consider cost-effectiveness in selecting reduction mechanisms, are needed.

In order to evaluate the cost-effectiveness of various nutrient pollutant reduction opportunities, the World Resources Institute (WRI) is working with Tsinghua University, supported by ADM Capital Foundation, and other partners to carry out a specific project in municipalities within the Tai Lake basin. The goals are to develop an analytical approach and decision-support tool to help Chinese decision-makers select the cost-effective options to reduce ammonia, nitrogen and nutrient  discharges into the water environment, thus helping to improve the water quality of  lakes and rivers in China at lower cost and more effectively.

To do so, the team is creating a database of all available options for reducing ammonia, nitrogen, and phosphorus discharges; analyzing the reduction potential and cost of various options; identifying the key sources which also have the most potential for reductions; and prioritizing reductions by sources (sectors) and/or by reduction measures.

The pollution reduction opportunity analysis can provide a tool that can be used at both the local and national level to select cost-effective nutrient-reduction strategies. The Chinese governments need such a tool in order to make wise investment allocation decisions for nutrient reduction in the 12th FYP.

3 In June 2008, the coastal zone of Qingdao was covered by green algae. This algae bloom threatened the sailing events of the Olympic Games. Source: https://cn.reuters.com/article/chinaNews/idCNChina-1532420080630

4 16 times as many WWTPs were constructed from 2000 to 2009 than were constructed in the previous ten year period. Source: Zhong L., 2010. Development of Chinese Wastewater Sector and Financial Mechanism for Water Environment Improvement, Post-doc Report, Beijing: Tsinghua University

5 According to the National Standards on Pollutant Discharge from Urban Wastewater Treatment Plants (GB18918-2002), Class I-A effluent limits for ammonia and total nitrogen are 5 mg/L and 20 mg/L respectively, and 8 mg/L and 15 mg/L respectively for Class I-B.

Author: Debra Tan
Debra heads the China Water Risk team. She was tasked with taking The Asia Water Project pilot to the next level and was responsible for the direction and build out of China Water Risk portal for ADM Capital Foundation. Debra started her career in finance, spending over a decade as a chartered accountant and investment banker. She has lived and worked in Beijing, HK, KL, London, New York and Singapore. Debra left banking to explore her creative side. She has since pursued her interest in photography and within a year had her first solo exhibition sponsored by a global bank. She also ran and organized hands-on philanthropic and luxury holidays for a small but global private members travel network and applied her auditing, financing and photography skills in the field for various charitable organizations and foundations. Debra believes that we can all make a difference, if only we see the ‘big picture’.
Read more from Debra Tan →

Author: Cy Jones
Cy Jones leads the Water Quality Trading Initiative for the Chesapeake Bay watershed. The goal of this initiative is to advance market-based efforts to reduce nutrient pollution impacting the Chesapeake Bay watershed and to promote the development of a framework for interstate nutrient trading. Prior to joining WRI, Cy had a 24 year career with the Washington Suburban Sanitary Commission in Laurel, Maryland, where he managed the regional and regulatory affairs of the water and sewer agency. He spent the intervening two years since retiring from WSSC as a Senior Technologist with the engineering firm of CH2M HILL, where he worked on developing nutrient trading programs in Virginia, Maryland, and North Carolina. Cy has a BA in Zoology and a MS in Environmental Engineering from the University of Iowa.
Read more from Cy Jones →
« previous
Piggy Bank? Turning Waste into Energy