Rising Drought Risks In The Era Of Climate Crisis

If climate change were a shark, water would be its teeth. Vatter from WWF shares warnings from their latest report 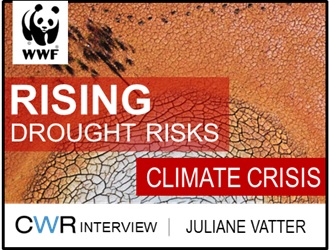 Author: Juliane Vatter
As Water Stewardship Officer, Juliane supports the freshwater work of the WWF German office in Berlin and is responsible for the water management systems of companies within the agricultural sector. She monitors and evaluates water risk analyses of products and supply chains. Juliane holds a MA in International Development and a MSc in Social Ecology from the University of Vienna.
Read more from Juliane Vatter →

To those of us who live in developed regions, droughts & water scarcity seems to be a far-fetched problem to be concerned about. Not anymore – in the new report Drought Risk – The Global Thirst for Water in the Era of Climate Crisis, Juliane Vatter from WWF Germany details how droughts, exacerbated by climate change, has already and will continue to impact all areas of our daily lives – including water supply, agriculture, infrastructure, energy supply, the local economy, and the natural environment.

To better understand how we can cope with the imminent crisis, we caught up with Juliane to learn more about her findings and suggestions.

CWR: Congratulations on the publication of your latest report “Drought Risk – The Global Thirst for Water in the Era of Climate Crisis”. Could you kick us off by telling us why you chose to focus on drought?

Juliane Vatter (JV): Droughts are among the most devastating natural disasters on earth with far-reaching consequences for humans and nature. Each year droughts affect approximately 55 million people worldwide and with them their local water supply systems, their agricultural production, infrastructure, energy supply, the local economy and the natural environment. Droughts can directly lead to water scarcity, crop losses, local food shortages, and forest fires, or indirectly, to migration, unemployment and social unrest.

The direct and indirect impacts of drought permeate all areas of our daily lives. And the fact that we are not sufficiently prepared to handle these challenges, as the world’s population continues to rise, is evident not only by the current disasters in Cape Town and Chennai – the drought year of 2018 shows that we in Germany are also clearly feeling the effects of global warming and are suffering from the consequences. CWR: According to the report, 19% of large cities are already facing a high/very high risk of drought – clearly this will have impacts on sectors. Could you elaborate more on which sectors are most exposed and how?

JV: The sector most affected by droughts and water scarcity is agriculture. More than 80% of the damage and losses caused by droughts are incurred by this sector. That is not such a surprise, because water is at the heart of food production and agricultural practices are therefore highly dependent on weather conditions.

The sector most affected by droughts & water scarcity is agriculture…

This can lead to crop failures, loss of livestock or rising commodity prices. Important staple foods such as wheat, corn and rice, which are very thirsty crops, are exposed to high drought risk worldwide. For example, 22% of global wheat production or around 123.7 million metric tons comes from areas with a high to very high drought risk. This is a problem, as the pressure on freshwater resources continues to increase due to the growing global demand for food.

But also, our energy production is highly threatened. Around 90% of the world’s electricity production is heavily dependent on water. For example, water is needed to generate energy:

43% of the total freshwater abstraction in Europe is used solely for cooling such thermal power plants. Already today, almost half of the world’s thermal power – mainly from coal, natural gas and nuclear power – is produced in areas with a high risk of drought. If coal-fired power plants will continue to be built, the water required by the energy sector in countries of the Global South would rise by 350% in Asia by 2050, 360% Latin America and 500% in Africa. In a world that relies heavily on water-dependent forms of energy generation, more frequent and more intensive phases of extreme droughts lead to acute failure potential! CWR: Germany & Europe are used as case studies in the report. What were the key findings there? Are there any lessons to be learnt for Asia?

JV: Although Europe has a long history of drought, the frequency and intensity of droughts in this century are unprecedented. Especially Southern Europe has to face longer and more frequent droughts, compounded by continuous global warming. Areas that are already suffering from water shortages, are likely to suffer even more in the future. Southern Spain, the border region between Turkey, Greece and Bulgaria, but also southern Turkey, Armenia and Azerbaijan are considered particularly vulnerable.

Extreme weather events will not remain isolated cases. Rather, they become more and more probable as the earth heats up. Here in Germany, too, we will have to expect more frequent, if not regular, droughts in the future. Above-average temperatures and below-average precipitation characterised the drought year 2018 and had serious consequences. Lower harvests, field fires, limited feed supplies – farmers in particular were affected by the continuing drought in Germany. The after-effects of last year’s drought are still clearly noticeable in 2019. This year’s grain harvest has grown under difficult vegetation conditions, as the extreme drought of summer 2018 continued until sowing last autumn.

The EU Water Framework Directive (WFD), agreed by EU governments in 2000, is a holistic piece of legislation that aims to achieve good status of Europe’s freshwater bodies by 2027 at the latest – from our rivers, streams and lakes, to wetlands, transitional and coastal waters. Despite the need of Member States to seriously ramp up their efforts to reach the WFD’s goals, this framework could serve as blue print for other countries. CWR: The report suggested that companies & the financial sector should play a bigger role in countering drought risks. Do you mind sharing with us more on this front and how the private sector could benefit from participating in such actions?

JV: Climate change manifests itself in water. As such, water is not simply an issue of risk. Indeed, understanding water represents one of the largest opportunities for businesses and investors.

Over the past decade, water-related risks have consistently emerged near the top of the World Economic Forum’s Global Risk Report. With 70-80%, the private sector is the largest user of water. CDP have reported growing corporate losses driven by water risks year-over-year that now amount to over USD30bn.

Freshwater is at the heart of economic supply chains and therefore at the heart of economic value creation. In order to ensure their future viability, companies must deal with water in a sustainable manner. For the private sector, water is both a risk and an opportunity. Without it, businesses will fail. Water flows from corporate headquarters, through manufacturing facilities and complex supply chains, to the fields were raw materials are grown.

In order to champion innovative solutions to freshwater challenges, businesses, every level of government, and local communities must collaborate to ensure water is responsibly governed and shared. Businesses need to become water stewards—to go beyond water efficiency practices and lead collective action in river basins around the world.

CWR: How about individuals? What can they do to make a difference as well?

JV: For individuals it is nearly impossible to change anything in regards of the occurrence of drought. People need to adapt and become resilient towards any kind of climate change related extreme weather events. In Germany, Central and Northern Europe, despite local droughts, there is still comparatively sufficient water available and these water resources are comparatively well regulated, for example by the EU Water Framework Directive.

However, we need to be aware of our water footprint and use our most precious resource sustainable. When buying food, be sure to give preference to regional and seasonal products. In this way you reduce the water risks associated with production and support our farmers. Seasonal foods are often fresher and require shorter transport distances if they are also produced regionally. A seasonal diet can also reduce the CO2 footprint of food production, e.g. when greenhouses do not need to be heated or cooled.

Think about your meat consumption. Meat and animal products have a very high ecological footprint compared to a vegetable diet. In particular, the cultivation of plants for animal feed is important. The fewer animal products land on the dining table, the lower the water and CO2 footprint.

Avoid food waste. With every food thrown away, we also throw the corresponding amount of water needed for production into the bin. Buy carefully and only as much as you need or can store well. Donate or give away any food that is left over and still fresh. Try to use everyday products for as long as possible. Can they be repaired or recycled? With every garment or electrical item that we throw away, tons of virtual water end up in the garbage.

Demand transparency and responsible action from companies. Ask companies where their products come from and whether they know the related water risks. Ask whether measures are being taken to reduce water risks in their value and supply chains in a targeted manner. Speak to politicians. Ask the federal government and parliament – for example through your member of parliament – to protect water as a resource. Sign petitions to this effect and support organizations that are committed to water.

CWR: Looking forward, are you optimistic that stakeholders can come together to mitigate rising risks from droughts?

JV: I am positive that we can turn the tight. However, in view of the rapidly progressing global warming and the associated extreme weather events, we need to urgently implement wide-ranging and mutually complementary measures at all levels! This can only succeed if we act in a socially, ecologically and economically meaningful way – and as an expanding world population commit ourselves to sustainable water use.

“If climate change were a shark, water would be its teeth”

The international community must increase its climate contributions in order to limit global warming to 1.5 degrees Celsius. IF CLIMATE CHANGE WERE A SHARK, WATER WOULD BE ITS TEETH. Therefore, water needs to become a priority focus issue for climate change adaptation and mitigation strategies

« previous
No Planet B: HK’s School Strike For Climate Action