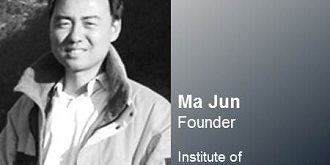 Chinese government has unspoken but clear support for the campaign.
Supported by international NGOs: Pacific Environment and the Business and Human Rights Resource Centre.
HP and Samsung, one of the first ones to respond, with Apple being the surprising laggard.

Author: Ma Jun
Ma Jun was named as one of the 100 most influential persons in the world by TIME magazine in 2006. He is well known for his book, China’s Water Crisis released in 1999, which has been compared to Rachel Carson’s Silent Spring. He directs the IPE (Institute of Public and Environmental Affairs), which developed China’s first public database on air and water pollution.
Read more from Ma Jun →

In April this year, 35 Chinese NGOs, concerned about the growing number of heavy metal poisoning incidents in the provinces of Hunan, Shaanxi, Fujian, Jiangsu and Guangdong, initiated a dialogue with 27 of the world’s leading electronics companies. The NGOs were concerned that these companies’ supply chains were contributing to the dumping of heavy metals in China’s water bodies.

Since the campaign was launched, Ma Jun, director of the Institute of Public and Environmental Affairs, in collaboration with the NGO coalition, have traded emails and letters with companies such as Samsung, HP, Panasonic, Intel, Nokia, British Telecoms, Motorola, Vodafone, IBM. In June, the NGOs released a report detailing the responses the NGOs received from the companies.  A month later, partly in response to publicity generated by US based NGOs Pacific Environment and Business and Human Rights Resource Centre (BHRRC), some of the previously reticent companies began to engage the Chinese NGOs.

Of particular interest has been the Chinese government’s unspoken but clear support for the campaign– the launch of the first report was released at a seminar organised by the Environmental Protection magazine, a publication affiliated with the Ministry of Environmental Protection (MEP). The campaign was also extensively reported in Chinese media by CCTV, People’s Daily, China Daily and China Youth Daily. This tells us two things: First, that the government recognises the issue’s urgency; and second, that it will require support from a variety of stakeholders to resolve it. The coalition of NGOs, according to Ma Jun, has made it clear to the government that they are keen to assist in its efforts to control heavy metal pollution.

Ma Jun talks to China Water Risk about the roots of this campaign, how it has gained ground and the next steps.

CWR:  How did the campaign start? And how has it escalated?

Ma Jun: The whole thing started when we were investigating a series of heavy metal pollution incidents. In September 2009, IPE met product manufacturers to discuss heavy metal pollution, and they were open about their links to brand name companies. When we approached one of their buyer brands, they told us that to review the environmental performance of 5,000 suppliers was too much of an effort for them.

It was clear that we needed more information to convince the brands to take this seriously. We went through IPE’s database to identify companies with heavy metal violations. We found mining companies, tanneries, smelters, chemical companies, and quite a few IT manufacturers. The IT companies (PCB and battery production) involved pretty serious cases. We found that many of these IT companies were suppliers to brand name companies, so we decided to push on ahead with a letter writing campaign targeting these global companies.

We had help from Pacific Environment and the Business and Human Rights Resource Centre, and we were able to mobilize more than 1,000 Chinese consumers to send letters to companies who did not respond to our letters. [Ed’s note: For the list of companies, click here. Steve Jobs received 1,000 letters from Chinese consumers and hundreds more from Americans!

CWR: Why have the consumers taken so quickly to this campaign?

Ma Jun: Perhaps they understand the irony of the situation- that an industry focused on delivering information is lacking precisely this, information. Also, and this is only a guess, it could be that their attachment to these gadgets they use and carry around with them everyday makes this a personal issue.

CWR: Environmental violations are often committed by 2nd tier suppliers, so brands are unaware of these companies. Considering the intricacies of the IT industry’s supply chain, how should companies drill down their supply chain?

Ma Jun: The first step is actually quite simple. Some of the companies we interacted with don’t know the official Chinese name of their suppliers. Which means that they have been unable to use our database to check if any of their suppliers are polluters.

The second step involves rethinking their supply chain management strategy. A good model to use is getting their 1st tier suppliers to commit to addressing their environmental issues, and then reviewing their own supply chain. And the 2nd tier supplier does the same. So you start to go deeper into the supply chain.

CWR: Which companies are moving forward? And which ones need more nudging?

Ma Jun: Both HP and Samsung, one of the first ones to respond, are moving fast– they are working to encourage their 1st tier suppliers to review their own suppliers. Canon and IBM have also responded saying that they have reviewed their supply chain and are addressing the issue. The next step for these companies is to publicly disclose the problems and corrective actions they have taken.

They also need to begin building a system that will allow them to track the environmental performances of companies, rather than wait for NGOs to alert them. We don’t really want to do this! We don’t want to be seen as being anti-corporate or anti-development. We need these companies to make the products we all use.

CWR: What were the challenges to getting companies to respond?

Ma Jun: The secrecy in this industry means companies are less open to dialogue and exchange of information. The customer and supplier relationships are also different and more complex than other industries. Apple, for example, seems to have a policy of not issuing any comments on their suppliers. But they are no worse than others.

Across the board, the industry is secretive and not used to engaging with NGOs. From our experience, we see that “environmental commitments” of many IT companies is empty talk. They tell us that they have a supplier code of conduct that says that if their tier two suppliers have a problem, they will work with their tier one suppliers to solve this. But many don’t even know who their tier two suppliers are.

CWR: Is this fairly common that global companies will respond to Western NGOs before they speak to Chinese groups?

Ma Jun: Again I think this behavior is more pronounced with the IT industry. And also some of the Western NGOs have had more contact with this industry compared to Chinese NGOs, so it’s natural that the IT companies engage them first.

Then there’s also the fact that Chinese NGOs are less respected and trusted because many global companies don’t know many Chinese NGOs. We have much to do in this area. The companies need to communicate more with Chinese NGOs. And we NGOs need to make sure our work is science-based, professional and our overall attitude is collaborative.

CWR: What’s the next phase of the campaign?

Ma Jun: We are coming out with our third report in August which will document the communication with the brands, analyse the progress made and the gaps that still exist, and provide recommendations for corrective actions. This report will also form the basis for consumer initiatives. There’s still much to be done!

« previous
How to Play in China’s Water Sector