The State of China’s Agriculture The situation is bad… China’s limited water and arable land plus rampant water pollution not only exacerbate water scarcity, but also raises concerns over food safety. A worrying 87% of Chinese surveyed by the MEP are worried about food safety and drinking water.

Here is the current lay of the land: water, farmlands & pollution and the multiple strategies central government are employing to ensure food security and safety: So on one hand, there is limited arable land, limited water resources, water pollution and soil contamination; on the other, there is rising demand for food…

Urbanisation: rising demand for food & a growing appetite for meat

Against this backdrop is a population that is rapidly urbanising. Urban residents have grown from 11% of the total population in 1949 to 53% today (2012). In 2011, China’s urbanisation rate exceeded 50% and by the end of 2012, there were 70 million more people living in Chinese cities than in than rural areas.

With Chinese GDP projected to continue to grow at 7-7.5% p.a., the UN estimates the urbanisation rate to be at 61% by 2020. This together with the relaxation of the One-Child Policy could exponentially increase the speed of urbanisation.

Chinese kcal intake has increased steadily in line with urbanization but has plateaued over the last decade. Using the past decade as a guide, we expect food intake to rise to around 3,260 kcals/day, similar to the intake by South Korea today.This has serious implications for food as urbanites spend more on food (see graph).  According to the HSBC report, urbanites already spend 2.6x more on food than their rural counterparts.

China’s affluent has also favoured an increasingly more meat biased diet. We talked about this growing a few years ago in “Agriculture: A Prosperous Ever After” … and today, proteins as a % of the Chinese diet are still rising. Unfortunately, meats are more water intensive than grains and we argued previously that this “Business As Usual” (BAU) scenario is not viable given limited water resources (see here). According to FAO’s “State of the World’s Land and Water Resources for Food & Agriculture” (SOLAW) published in December 2011, to support the additional 2 billion people by 2050, an additional 1 billion tonnes of cereals and 200 million extra tonnes of livestock products will need to be produced every year. This report prompted many to comment that vegetarianism is the way forward much to the chagrin of the meat industry. Two years on, it would appear that the Chinese government is having the same thought: combating rising affluence propensity towards meat by controlling diet mix to save water.

This year, central government has announced policies to optimize the Chinese diet and has indicated that they will tap overseas markets whilst maintaining minimum arable land to support basic grain sufficiency. These policies are expected to supplement the more obvious ones focused on improvements to irrigation, controlling fertiliser use to reduce water use & water pollution in agriculture.

Agriculture policies are key to winning the war on pollution

Echoing Wai-Shin Chan’s views, tackling agricultural pollution is key to winning the war. Water is not only a key input in agriculture but at 63% of national water use, managing water in agriculture is crucial to the total water resources management of China.

Limited farmland and water means that it is imperative to protect farmlands from excessive water pollution be it from agriculture or from industrial wastewater. Controlling water pollution is a key strategy that will “kill three birds with one stone”:

“We will … apply the strictest possible oversight, punishment and accountability to prevent and control food contamination and ensure that every bite of food we eat is safe.”

In practice, small plot size may hamper execution and we see government also trying to implement polices to scale up on this front. We expect government to also focus on reducing pollution from improper application of fertiliser and better monitoring of wastewater discharge from animal husbandry (dead pigs in rivers). But it’s not just agricultural related products that will be in the spotlight… non-agri related industries such as oil, chemicals and tanning will also face increased scrutiny due to high heavy metal discharge.

For these multiple strategies to be successful, environmental law and ministerial oversight reforms must take place. Food safety issues are urgent. Premier Li Keqiang has promised in his speech at the 18th National People’s Congress meeting in Beijing, “We will … apply the strictest possible oversight, punishment and accountability to prevent and control food contamination and ensure that every bite of food we eat is safe.”

Given these, isn’t it time to adopt non-BAU thinking by viewing agriculture & food through a limited water lens. Water policies set can shape and shift the global agricultural trade. 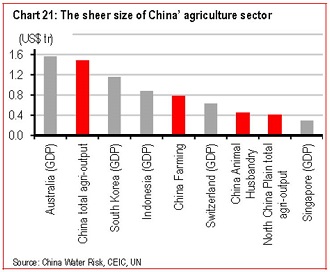 Yes, China’s agriculture may only be 10% of its GDP, but this total agricultural output is almost as large as Australia’s entire economy and larger than the entire economy of South Korea (see graph).  30% of this comes from the Top 4 Farmers which have similar water resources to the Middle East.

Moreover, 40% of China’s USD0.8 trillion farming and USD0.5 trillion animal husbandry output is generated from by The Dry 11.

Whether or not China ‘gets it right’, water & agriculture policies matter – not just for China but for the rest of the world.

Author: Debra Tan
Debra heads the CWR team and has steered the CWR brand from idea to a leader in the water risk conversation globally. Reports she has written for and with financial institutions analyzing the impact of water risks on the Power, Mining, Agricultural and Textiles industries have been considered groundbreaking and instrumental in understanding not just China’s but future global water challenges. One of these led the fashion industry to nominate CWR as a finalist for the Global Leadership Awards in Sustainable Apparel; another is helping to build consensus toward water risk valuation. Debra is a prolific speaker on water risk delivering keynotes, participating in panel discussions at water prize seminars, numerous investor & industry conferences as well as G2G and academic forums. Before venturing into “water”, she worked in finance, spending over a decade as a chartered accountant and investment banker specializing in M&A and strategic advisory. Debra left banking to pursue her interest in photography and also ran and organized philanthropic and luxury holidays for a small but global private members travel network She has lived and worked in Beijing, HK, KL, London, New York and Singapore and spends her spare time exploring glaciers in Asia.
Read more from Debra Tan →
« previous
Thirsty Clouds & Smartphones