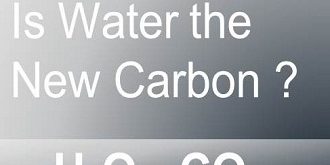 Is Water The New Carbon? CDP Water Disclosure encourages leading listed companies to disclose material information & metrics to investors regarding water risk to company operations and how these risks are being managed. Response to the first water questionnaire was impressive at 50%.

Historically, lack of disclosure by listed companies on a range of ESG issues including water has been a barrier to investors wishing to analyze environmental risk.  That began to change in 2000 with the advent of the Carbon Disclosure Project (CDP), which sent a clear message to companies that investors now viewed carbon as a risk that needed to be managed and disclosed.

CDP started by requesting carbon-related information and metrics from the 500 leading companies in the FT500. By 2010 it was approaching 4,700 companies worldwide.  While the world’s attention focused on carbon, global water scarcity emerged as a significant risk, not just in relation to human survival, but to the millions of companies operating in water-stressed environments around the world.  Recognising the enormous implications of emerging water crises, in 2009 CDP established CDP Water Disclosure.

Based on the same premise as CDP’s Investor program on carbon and climate change, CDP Water Disclosure encourages leading listed companies to disclose material information and metrics to investors both relative to the risk that water presents to company operations and how these risks are being managed. For CDP Water Disclosure’s first iteration, the information request (in questionnaire format) was sent to 302 of the world’s largest companies in the FTSE Global Equity Index Series, focusing specifically on water intensive and water sensitive sectors. The first CDP Water Disclosure Report was issued in the last quarter of 2010.

The response rate was impressive at 50%, with 89% of these companies having developed specific water policies, strategies and plans and 62% identifying water-related business opportunities.  The full report can be accessed on the CDP Website.

As with the first carbon questionnaire, CDP Water Disclosure’s first year did not have broad or in-depth coverage of Asian companies. Looking back, it wasn’t until the fourth information request (2006) that CDP on carbon significantly expanded its scope to include Asia-ex Japan1. Thus 125 Asian companies encompassing  nine countries (China including Hong Kong, India, Indonesia, Malaysia, Philippines, Singapore, South Korea, Taiwan and Thailand) were bought into the CDP fold. By 2010 this universe had expanded to 635 companies.  In 2007, specific coverage of Chinese companies was also introduced. Response rates from Asian companies have, however, generally been much lower than for other regions, although there has been some improvement over the years. 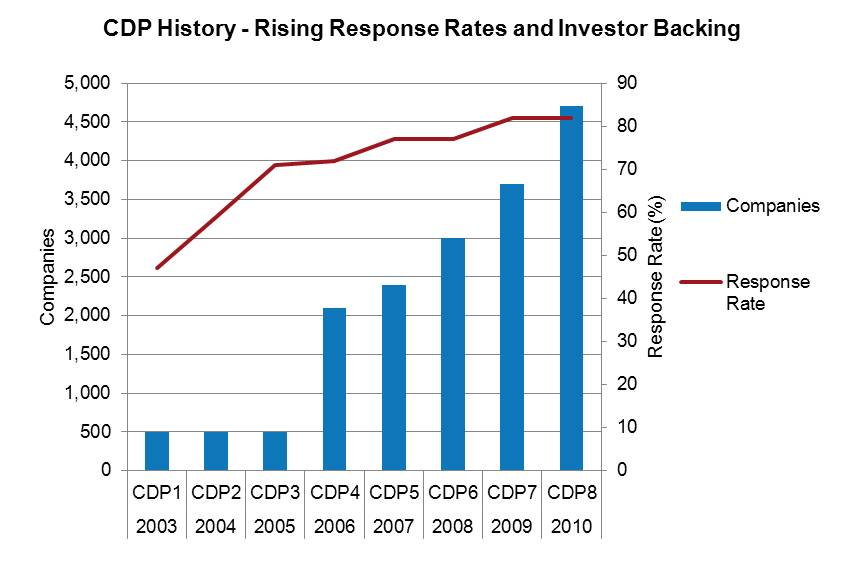 Note: CDP Water Disclosure was initiated on behalf of 137 investors with assets of $16 trillion in 2009. Given the urgency of water crises in the region and the fact that CDP has already paved the way with carbon, we are optimistically looking to CDP Water Disclosure to push disclosure in China further.  To gain additional insight as to where CDP Water Disclosure may be heading, China Water Risk spoke to CDP’s Marcus Norton.  He made clear that given its rapid growth over the past eight years, CDP has been extremely successful in encouraging companies to disclose carbon information to investors. And based on the response to CDP Water Disclosure, it seems that there is an equal interest in water.  Norton attributes this in part to the fact that companies are now used to environmental reporting. They have increased their awareness of sustainability and water-related risks. In addition, an increasing number of companies have gone through the disclosure process with carbon and climate change and can see the benefits of transparency as well as the business case for participating.  As CDP advocates – what gets measured gets managed.

Looking forward and following CDP’s accelerated growth, it’s thus reasonable to expect that we may see CDP Water Disclosure ramping up similarly and coming to Asia in the not too distant future.  Norton points out that this year’s information request (which was sent out on February 1st) targeted a similar water intensive and water sensitive subset of global companies to last year plus leading companies in Australia and South Africa, and there is every intention to expand to Asia at the earliest opportunity. This, however, will largely be driven by the resources available. Indeed, CDP Water Disclosure views Asia as critical, as it will focus on major economies, regions where investors are active and where there are significant water challenges. As such, Norton indicates that Asia is at the top of the list, with eyes on China and India in particular. These are nevertheless challenging regions where the investor lever is not as strong and corporate transparency traditionally has been weak.

On lessons learned by CDP, Norton explained that scoring companies can be a motivator to improve disclosure as companies generally like to outperform their peers.  In 2004 CDP introduced the Climate Leadership Index, which scores respondents to the information request, giving credit to those who have the most comprehensive climate change disclosure practices in place. Such an initiative, however, needs to be timed carefully, as benchmarking introduced too early may discourage companies from engaging with investors in this area.

So where should companies interested in disclosing water-related information and metrics look to find appropriate tools and methodologies? CDP doesn’t endorse any particular tool, since there are many different methods suited to a range of requirements. By way of example, Norton explains that if a company wants to begin to understand its exposure to water stress, the World Business Council for Sustainable Development (WBCSD) has developed a useful Global Water Tool. Similarly, the Water Footprint Network (WFN) has a widely used methodology that can be very helpful for determining water hot spots at a product level.

Leading on from variability in reporting tools, one of the challenges to CDP Water Disclosure’s success is the usefulness of the end product i.e. the data provided for investor analysis. As Norton indicates, companies report metrics in different ways, meaning comparative analysis can be problematic. There is a need then to accelerate the adoption of common metrics. Another related challenge is the importance of local context so comparing data will need careful scrutiny.

On the final question as to whether water is in fact the new carbon, Norton points out, that water security is one of the most pressing challenges for the long term sustainability of businesses and thus the need for transparency is great.

We should remember also that there are significant contextual differences between carbon and water. There is, for example, no substitute for water, while there is for carbon. Water tends to be a local issue and companies can, depending on circumstance, make a difference on their own in addressing water risks; for example, a major water user operating in a defined watershed. On the carbon side, a single company is unlikely to have a significant impact.

Still, what remains clear is that with the pace of development and the urgency of water issues in the Asia region and particularly China , better disclosure is much needed – we hope it comes to Asia sooner rather than later.